Will Bitcoin Cash split? An extended overview of convictions, mind games, and “cheat codes” used by Bitcoin ABC and Bitcoin SV to beat one another.

Born out of the original Bitcoin blockchain on August 1, 2017, Bitcoin Cash (BCH) has split the cryptocurrency community into warring factions with their own arguments, verbal skirmishes, leaders, convictions and occasional get-togethers. On November 15, BCH developers are preparing to undergo its next hard fork, a split of the blockchain, which can give birth to new tokens named Bitcoin SV (Satoshi’s Vision), Bitcoin Unlimited and Bitcoin ABC.

The Bitcoin evolution has been constantly debated within the developers community, who had opposing views on what technology to implement and what rewards miners should receive.

In July 2017, a part of the Bitcoin community, headed by Roger Ver, proclaimed that the adoption of Bitcoin Improvement Proposal (BIP 91) protocol without an increase in the Bitcoin’s block size was a one-sided offering only to those who wished to use Bitcoin for investing, and not as a currency for carrying out anonymous transactions, as had originally been prescribed by Satoshi Nakamoto. Part of the community stepped against the proposed SegWit improvement plan that Bitcoin had intended to introduce to increase block capacity, and declared that they wanted a split of the blockchain. As a result, Bitcoin Cash was born on August 1, 2017.

Three factions’ proposals ahead of the hard fork

The new hard fork scheduled for November 15 has served as another splash of fuel into the bonfire of the ideological debate. In essence, there are three proposals for the implementation of the Bitcoin Cash network in the form of Bitcoin ABC, Bitcoin Unlimited, and Bitcoin SV. Each of these has its own pros and cons.

No “radical changes” to Bitcoin Cash

The Bitcoin ABC split campaign is based on the belief that the basic structure of Bitcoin Cash is “sound”, and “does not need any radical change”. However, improving some of the network features is necessary for its further development, according to the faction’s roadmap. Proposed upgrades include smart contract abilities, oracle services, and scaling improvements, all of which are aimed at reducing transaction costs at its core.

The future development of Bitcoin Cash is seen by the developers as the implementation of three core ideas.

With “Adjustable Blocksize Cap” as the faction’s name and slogan, this most popular Bitcoin Cash client also acts in the interest of node operators and intends to allow them “to adjust their block size limit.” The changes are planned to be implemented by “removing software bottlenecks.”

The Bitcoin ABC views are opposed by the Bitcoin SV faction. Created on August 16 by the Blockchain development firm belonging to Craig Wright, who has previously declared himself Satoshi Nakamoto, the faction actively promotes the idea of radical changing the current Bitcoin Cash structure. Its split is designed to entirely overwrite the network scripts of Bitcoin ABC and increase the block size of Bitcoin Cash from 32MB to a maximum of 128MB, all of which are expected to increase network capacity and scale.

“Because miners should drive the roadmap in the Bitcoin space, CoinGeek and other miners asked nChain to create a professionally-driven implementation of the Bitcoin full node software (for use on BCH) that restores the original Bitcoin protocol.”

Since the proposals of above-mentioned factions are incompatible, the upcoming hard fork may result in the division of the Bitcoin Cash blockchain into two separate blockchains. To minimize risks, Andrew Stone, a leading developer of Bitcoin Unlimited, proposed a compromise solution called “Bitcoin Unlimited’s strategy for the November 2018 hard fork” on August 21.

This upgrade is expected to provide an opportunity to introduce the changes to both Bitcoin ABC and Bitcoin SV, thus giving miners the opportunity to vote for the features they want to see implemented in the hard fork, according to Stone’s proposal.

“There are two changesets proposed for the November 2018 hard fork that have a variety of supporters but can be summarized as coming from Bitcoin ABC and Nchain. It is ironic that these changesets are mutually compatible, yet both groups reject the other’s changes.”

To execute Stone’s proposal, miners will have to switch to the Bitcoin Unlimited client, and then activate the Bitcoin ABC and Bitcoin SV features by voting (BIP 139).

Though Bitcoin SV is supported by only 7 percent of the Bitcoin Cash community nodes, given the CoinDance statistics, it is promoted by Craig Wright, also known as CSW. An Australian computer scientist and entrepreneur, who had previously proclaimed himself to be Satoshi Nakamoto, from time to time was exchanging verbal battles with Jihan Wu, co-founder of the biggest crypto miner and manufacturer, Bitmain.

The latter accused Wright of various things  – from being a Blockstream spy to sending him verbally to “high heaven” for his faked claims.

From the very beginning I have had a conspiracy theory that CSW is a spy controlled by Blockstream.

The whole BCH community are working together to kick Fake Satoshi out. The resisitence against cult leader proves the inner strength and sophistication of the BCH ecosystem!

Wright is not far behind in making public accusations, most of which are related to the code of the hard forks and Bitmain’s business activity.

You are about to learn how weak and in debt Jihan and Bitmain are, they will not last.

Your trust in that shill, just LOL https://t.co/rsvD0rr9Kw

The initial disputes on the Bitcoin’s block size limit seem to have outdone hot political debates. As the hard fork is approaching, Wright’s messages to ABC, Roger Ver, and Bitmain are turning into bankruptcy threats and accusations of being engaged in Silicon Road machinations and child pornography.

Yes, we orphan him and bitmain into bankruptcy

They can piss off to #Dash

They are NOT adding this to #BCH

This is the ONLY real use case they have and it is not happening!

No matter how the two individuals settle their own personal scores, the screenshot of the email where Craig Wright calls Roger Ver his “enemy,” as reported by the latter on November 8, suggests that the hard fork will likely result in a split.

As such, the hard fork scheduled for November 15 may affect the entire network, which in turn may lead to a series of repercussions for the entire market. Given that Bitcoin Cash is trading above $507 as of press time and its market capitalization is $8.8 billion, according to Coinmarketcap. A continued feud between the fourth biggest cryptocurrency communities would have a significant impact on the crypto market in general. If the fork doesn’t go as planned, the effects may be felt by every major market participant from exchanges to other blockchains.

Though seemingly unpopular, Bitcoin SV has its major supporters that would well tip the balance in its favor at the critical moment. CoinGeek is the largest Bitcoin mining pool to date, with a 36.8 percent share of the total Bitcoin Cash network hashrate. 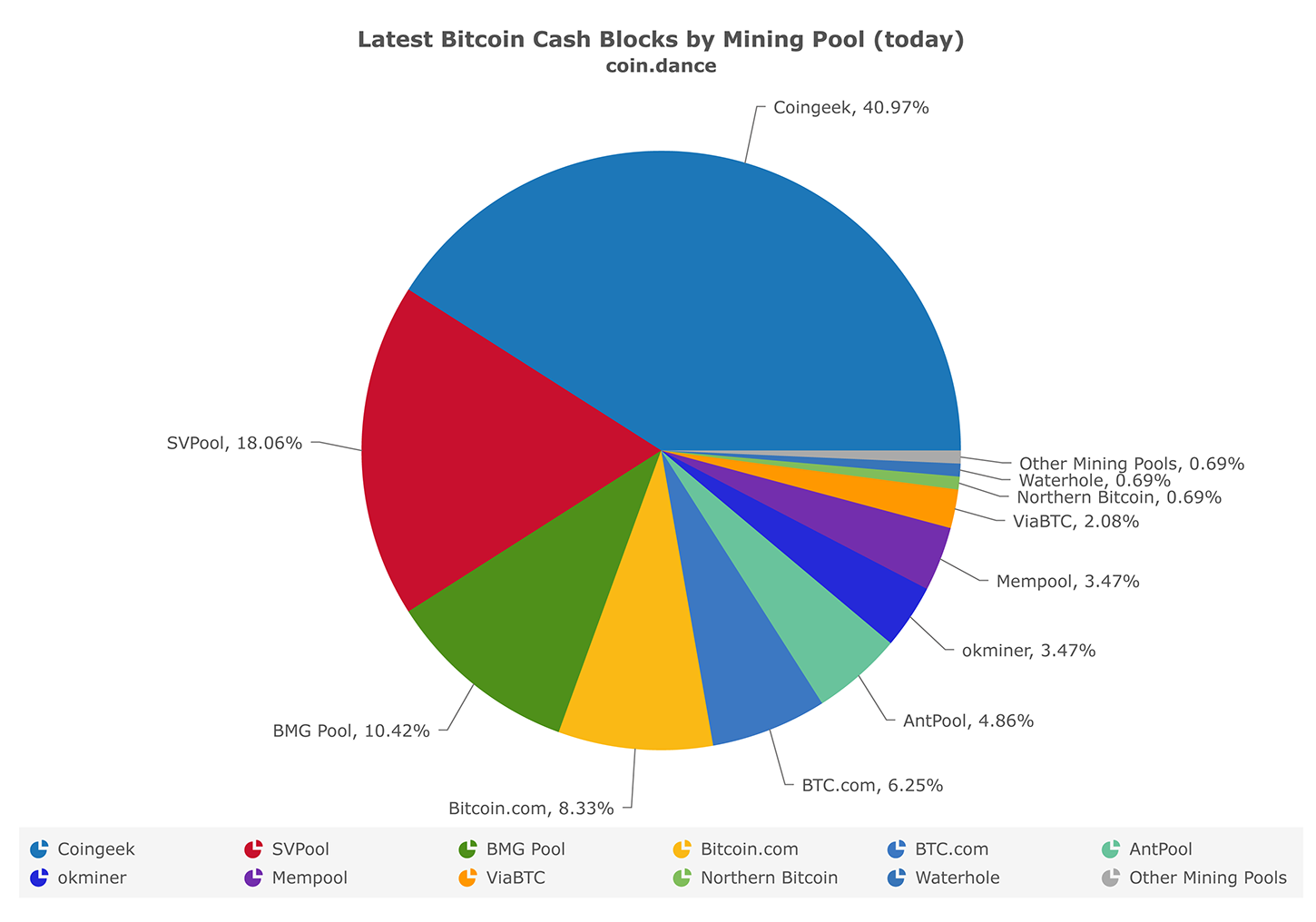 However, the equation may change since a major holder of Bitcoin Cash and a backer of Bitcoin ABC, Bitmain, has recently reached out to “almost all” Chinese mining farms in the coal-rich region of Xinjiang to deploy around 90,000 Antminer S9 miners, as reported by Cointelegraph on November 8. If this deployment succeeds, Bitcoin SV’s CoinGeek pool dominance may significantly reduce.

As the deadline approaches, the compatibility now seen on all available nodes looks more like the breakdown of forces before a major battle, with Bitcoin ABC holding 48 percent, BIP 139 – 34 percent, and Bitcoin SV seeming doomed with 7 percent. In spite of the ideological struggle, 3 percent of public nodes are not in favor of any of the proposed splits.

Following major businesses and miners in their support of one or another candidate, cryptocurrency exchanges have started to announce their positions in the Bitcoin Cash debate. Bitcoin ABC has been preliminary accepted for listing by Binance, Coinbase, and OKEx, while Poloniex announced to support both Bitcoin SV and Bitcoin ABC in case the split occurs.

While “the miners are the most important thing and decide everything for BCH,” according to Twitter blogger WhalePanda, famous for his critics of the Bitcoin’s fork, members of the Bitcoin Cash community have also differed in their votes. While some believe that “helping people split their coins is the most safe option since they get keep both their BCH and BSV coins without accidental transfers,” other vote against the split, and the final results will be shown by the hashrate charts only.