Privacy Coins in 2019: True Financial Freedom or a Criminal's Delight?

What did 2019 bring by way of privacy coins in criminality, how have things changed, and what is the 2020 outlook?

The right to privacy is a fundamental prerequisite for peace of mind and security. The idea that only criminals have something to hide is strange. Contrarily, privacy is sought by almost everyone. Yet, it still gets stigmatized as suspicious — reserved solely for criminals or deviants.

Similarly sharing this unjust scrutiny are cryptocurrencies, which are — rather ironically — branded as a tool for felons, based largely on their anonymous hallmarks. However, no cryptocurrency is as disparaged for this discreet quality more than the privacy coin.

But just what are privacy coins used for? How has crypto criminality changed in 2019? And what's in store for the future?

Is BTC making the cut?

Contrary to popular belief, Bitcoin (BTC) isn't as anonymous as most people assume. The blockchain is, for all intents and purposes, an immutable, publicly held ledger of every single BTC transaction... ever. For this reason, Bitcoin isn't particularly advisable for illegal activity — take note, criminals.

While no personal information can be gleaned from a typical BTC transaction, a quasi-pseudonymous sequence of characters — aka public addresses — are often more than enough to stop criminal activity in its tracks. On more than one occasion, BTC funds originating from a hack or heist have been traced and blacklisted. Moreover, all that stands between an "anonymous" BTC address and a user's true identity is a centralized exchange and a Know Your Customer check.

Of course, there are alternatives. Unlike other digital currencies, privacy coins conceal the information present within a typical crypto transaction. There is no record of the recipient’s or sender's addresses, and the transaction amount remains obscured, creating a decidedly anonymous payment system.

Nevertheless, the fact that these coins allow for the nondisclosure of identity doesn't mean that they were intended for criminal use. The same goes for the people who use them. After all, financial privacy is generally regarded by most as integral. Just as people wouldn't want just anyone to peruse their bank statement, not everyone wants their crypto transactions on record.

There is a scarce amount of privacy in the digital age. Every single crumb of data is vyed over by corporations looking to gather as much information as possible. This is arguably one of the principal reasons for Big Tech's recent foray into the financial industry.

Take Google's latest venture, for example: checking accounts. On the surface, the enterprise looks to provide customers with a broader analysis of their financial lives. However, critics suggest that it's actually Google looking for these insights.

Given this, it's perhaps understandable why the need for an anonymous cryptocurrency arose in the first place. Yet, as with any value-based commodity, privacy coins do allow a sufficient scope for misdeeds. In fact, Monero rose to the mainstream consciousness earlier this year for this very reason.

Back in January, scores of media outlets reported on the abduction of Anne-Elisabeth Falkevik Hagen, wife of Norwegian millionaire Tom Hagen. A ransom note found in the couple's home demanded $10 million worth of Monero. Still, even with this tragedy generating global headlines, Monero's use on illegal darknet marketplaces has stayed relatively subdued.

"While privacy coins offer bad actors a level of anonymity, the liquidity issues and barriers to entry for buying and selling privacy coins make them impractical for most dark market purchases."

“Another trend we are seeing is the increased acceptance of privacy coins such as monero on dark markets where narcotics are available to purchase. Most new markets now accept monero payments, typically alongside bitcoin. This represents a threat to law enforcement's ability to trace this kind of activity and bring those involved to justice."

Incidentally, CipherTrace's report for the third quarter 2019, also unveiled more about the state of crypto criminality in general. According to the researchers, a monumental $4.4 billion in crypto crimes and frauds were witnessed throughout this year, marking an extensive 2,500% increase since 2017.

Regardless of their lack of use on the darknet, a regulative crackdown on privacy coins threatens to unstick anonymous crypto. In June 2019, the Financial Action Task Force instilled an initiative dubbed the travel rule. This required all firms facilitating crypto transfers above $1,000 to disclose customer information.

The rule came into being as a way to combat terrorist financing and money laundering via cryptocurrencies. However, skeptics perceived the policy as a direct impediment to financial anonymity. As a result, many exchanges have been left with no choice but to give privacy coins the boot.

Many privacy coins have suffered losses as a consequence of this. Dash, for example, cites a 76% retrace after its OKEx delisting, and Monero took a 59% hit from a peak of $111 in June following a booting from both ByBit and OKEx. 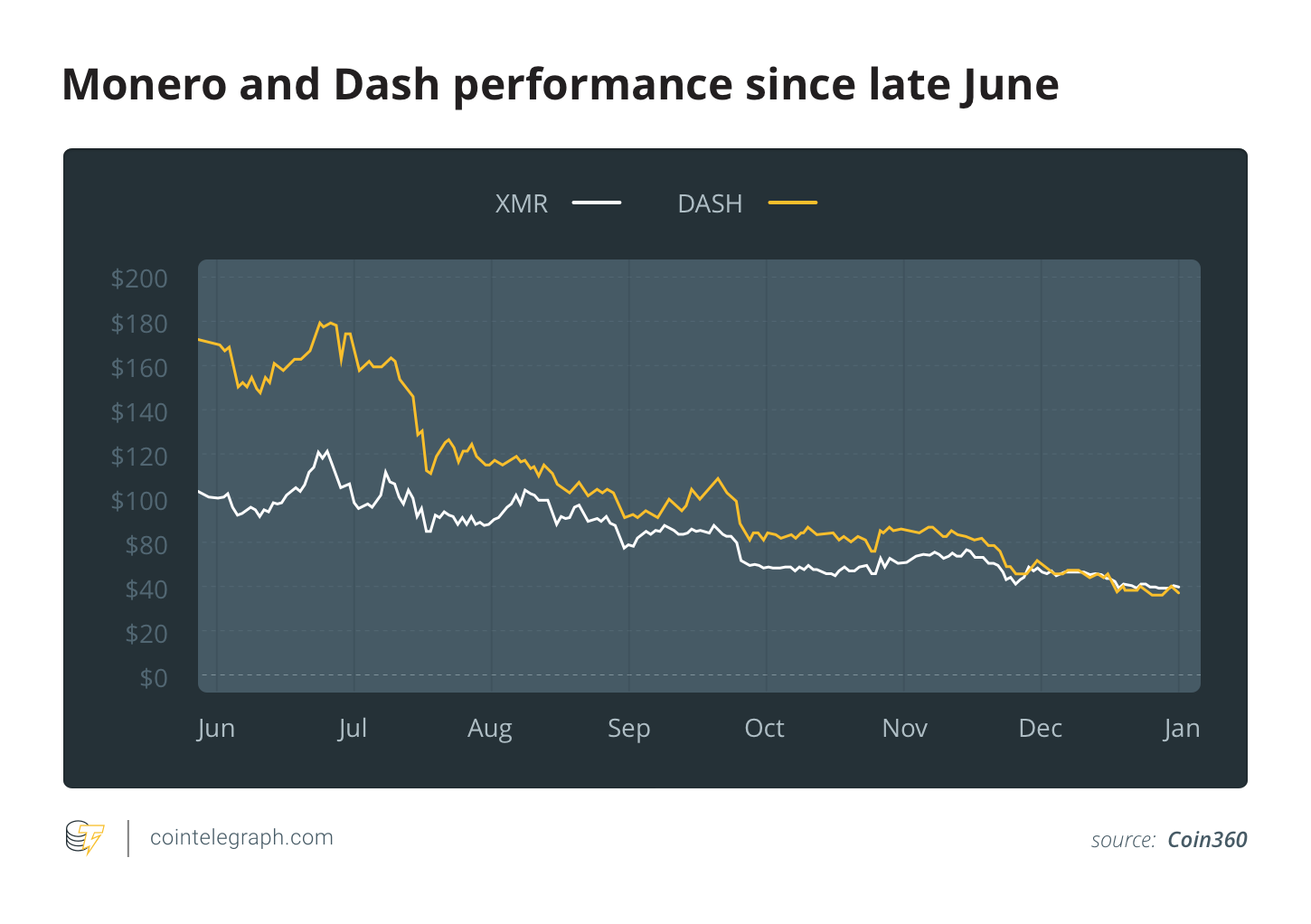 During a conversation with Cointelegraph, Jonathan Levin, co-founder and chief strategy officer of blockchain analytics company Chainalysis, maintains that it isn't just a loss of liquidity to blame, but also a lack of regulatory compliance:

"We believe that the market decides, and currently, the non-privacy coins see the most momentum. This maintains a balance because they can be investigated when associated with illicit activity, but that requires resources and work."

Regardless, according to Jefferies of CipherTrace, regulation — particularly AML practices — appears to be the key to lessening crypto crime:

"CipherTrace research has demonstrated that illicit Bitcoin is 39X lower in jurisdictions with strong anti-money laundering controls. So, regulation does quell criminal activity in crypto."

With crypto criminality on the rise but the usage of anonymous coins plateauing on the darknet, one question remains: What are privacy coins actually used for?

In order to definitively answer this question, there needs to be a tool to trace the coins in the first place. However, one hindrance remains, they're pretty much untraceable.

Thanks to the various algorithmic processes employed by privacy coins, such as Monero, Zcash and Dash, tracking specific addresses is close to impossible — at least, for now. Without a firm trail on activity, pinning down use cases and user demographics becomes difficult. However, that doesn't mean people aren't trying. Levin admits that privacy coins are an "active area of research," adding, "we often find ways to trace the 'untraceable.’" Indeed, the solution may already be right under their noses.

Florian Tramèr, a researcher of cryptography at Stanford University, recently uncovered a fatal flaw within Monero and Zcash. Concocting a remote side-channel attack that targeted the receiver of the coins, Tramèr exposed both the identity of the payee as well as the user's IP address. Both Monero and Zcash have since patched the vulnerabilities. However, that doesn't mean the same can't be achieved again.

So, if blockchain forensics firms manage to make the breakthrough of private coin traceability, should it be employed?

The right to privacy is a fundamental one. Undermining this right could present numerous issues and repercussions for both investors and the crypto industry in general. Jefferies believes that an analytical approach should be employed:

For Chainalysis, the right to privacy is a balancing act, as Levin told Cointelegraph:

As for the future, trends and precedents set in 2019 and years before will likely endure. It can be expected that a harsh crackdown on money laundering via cryptocurrency will take place, which will of course negatively impact privacy coins. Moreover, given its monumental rise thus far, it's fair to assume that crypto crime will also increase.

Levin agrees with this notion, hinting that a particular emphasis will be placed on investors raising awareness of crypto illegality and methods to combat it:

"We think 2020 will be the year that financial crimes such as tax evasion, market manipulation, and facilitating money laundering comes into focus for cryptocurrency stakeholders. Blockchain analysis will continue to be used to meet regulatory obligations and investigate crime."

Jefferies of CipherTrace, by contrast, looks to foreign affairs, hinting at a continued effort to evade U.S. sanctions:

"I expect cryptocurrencies to take on a more important role on the geopolitical stage as North Korea, Iran, Russia try to leverage crypto to circumvent the superiority of the US dollar."

As for privacy coins, it seems investors will have to temper their expectations going forward. Nevertheless, regulatory obstacles rarely keep cryptocurrencies pinned down for long. At the very least, the core benefit of privacy coins will persevere as long as there is someone in need of them.