Report: Facebook Secures Support From Dozens of New Firms for Its Crypto Project

Social media platform Facebook has reportedly secured support from dozens of players in the cryptocurrency and blockchain sector for its forthcoming digital currency.

Social media platform Facebook has reportedly secured support from dozens of players in the cryptocurrency and blockchain sector for its forthcoming digital currency. The overall roster was announced by technology-focused media outlet the Block on June 14.

Earlier today, news broke that Facebook has allegedly sealed backing from over a dozen firms that include Visa, Mastercard, PayPal and Uber for its soon-to-be-unveiled cryptocurrency project, dubbed “Libra.” Together, these investors form the Libra Association.

The materials cited by the Block indicate that the consortium formed to govern the project will also include investors such as venture capital firms Andreessen Horowitz and Union Square Ventures, cryptocurrency exchange Coinbase, and non-profit organizations including Mercy Corps. Among other members, the news outlet named stakeholders from various industries, including telecommunications, e-commerce, and media.

The full list of the Libra association founding members, which Facebook is reportedly planning to announce next week: 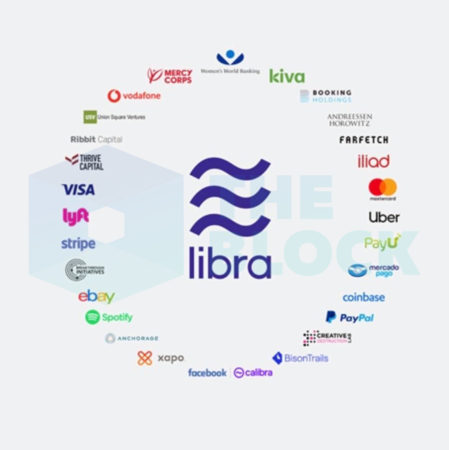 A source familiar with the matter told the Block that the company is aiming to attract 100 members in the governing consortium. If all goes according to plan, Facebook will purportedly secure $1 billion from the 100 participants as it is reportedly charging each member $10 million to manage their own node.

Earlier today it was announced that Facebook had hired Standard Chartered Bank’s head of public affairs Ed Bowles in anticipation of the greater regulatory scrutiny in Europe over its plans to launch its crypto asset and other financial services to its 2.4 billion users. Bowles will join the company in September, and is set to serve as the company’s London-based director of public policy.

Today, global investment bank RBC Capital analysts Mark Mahaney and Zachary Schwartzman said that Facebook’s long-rumored stablecoin project “may prove to be one of the most important initiatives in the history of the company.”