Adoption of Bitcoin payments by Kroger and Starbucks may be tipping point for crypto.

It's no secret that cryptocurrencies don't receive many plaudits in the mainstream media as reliable means of payment. Critics have even claimed that Bitcoin "sucks" as a payment mechanism.

Yet, despite that blinkered skepticism, cryptocurrency payments actually grew last year. Payment processor BitPay reported a "record" $1 billion in transaction revenue in 2018, with its business-to-business (B2B) operations increasing by 255 percent compared to the previous year. Meanwhile, the use of cryptocurrencies in such economically unstable countries as Venezuela and India has surged, as people turn to the likes of Bitcoin and Dash to escape from increasingly worthless national currencies.

These are all encouraging developments, and they've become more encouraging in recent months, with growing interest in crypto payments from major retailers. From Kroger to Starbucks and Rakuten, big corporate names have begun flirting with Bitcoin and the Lightning Network as a payment channel, as well as with other cryptocurrencies. Their interest comes amid rising disenchantment with legacy payment systems, stoking hopes that a few more big converts to crypto payments could provide an all-important tipping point toward widespread adoption.

However, while events appear to be moving in the right direction for crypto payments, experts agree that it will take more than a few isolated use cases before the industry will see adoption on a larger scale. Added to this, payment interfaces need to be improved and made more consumer-friendly. It's only with the combination of technological effectiveness and corporate adoption that the global public will begin using crypto as money.

At the beginning of March, supermarkets giant Kroger — the 17th-largest company in the United States — revealed that it would stop accepting Visa credit cards at over 250 of its stores. "Visa has been misusing its position and charging retailers excessive fees for a long time," said Kroger executive VP Mike Schlotman in a statement, with the retailing giant also explaining that Visa’s fees were the highest of any of the credit cards it accepted.

What's interesting about this episode is that members of the crypto community quickly swooped in to make the case for Kroger to accept Lightning Network payments. On Twitter, Morgan Creek Digital founder Anthony “Pomp” Pompliano reached out on March 2 to the retailer's leadership team, stating that the "Morgan Creek Digital team will fly to meet them and get them hooked up with the Lightning Network nationwide." Even more interesting, Pomp followed this up on March 3 with a tweet announcing that he had just "finished up first call with someone on Kroger Digital team," and that his followers should "stay tuned" for more updates.

It's hard to say just how far Kroger will run with Pompliano's offer, yet industry figures are more or less unanimous in their views that adoption of Bitcoin payments by a giant like Kroger would be a watershed moment for the industry.

"Adoption of Lightning Network by a major retailer would definitely be a big deal for the entire crypto space," says Vilius Semenas, the chief commercial officer at crypto-payment processor CoinGate. "For bitcoin, exposure to real consumers on such a scale could only do good and pave the way toward another level of adoption."

According to Semenas, there's certainly an appetite among major retailers for a new payment network to replace legacy systems. "The card payments industry is unique in that Visa and MasterCard control the lion’s share of the consumer base," he told Cointelegraph. "At the same time, innovation adoption in this space takes a long time because the market is two-sided and needs adoption from both consumers and retailers. Retailers are naturally frustrated, because they have little-to-no ability to affect card payments, and they would probably turn to alternative payment rails if they could."

CoinGate isn't the only crypto-payment processor who suspects that such retailers as Kroger would prefer to move to more efficient and cost-effective payment systems. BitPay's director of product, Sean Rolland, also told Cointelegraph much the same thing, even if he suspects that it will be a long time before existing systems are replaced by crypto-based alternatives. "No business enjoys high fees," he said. "Legacy payment systems are not going completely away anytime soon, but retailers should always be evaluating better solutions."

Aside from Kroger, there are signs that other big players are entertaining the idea of moving to the Lightning Network and crypto payments. Most notably, Starbucks will begin accepting Bitcoin payments at its U.S. outlets by the end of 2019, according to industry rumors. This acceptance comes as part of an equity deal with Bakkt, a cryptocurrency exchange and payments platform being launched later this year by Intercontinental Exchange (ICE), the operator of the New York Stock Exchange (NYSE).

Back in August, the coffee giant was revealed as one of Bakkt's key partners, alongside Microsoft and consultancy BCG. According to the press release announcing Bakkt and its partnerships, Starbucks would not only be working with Bakkt to create its platform, but it would also be using the platform to accept crypto payments. In other words, even though the latest reports regarding Starbucks' imminent acceptance of Bitcoin payments are unconfirmed, the company itself had already confirmed that it will be doing this sooner or later, as explained in August by its VP of partnerships and payments, Maria Smith.

"As the flagship retailer, Starbucks will play a pivotal role in developing practical, trusted and regulated applications for consumers to convert their digital assets into US dollars for use at Starbucks," Smith said on the occasion of Bakkt's announcement. “As a leader in Mobile Pay to our more than 15 million Starbucks Rewards members, Starbucks is committed to innovation for expanding payment options for our customers."

This is precisely the arrangement that's now rumored to be launching toward the end of the year. Reports indicate Starbucks will accept Bitcoin payments at its American outlets, but it will immediately convert these to fiat, as indicated by its initial press release from August. So even though the exact launch date hasn't been confirmed, this will prove a massive boost to Bitcoin and crypto payments, and it's hard to imagine that other big companies won't follow Starbucks' lead.

Right now, there are no firm signs that other retailers as big as Starbucks or Kroger will begin accepting crypto payments anytime soon. However, there are a steady supply of slightly less high-profile companies (less high-profile in the U.S., at least) that have begun accepting such payments, or which will do so soon.

In November, Birks Group — one of Canada's largest and oldest jewellery retailers — announced that it had begun accepting Bitcoin at eight of its 30 stores in Canada. And in January and February, it became increasingly likely that Rakuten — Japan's largest e-commerce website — would begin accepting crypto, after it established a new payments subsidiary and announced an update to its Rakuten Pay app that would feature support for cryptocurrency payments.

You can still count such companies on one or two hands. However, given their size and clout, their movements into crypto payments are likely to put greater pressure on their rivals to act similarly. As BitPay’s Rolland affirms, "The more retailers that accept bitcoin, the better." 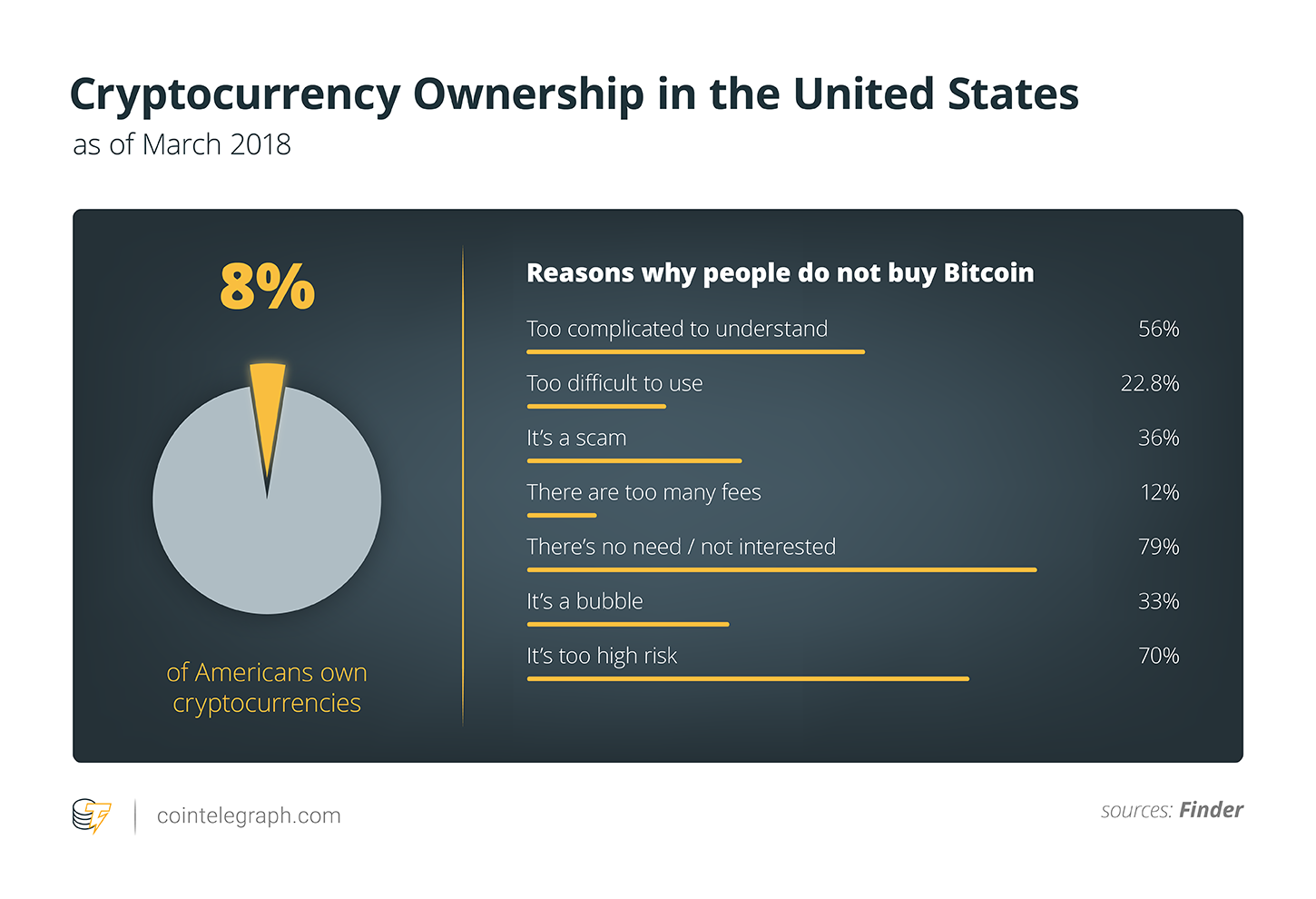 The path has hurdles

Acknowledging that many retailers are looking for new payment channels, CoinGate's Vilius Semenas nonetheless warns they're not likely to adopt any channel that doesn't already boast a critical mass of users. "The problem is that there isn’t a payment system adopted widely enough by consumers," he said. "And it is virtually impossible to get consumers to effectively switch to another payment form other than cash."

This is arguably why there aren't more retailers like Kroger, Starbucks and Rakuten, since only around 5 percent of Americans own at least one kind of cryptocurrency. It's also why it might be unwise to get too excited about Kroger or Starbucks providing a “tipping point” for crypto payments, since without mass ownership of cryptocurrencies, other companies aren't likely to be swayed too much by the examples these pioneers set. Again, this is a point made by Semenas, who notes that other instances of adoption haven't resulted (at least, not yet) in waves of copycat behavior:

"Whether this could become a ‘tipping point’ leading to a cascade of other merchants starting to accept bitcoin is uncertain. A few months ago, Ohio adopted bitcoin payments for taxes, for example. But it didn’t lead to other states doing the same yet. It would likely depend on the results of the experiment."

"In an ideal world, for a retailer like Kroger, Lightning Network would be the perfect solution to accept consumer payments in a secure, cost-efficient way. Actually, it might be even the only solution that would enable worldwide payments on a scale that Visa and MasterCard currently provide. The major barriers to this would be consumer-friendly technology and convenient interfaces to transact money at the point of sale, rather than capacity constraints of the Lightning Network technology itself."

These words of caution aside, Semenas nonetheless believes that "it is most probably just a matter of time for user-friendly applications to get developed." And given that Lightning Network was conceived as recently as 2016 and launched in beta only last March, it has already come a long way. There's no reason to think that it, Bitcoin and other cryptocurrencies won't go even further in the future.