All but two of the top 100 cryptocurrencies by market cap have fallen over the 24-hour period, with total market cap down to $274 bln as of press time.

June 13: all of the top ten coins by market cap have fallen by between 9 and 14 percent over the 24-hour period, as Coinmarketcap data shows. Bitcoin (BTC) has taken an over 11 percent negative hit, trading around $6,449 to press time, bringing its monthly losses to almost 25 percent.

The leading cryptocurrency has now fallen below what some commentators consider to be an average BTC mining profitability threshold of $6,500. Robert Kelly told CNBC earlier today that this figure assumes that Bitcoin miners need to update their hardware almost every 18 months, bringing the costs of mining to roughly between $5,900 and $6,000.

Mining profit margin calculations globally have indicated a wide threshold, ranging between an extremely cheap $531 in Venezuela to a whopping $26,170 in South Korea. Aside from hardware costs, the local cost of electricity supplies is the other key factor affecting miners’ profits. 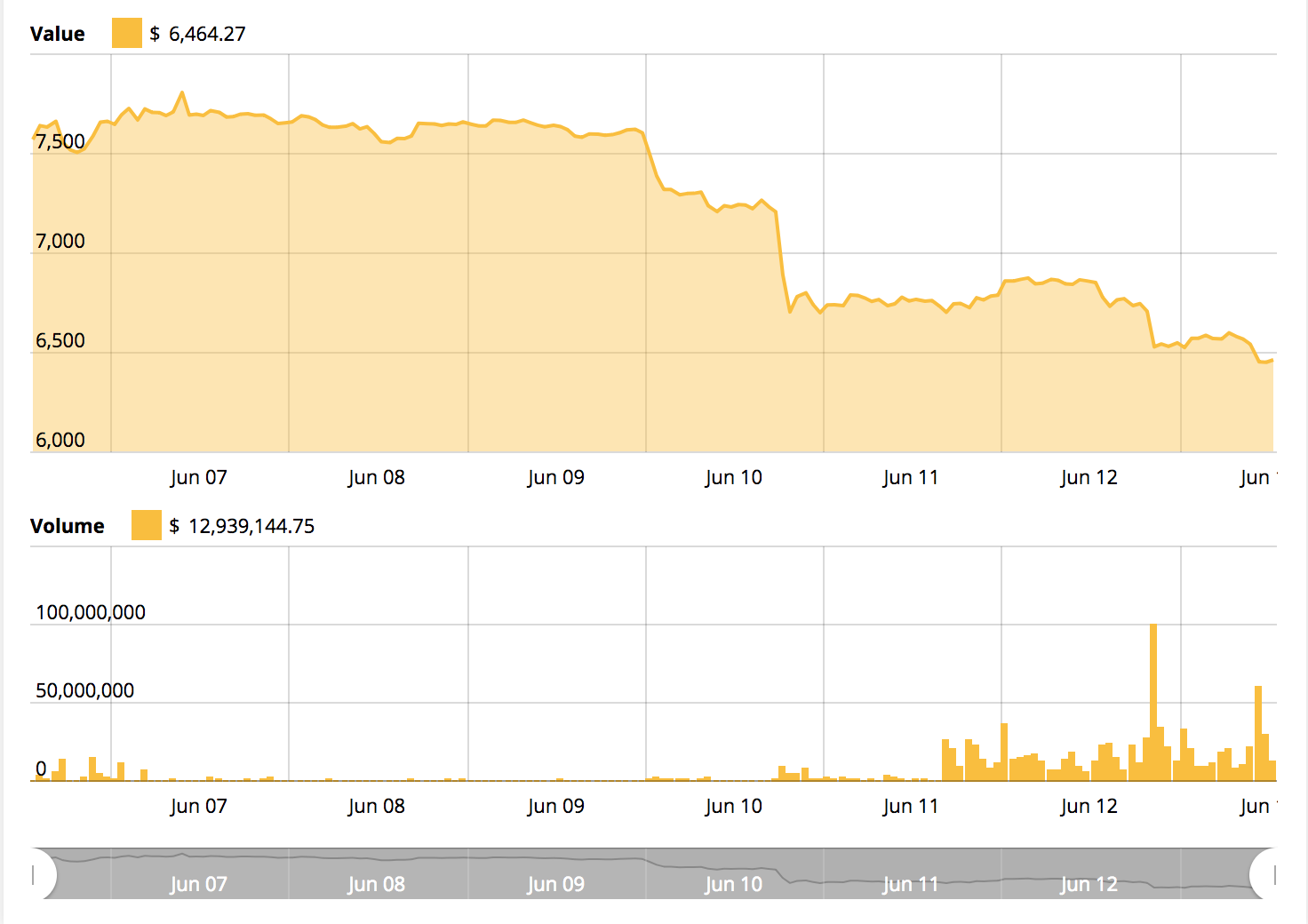 As of press time, Coinmarketcap data indicates 24-hour BTC trading volumes of $4.8 bln, up from their intra-weekly low of $3.8 bln.

Top altcoin Ethereum (ETH) has fallen over 10 percent in the 24 hour period, trading around $475 to press time. The coin has broken below its recent round figure low of $500, losing over 30 percent of its value in the last month. Of the top ten coins, IOTA (MIOTA) has suffered the heftiest losses, falling over 13 percent in the 24-hour period, trading at around $1.21 to press time.

The significant dip comes despite yesterday’s demonstration of a new Proof-of-Concept (PoC) to use IOTA’s Tangle system for Volkswagen’s new “Connected Car” systems at the major technology Expo Cebit ‘18 in Hanover, Germany.

Of all the top 100 cryptocurrencies on Coinmarketcap’s listings, only 2 altcoins, Decentraland (MANA) and Emercoin (EMC) - ranked 94th and 95th respectively - are comfortably in the green.

Tether (USDT) is just about stemming losses to see a negligible percentage point change over the 24-hour period, with a negative fluctuation of 0.06 percent as of press time.

Earlier today, Circle CEO Jeremy Allaire emphasized the future importance of fiat-backed stable coins such as Tether for denominating financial contracts in a global tokenized economy. Allaire underscored their potential for use cases that require a less volatile price baseline - citing debt obligations as one example - but can still benefit from the decentralization and security of a blockchain infrastructure.

Total market capitalization for all cryptocurrencies is around $274 bln to press time, down from their close to half-a-trln figure in early May.

The markets’ grim performance earlier this week drew considerable attention from international mainstream media, including Bloomberg, the Wall Street Journal (WSJ), Reuters, and the Guardian, who all attributed crypto losses to news of the hack of minor South Korean crypto exchange Coinrail over the weekend.

While short-term factors affecting the bearish market remain hard to pinpoint, news of a minor exchange hack is an unlikely explanation for significant FUD – Fear, Uncertainty, and Doubt.

Notably, this week has seen a wave of crypto-regulatory news, including reports that the U.S. Commodity Futures Trading Commission (CFTC) has been demanding extensive trading data from major U.S. crypto exchanges to investigate whether price manipulation might be compromising prices in Bitcoin futures markets.

The Canadian government has also this week released an official draft of new regulations for crypto exchanges that seek to address a “number of deficiencies” outlined by the Financial Action Task Force (FATF). The new measures will reportedly aim to strengthen Canada’s Anti-Money Laundering and Anti-Terrorist Financing Regime (AML/ATF).

Yesterday, further news from the FATF revealed that the international watchdog will start developing binding rules for crypto exchanges in June, as an upgrade to the non-binding resolutions which were adopted by the FATF in June 2015. The FAFT will reportedly evaluate existing guidelines on AML measures and the reporting of suspicious trading activity.

Yesterday, Cointelegraph auf Deutsch reported on fresh comments from the President of the Federal Financial Supervisory Authority in Germany (BaFin) who stated that the regulatory authority:

“[would] not be able to protect every single investor from his fate, and that cannot be the task of state supervision. Once again, the maxim is that we must act prudently or regularly if financial stability as a whole is threatened or if consumers are systematically harmed."

Whatever may be pushing markets down, the crypto community has been actively mulling responses to the situation:

No one said it was easy.
What about you?

My message to our Crypto Community for this morning. A heartfelt communion: pic.twitter.com/3GrNWy7BC7