Bitcoin Briefly Breaks Over $4,000, Bitcoin Cash Sees Gains Near 20 Percent on the Day

Crypto markets mirror Ohio’s green light to offer taxpayers a Bitcoin payment option as the top currency breaks back over $4,000.

Monday, Nov. 26: crypto markets have seen a strong flush of green amidst the recent news that the U.S. state of Ohio is poised to become the first state to accept Bitcoin (BTC) for tax payments.

Virtually all of the top 100 cryptocurrencies by market share are seeing a sufficient rebound over the past 24 hours, with Bitcoin Cash (BCH) growing the most by almost 20 percent on the day. 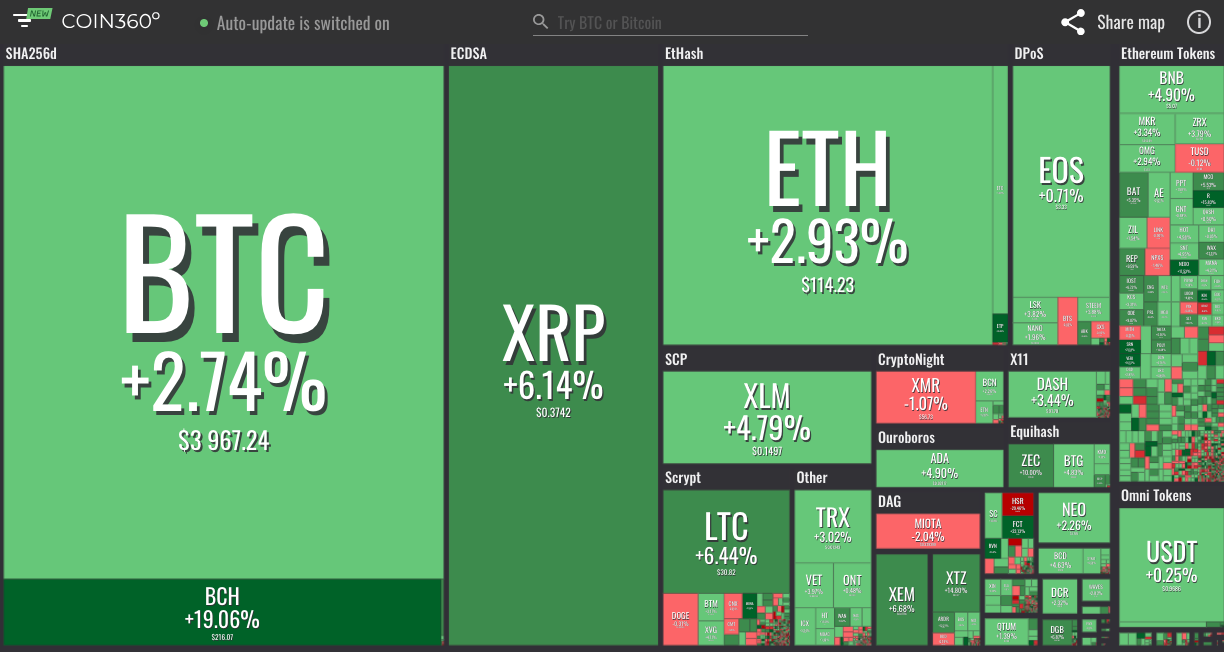 Yesterday, Nov. 25, Bitcoin dipped below the $4,000 threshold for the first time since September 2017, while total market capitalization dropped to as low as $119 billion.

Another sell-off of the crypto markets was followed by the pro-Bitcoin news from Ohio, as state treasurer Josh Mandel claimed that he “do[es] see [bitcoin] as a legitimate form of currency,” and stated that he is willing to “plan[t] a flag” for Ohio in terms of the national adoption of crypto. According to the Wall Street Journal, the move initially applies only to businesses, but there are plans to extend the offering to individual taxpayers in future.

After plunging to as low as $3,601 yesterday, Bitcoin has broken $4,000 support earlier today, trading at $4,120. The major cryptocurrency is again trading around $4,000, up around 3.2 percent over the past 24 hours. As of press time, the major cryptocurrency is trading at $3,975. Bitcoin is still down around 25 percent over the past week, and Bitcoin’s dominance on the markets constitutes around 53.7 percent. 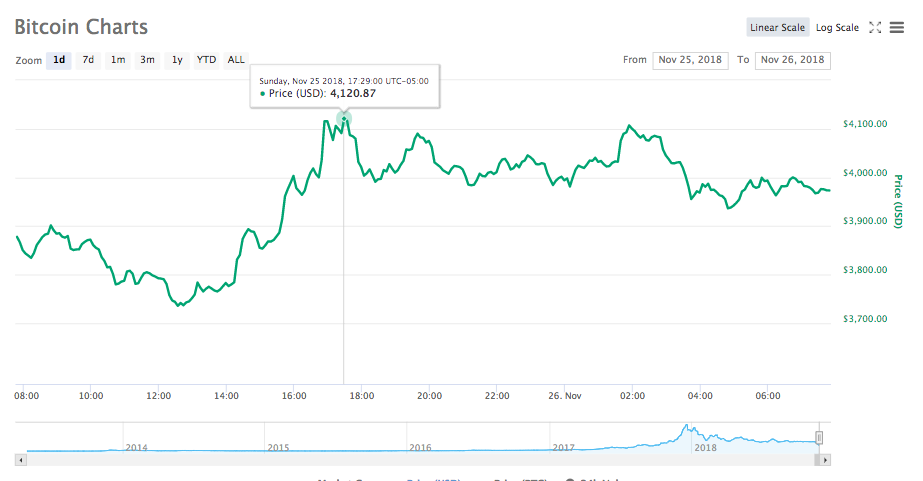 Ripple (XRP), the second cryptocurrency by market cap, is seeing more gains, up 6.7 percent over the 24 hour period and trading at $0.37 at press time. 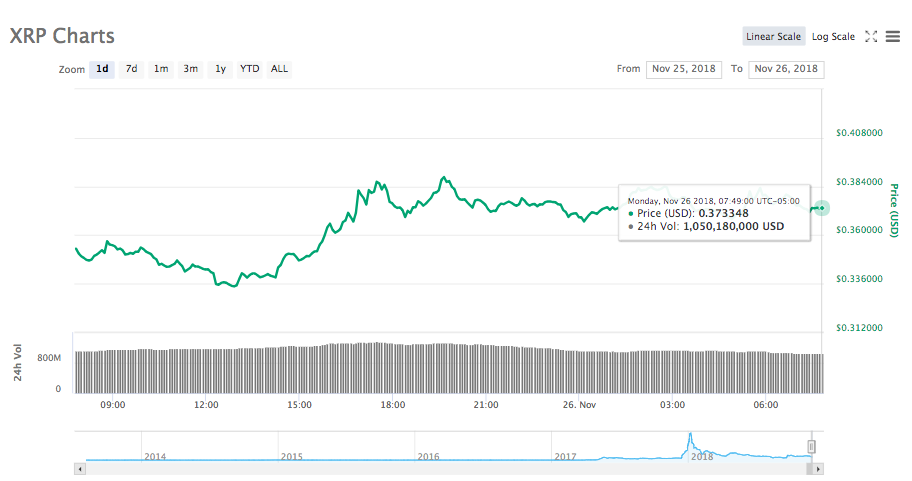 Bitcoin Cash, which some alleged has caused the recent collapse of the market by its recent hard fork, is seeing the biggest gains among the top 20 digital coins by market cap. The cryptocurrency is up almost 18 percent and is trading at $201, also having returned to its fourth position before EOS (EOS) in terms of market cap.

Yesterday, Bitcoin Cash went down to the top fifth coin position, with its price dropping to as low as $164. Bitcoin Cash is facing a drop of around 40 percent over the past 7 days, which is the biggest loss across the top 20 markets. 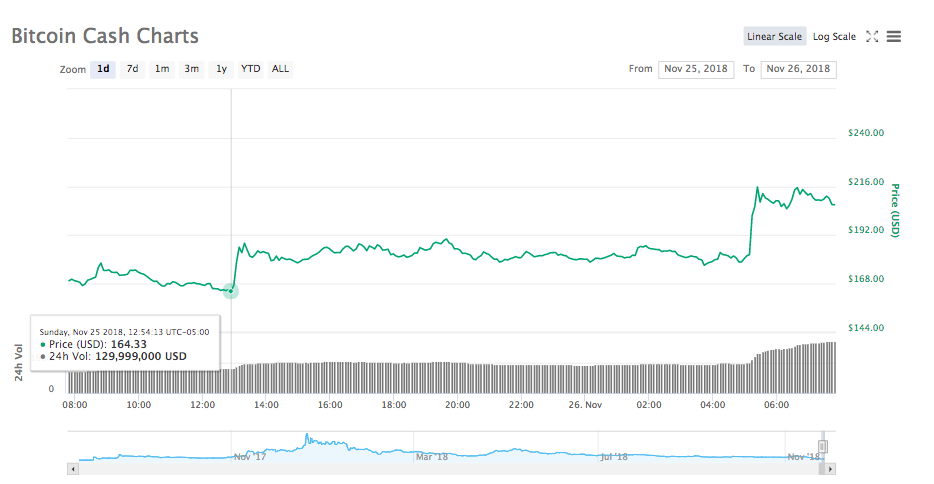 Total market capitalization is back to accounting for around $130 billion. At press time, total market cap amounts to $128 billion, with a daily trade volume of around $19 billion.

Recently, crypto investor and Bitcoin evangelist Alistair Milne tweeted a poll asking the crypto community to share their opinion about what Bitcoin’s bottom would be. 36 percent of respondents suggested that Bitcoin could drop to lower than the $1,800 threshold soon, while 26 percent predicted $3,000. 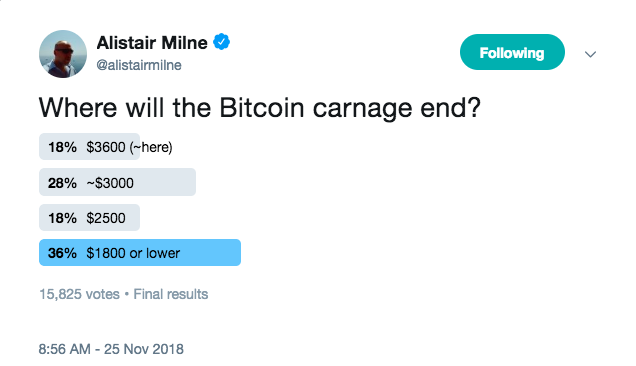