Bitcoin Hits Highest Price Point in Over a Year, Pushing Toward $9,000

7959 Total views
314 Total shares
Listen to article
0:00
News
Own this piece of history

Monday, May 27 —  following a mild correction yesterday, the crypto markets have seen strong positive momentum today, with bitcoin (BTC) soaring to its highest price point in over a year. Virtually all of the top 50 cryptocurrencies are seeing solid green, as Coin360 data shows. 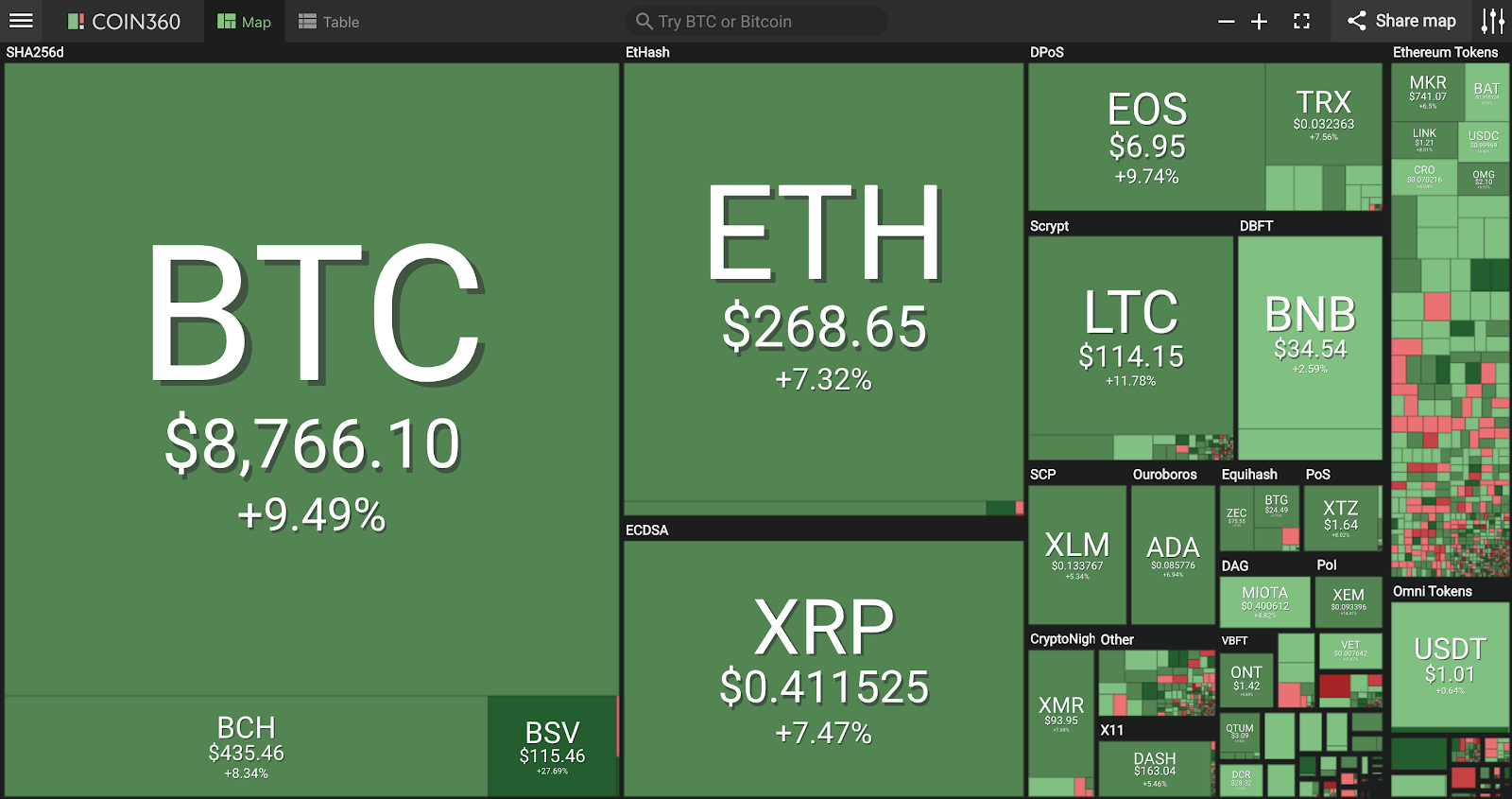 Bitcoin has reported over 9% in growth on the day and is trading at $8,727 by press time. Having briefly dipped below $8,000 yesterday, May 26, the top coin saw a sharp rally kick in towards the evening. Bitcoin has seen considerable volatility this week, posting an intra-week low of around $7,550 on May 23 before surging to today’s new price peak. 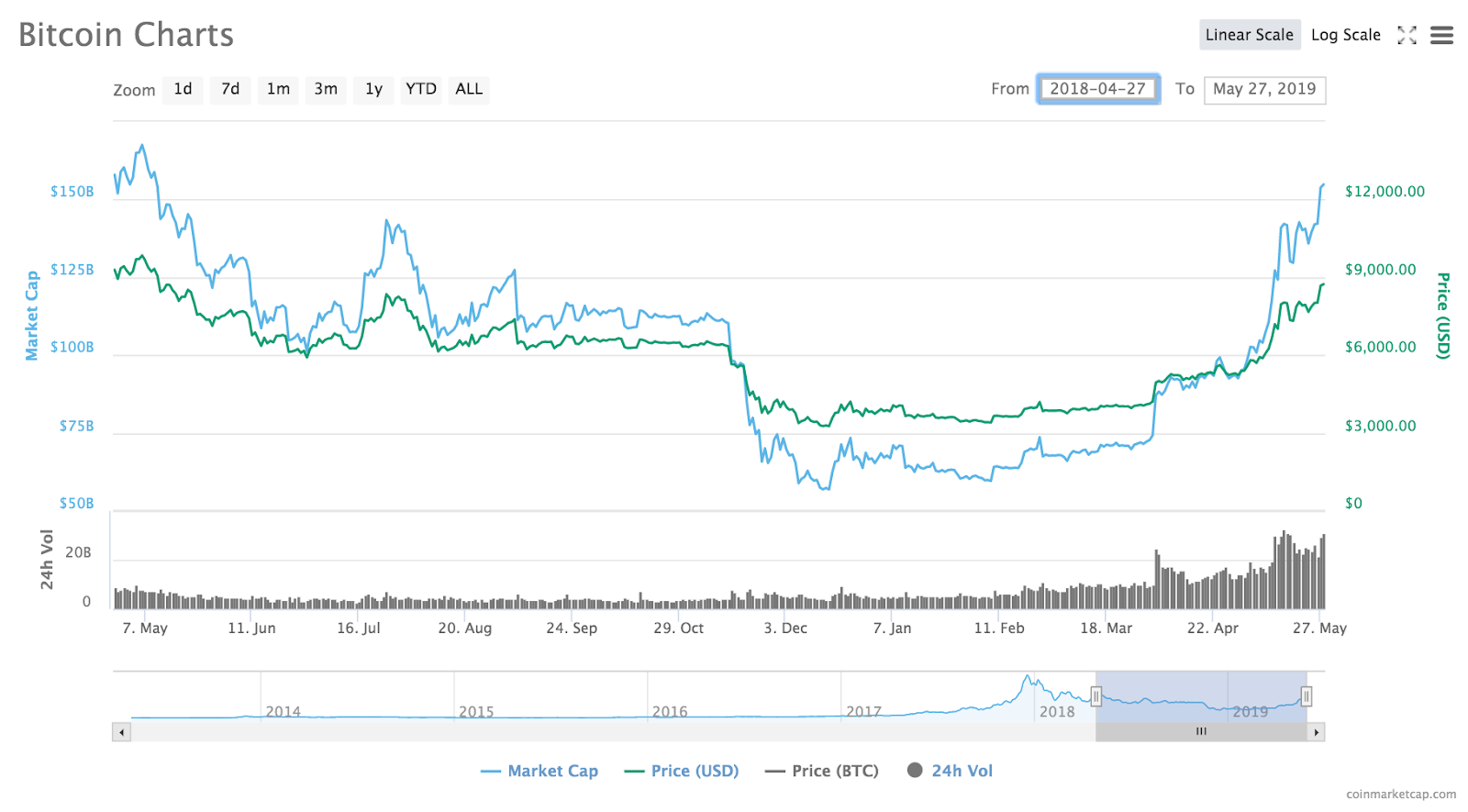 In his own technical analysis, trader Peter Brandt has cautioned that bitcoin’s surge ostensibly represents “the FOMO phase of the advance,” and that “once the majority of sold-out crypto bulls capitulate and chase this rally a more sizable correction will likely occur, stopping out the same bulls, who are chasing this advance.”

Largest altcoin by market cap ether (ETH) has also seen solid gains, growing 7.1% on the day to press time to trade at $267.50. Ether has seen strong correlation with bitcoin’s price surge, which kicked off during later trading hours yesterday. Today’s gains brings the altcoin back to its mid-month (May 18) earlier price peak, and in a longer view, to price levels last seen in early September 2018. 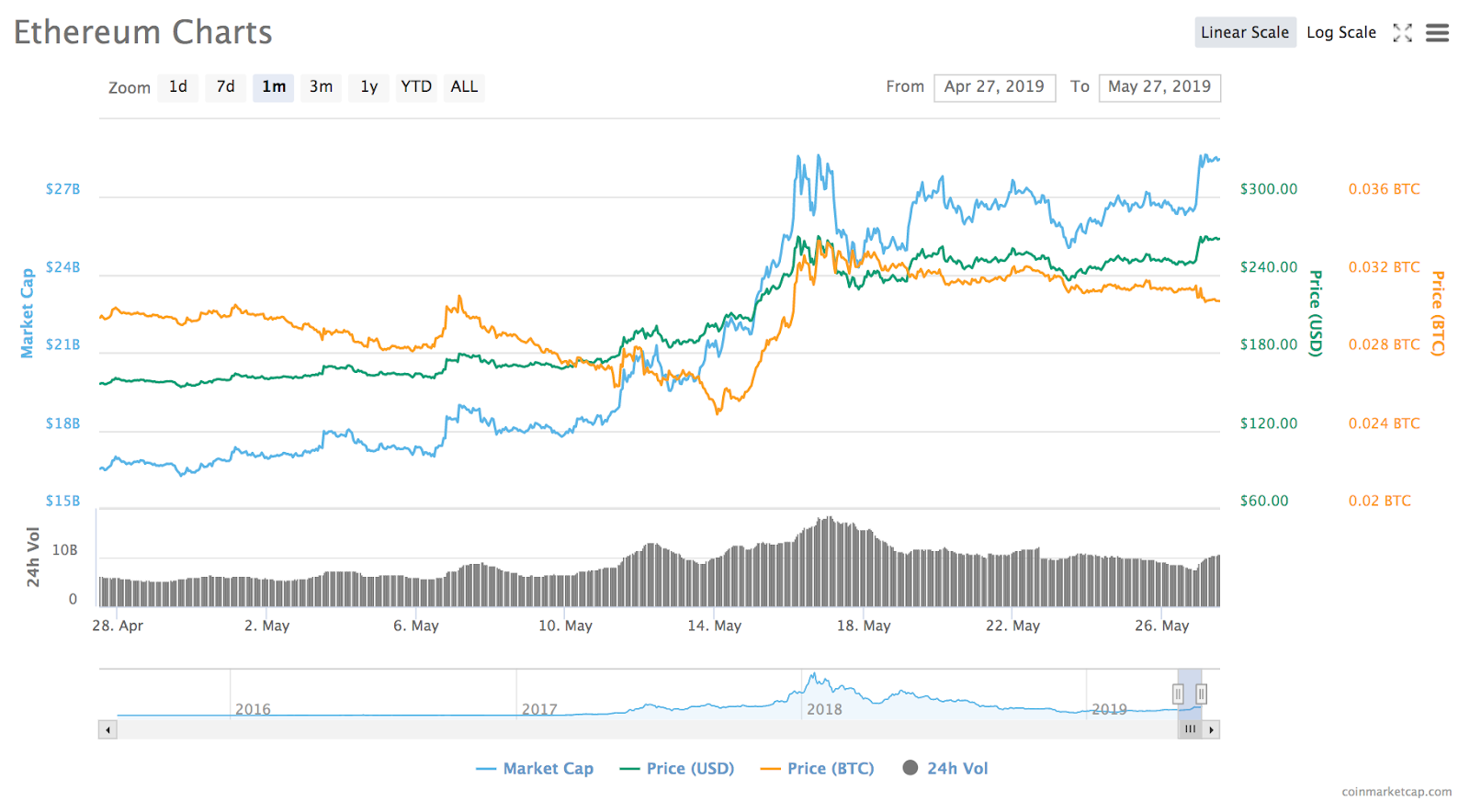 XRP has seen a 6.9% gain on the day to trade at $0.41 by press time. Yesterday’s renewed upturn has reversed all of the asset’s midweek losses, with XRP now sealing a 3.5% gain on the week. 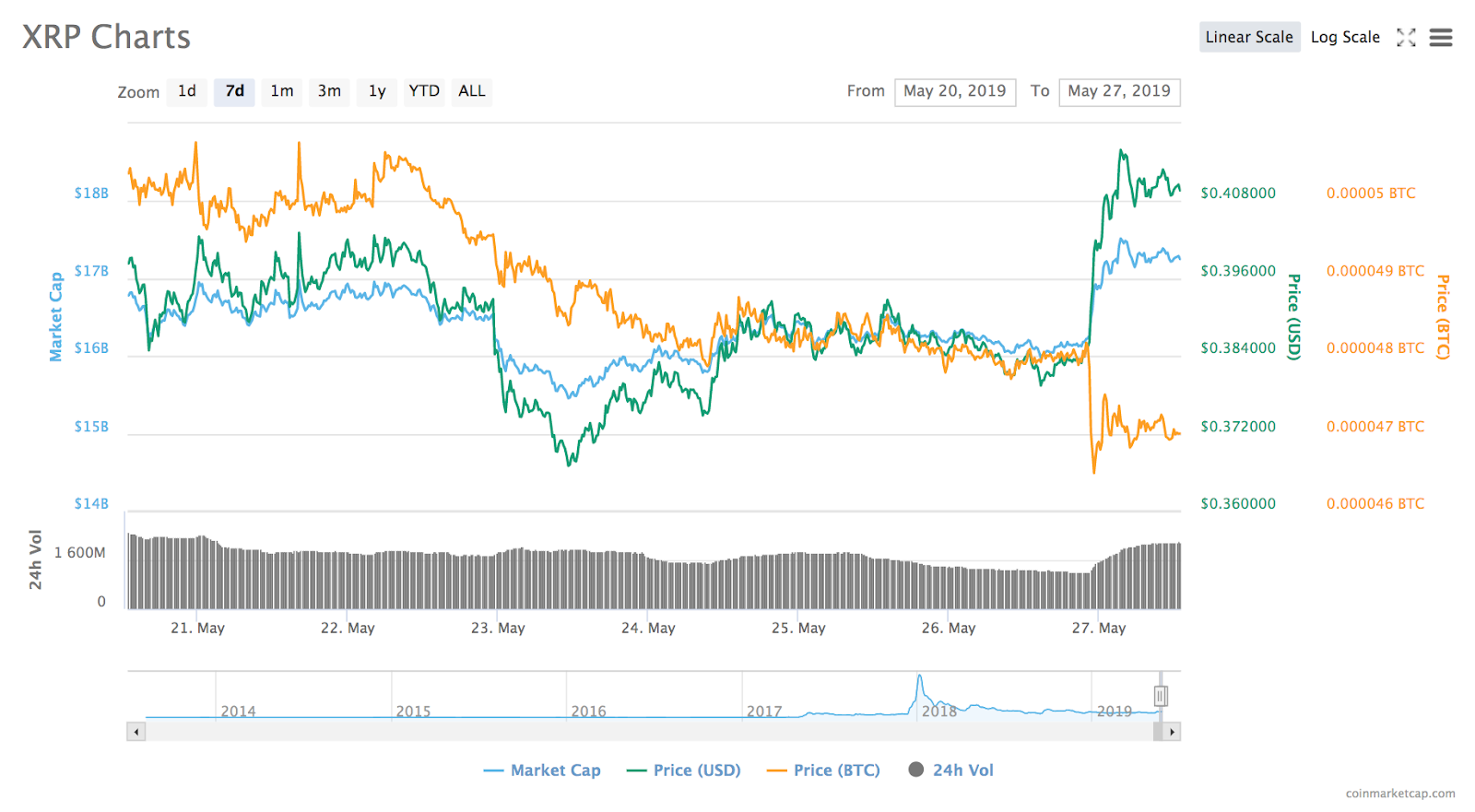 Among the top ten cryptocurrencies at press time, all are green. The market-wide price rally includes a 12.1% gain for fifth largest crypto litecoin (LTC), a 9.6% gain for sixth ranked coin eos (EOS) and an 8.2% gain for bitcoin cash (BCH), ranked fourth. Bitcoin cash’s gains come despite new reports of an apparent double spend that followed its mid-May hard fork, as Cointelegraph has reported.

Widening out to the top twenty, all coins are again unanimously green, with several posting double digit gains. These include bitcoin sv (BSV) — ranked 12th and soaring almost 25% on the day — an 11% gain for 19th largest coin nem (XEM) and an over 9% gain for tron (TRX), ranked 11th.

The total market capitalization of all cryptocurrencies is currently around $269.6 billion — back to levels last seen in early August 2018 — with bitcoin dominance at 57.3%.

As Bloomberg today reports, bitcoin’s rally over the past month is ostensibly its strongest since before its historic late 2017 price surge — with an almost 70% gain on the month.

The report cites eToro analyst Mati Greenspan, who commented on the rally:

“Easier to spend means a greater-use case and a greater level of adoption. The tipping point is likely very close now.”

In traditional markets, European stocks have steadied following the continent-wide elections, as Bloomberg reports today. As of press time, the Stoxx Europe 600 Index increased 0.2% and the euro has held steady on forex markets.