After seeing a small rebound yesterday, crypto markets are again in the red, Bitcoin trading around $3,400.

Thursday, Dec. 13: after seeing a small rebound yesterday, crypto markets are experiencing another mild decline, with 19 out of the top 20 cryptocurrencies by market cap in red. 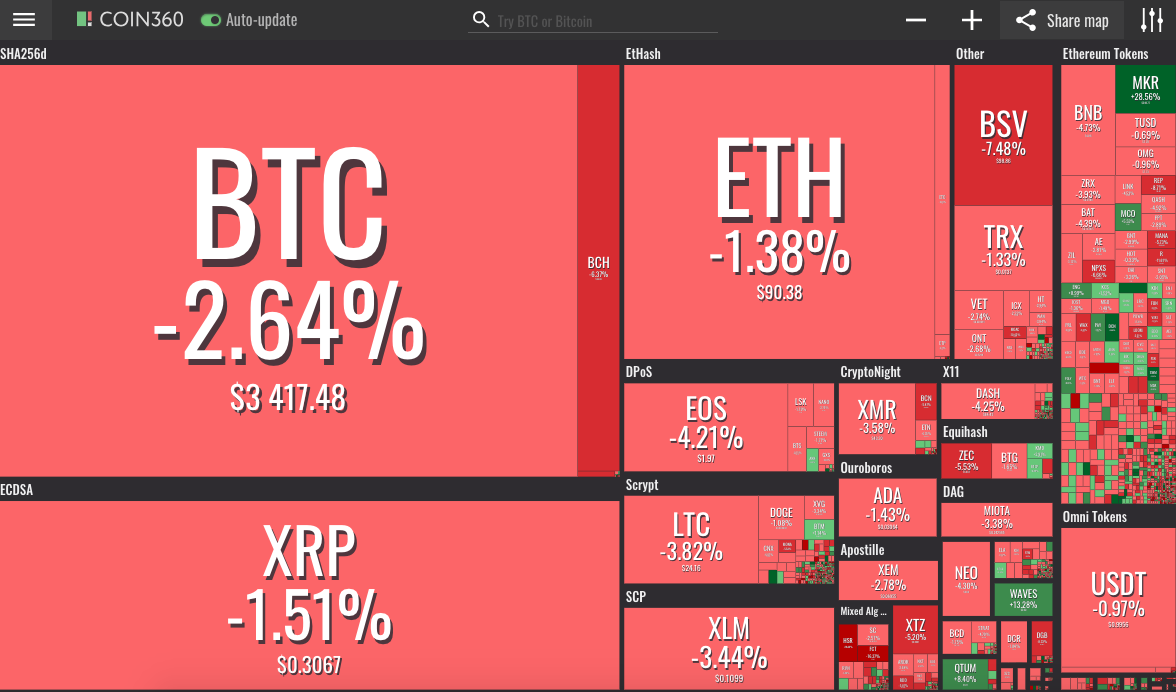 Ripple (XRP), the second largest cryptocurrency by market cap, is down 1.4 percent over the 24-hour period, and is trading around 0.30 at press time.

After growing to as high as $92 per coin yesterday, third largest coin Ethereum (ETH) has again dropped below the $90 price point today. At press time, the coin is trading around $90.30, down 1.3 percent over the past 24 hours to press time.

Recently, major Ethereum software client Go Ethereum (Geth) published new code that includes the activation time for the upcoming upgrade, or hard fork, of the Ethereum blockchain, Constantinople. The code update follows Ethereum developers’ recent decision to launch the hard fork at block 7,080,000, which is estimated to happen around Jan. 14, 2019.

Bitcoin SV (BSV), the coin recently formed in a hard fork of Bitcoin Cash (BCH), is again seeing the most losses among top 20 crypto markets. The coin is down over 8 percent over the past 24 hours and is trading at $82.96. Bitcoin Cash is close behind, down almost 8 percent and trading at $95.1.

While the 20 top currencies by market cap have experienced some mostly mild losses today, the major markets have also seen a new entrant into the top 20 ranks; cryptocurrency and governance token Maker (MKR) is up a whopping 33.8 percent on the day and has overtaken ZCash (ZEC) in terms of market cap, reaching 19th place.

Earlier today, the Cambridge Centre for Alternative Finance reported that the cryptocurrency industry has seen the entry of 17 million new “verified users” this year. According to the study, the amount of crypto users has increased by almost 50 percent, growing from 18 million to 35 million.

Yesterday, Dec. 12, Berlin-based fintech company SolarisBank announced partnership with major European stock exchange The Stuttgart Exchange (Boerse Stuttgart Group) in order to develop infrastructure for a cryptocurrency exchange. Founded in 1860, the Stuttgart Exchange is the second-largest exchange in Germany. In May this year, the exchange launched a zero-fee crypto trading app called Bison.

Recently, Mike Novogratz, founder of crypto bank Galaxy Digital, argued that Bitcoin is “not going to zero,” comparing the current state of crypto markets to a “methadone clinic.” Novogratz explained that last year’s “speculative mania” that lead Bitcoin’s to reach almost $20,000 per coin is gone and the crypto community is “more sober now.”