Crypto markets are seeing little momentum today, June 28, with price fluctuations of within a 2 percent range among all of the major cryptocurrencies.

Crypto markets are seeing little momentum today, June 28, as data from Coin360 shows, with price fluctuations of within a 2 percent range among all of the major cryptocurrencies. 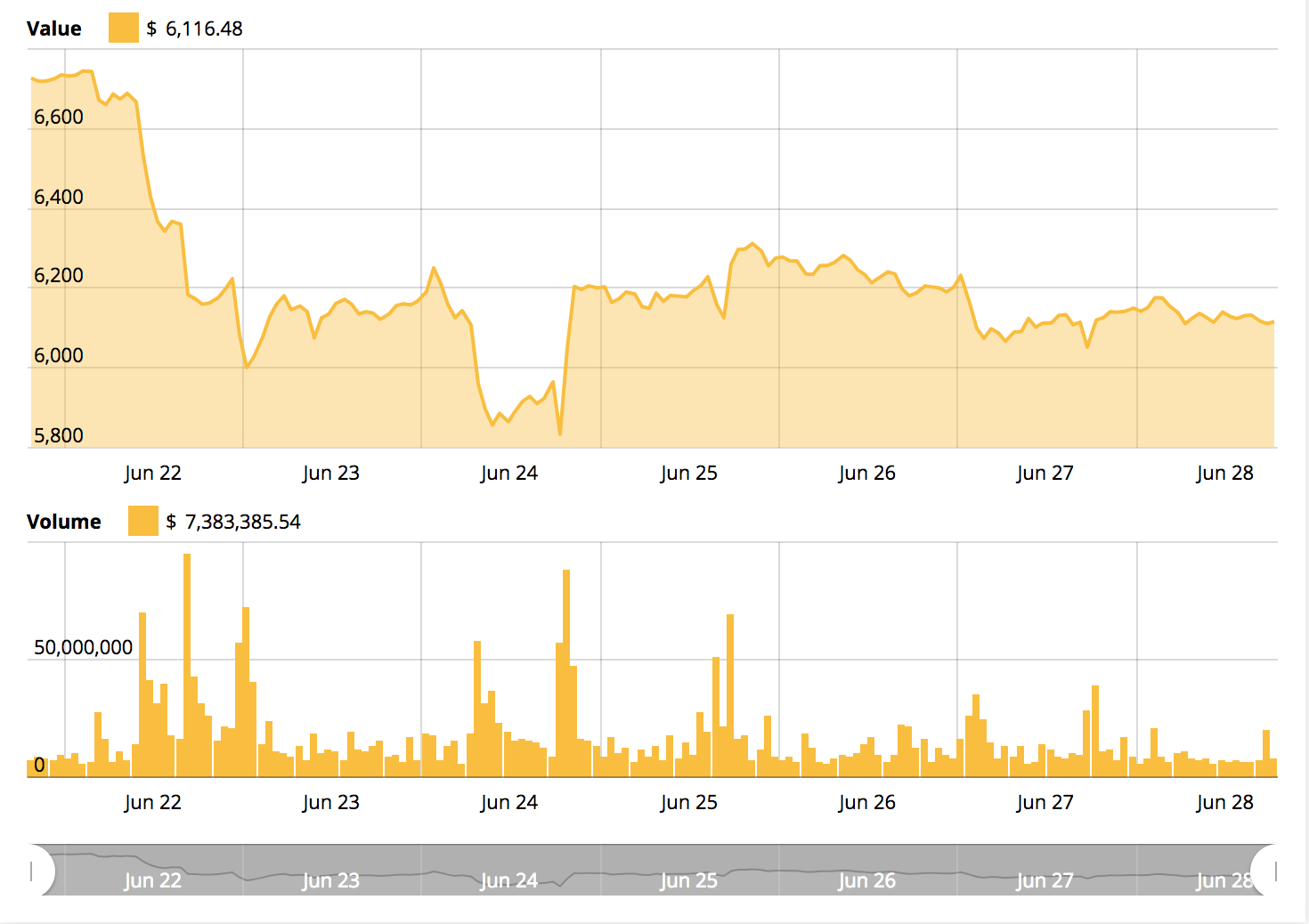 The leading cryptocurrency has since recovered and somewhat stemmed its losses, but some onlookers are concerned by Bitcoin’s technical performance in recent months.

Analyzing BTC’s 15-day moving average charts over different time spans, Fundstrat technician Robert Slyumer said yesterday he believes the short-term “critical stop level [is] at $5,800-6000… with a resistance level of $6,300-6400. If it can rally through that, I think there’s a chance Bitcoin could start to turn.”

The analyst conceded that “it’s going to be tough” to realize Fundstrat co-founder Tom Lee’s prediction that Bitcoin will reach $25,000 in 2018.

Top altcoin Ethereum (ETH) is trading around $436 to press time, up a little under one percent over the past 24 hours. It had still lost over 17 percent on the week, on par with its monthly performance, also currently around 17 percent in the negative. Among the top twenty cryptocurrencies listed on Coinmarketcap, anonymity-oriented altcoin Monero (XMR) is continuing its recovery from losses earlier this month, seeing a consistent several-day uptick and gaining around 3 and a half percent on the day.

Total market capitalization of all cryptocurrencies is at around $246 billion at press time, significantly down from its figure just shy of $287 billion a week ago.

In an exclusive interview with Cointelegraph today, Changpeng Zhao, the CEO and founder of Binance, appeared unfazed by falling crypto prices and trade volumes through 2018, noting that “markets always overreact,” both when things are going well, and when things cool off. Zhao said that he’s seen examples of the current bear trend “many times, five or six times on a yearly cycle.”

For its part, Binance is set to imminently launch a crypto-fiat exchange in Uganda, eyeing the wider African markets. The CEO considered that opening more fiat channels can help to promote more growth in the industry.

Today, hacked South Korean crypto exchange Bithumb lowered the estimated amount of money lost in its high-profile June 19 hack - from around $31 million to $17 million. Nonetheless, the news - which followed upon another security breach at a much more minor Korean exchange, Coinrail  - has loomed over the markets.

In the wake of its own history of record-breaking breaches, a regulatory crackdown on crypto exchanges in Japan continues.

New research published this week has however suggested that 86 percent of cryptocurrency firms’ executives and investors want the industry to self-regulate. An even higher figure - 89 percent - saw the need for “formalized” self-regulation, although a slightly smaller majority did concede these formalized standards should have oversight from authorities.