Enterprise Blockchain on the Rise Despite Criticisms

Enterprise blockchains to grow in popularity despite criticisms.

In the announcement for the launch of its blockchain security testing service, IBM X-Force Red highlighted the rise of enterprise blockchains and said that “organizations are seeing real efficiencies and cost savings from its use.”

This arrived on the back of a Forbes article in February that explored the reasons “Why 2019 May Become The Year Of Enterprise Blockchain,” which also highlighted Deloitte’s 2018 global blockchain survey that found 95 percent of companies across different industries were investing in blockchain tech projects.

All of that indicates a rosy outlook for blockchain growth. But some critics contend there’s no need for enterprise blockchains and question whether such investments are warranted. It’s that pushback that has placed many companies in a difficult position — fearful of falling behind competitors, but wary of investing in a technology that may not require proprietary solutions.

The dilemma is reflected in the mix of comments in the enterprise vs. public chain debate.

Sky Guo, CEO of Cypherium, a startup offering enterprise-ready blockchain solutions, said to Forbes that enterprises no longer question whether blockchain is worth the attention but that, on the contrary, they are now proactively seeking new ways of incorporating this technology in their legacy systems.

This is something Leanne Kemp, CEO and founder of Everledger, a global digital registry for diamonds powered by the IBM enterprise blockchain platform, would agree with. Kemp, who won the 2018 Advance Award for technology, indicated that the introduction of enterprise blockchain solutions has the potential to completely revolutionize traditional supply chains, not just for the diamond trade:

“Where we’re at in terms of the world for 2030 and 2050 and beyond, we have to rethink supply chains. We have to think about how do we re-imagine product in market. We started with diamonds but our vision is much grander than diamonds.”

The difference between enterprise and public blockchains

Enterprise (also called private) blockchains and public blockchains share a number of characteristics. Both consist of a distributed peer-to-peer network, where the network is governed and maintained through a consensus protocol. Both types also provide some level of immutability of the network to prevent malicious attempts by individual participants to manipulate the data stored on the blockchain

That is as far as the commonalities go, and there are a number of key differences.

The disadvantages of public blockchains are the fact that they can take an enormous amount of computational power to reach consensus on the network, especially proof-of-work (POW) blockchains, and there is little or zero privacy for transactions.

This process of permission puts a restriction on who is allowed to join the network and in what capacity they are allowed to participate.

The permission process will also vary from network to network. A regulator within the network could issue licenses for participation, it could be in the form of a consortium that makes the decision, or the current network participants could come to an agreement on future participants.

Enterprise blockchains are less anonymous, which helps with compliance such as Know Your Customer (KYC) regulations, and transaction visibility is contained within the network, which provides a level of privacy and security. It is also cheaper, as the network wouldn’t require the vast amounts of processing power of public blockchains and nodes don’t necessarily have to be paid to verify transactions. Consensus tends to be faster, as there are far fewer nodes on a network that has to come to a majority consensus, which also provides for better scalability. These are important factors for large corporations.

The number one drawback to private blockchains is that they tend to be more centralized, as there are often significantly fewer network participants than on public blockchains. This increases the risk of manipulation by a small group, or even a single malicious actor.

As a result, a number of criticisms have been levied against private blockchains. 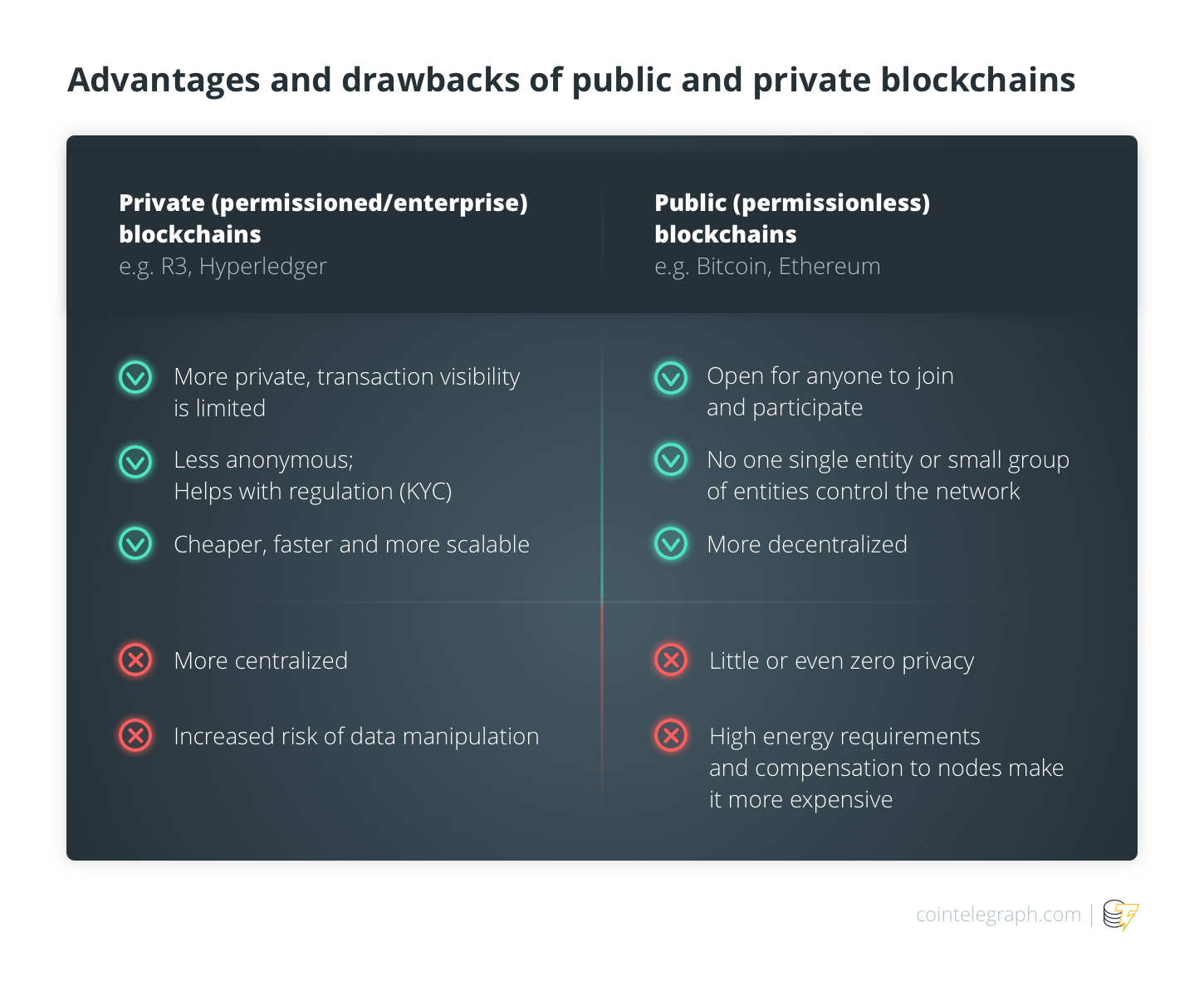 Not everyone is a fan of enterprise blockchains

An article published by international consulting firm McKinsey & Company in January 2019 took a very cynical view on blockchain’s influence, stating that the technology has yet to become the game-changer some expected, and the bottom line is that, despite billions of dollars of investment — and nearly as many headlines — evidence for a practical, scalable use for blockchain is thin on the ground.

Jimmy Song, a Bitcoin developer and venture partner Blockchain Capital, said in an interview that private, centralized systems, such as an enterprise blockchains, “makes zero sense,” while Bill Barhydt, CEO of cryptocurrency wallet and investing app Abra, called enterprise blockchains “nonsense” during an episode of Fortune’s “Balancing The Ledger”:

“Just like people realized extranet was a waste of time, it was all about the Internet.”

Research firm Gartner held their annual Symposium event in February, and the message from them was also overwhelming to stay away from blockchain for the time being.

Gartner research fellow David Furlonger said, “It's still not appropriate for the vast majority of enterprises to consider blockchain technology at its current level of maturity,” despite “blockchain” being the top search term on Gartner.com since January 2017.

The firm stated that blockchain still has a number of challenges that have to be overcome before enterprises can confidently implement it at scale.

Adrian Leow, research director at Gartner, also said that the majority of blockchain proof-of-concepts were based on Ethereum — followed by HyperLedger and Corda — but that businesses could expect that, within just a couple of years, another platform would replace them. He likened it to Nokia and Blackberry, which were the initial leaders in the mobile phone market, before Apple and Samsung pushed them out.

"Probably the dominant blockchain platform of the future doesn't exist yet," Leow said.

Furlonger added that, for an outcome on the debate of public versus public blockchains, it all depends on who you listen to on a given day:

"I often feel I'm in the middle of this maelstrom of hyperbole and general commentary in the market. Virtually every day there's someone saying something positive or negative about blockchain."