Crypto market news service Coinness claims that TRON is about to partner with China’s Internet giant Baidu, citing private correspondence with the former.

Neither TRON nor Baidu have been able to confirm the partnership to Cointelegraph as of press time.

Without specifying the details of the partnership, Coinness has claimed that the deal between TRON and China’s Internet giant Baidu will be “officially” revealed by the cloud storage service Baidu Cloud “next week.”

While Coinness claims that TRON has exclusively confirmed the partnership in private correspondence with it, the crypto platform itself has not yet officially announced any details of the partnership or even the identity of its new business partner.

TRON’s CEO Justin Sun has recently hinted on Twitter at a secret partnership with an unnamed “industry giant” that is valued at “tens of billions of dollars.” In his Tweet, posted Friday, Oct. 12, Sun has similarly provided little information:

As mentioned on TRON’s website, the decentralized Internet company TRON Foundation was established in Singapore in July 2017, while TRON’s open source protocol was launched in December 2017. The company has dual headquarters in Beijing and San Francisco, and a team of over 100 employees working all over the globe, with some of them being formerly employed by China’s Internet giants such as Alibaba, Tencent and Baidu.

In late September, TRON released details about its partnership with a popular torrent client BitTorrent, following the earlier acquisition of the company. A collaboration between the two companies dubbed “Project Atlas” will reportedly enable the users of the BitTorrent client to receive rewards in TRON for seeding torrent files.

Earlier in August, Baidu has joined Tencent and Alibaba in enforcing new anti-crypto policies in line with China’s overall toughened stance on the industry. The firm has shut down at least two popular crypto-related forums, with a notice to their users stating that Baidu’s measures are compliant with the “relevant laws, regulations and policies.”

On Sept. 26, Baidu has released its Baidu Blockchain White Paper V1.0, aiming to create “the independent development of the ‘Super Chain’ network system.”

TRON is currently the eleventh largest cryptocurrency by market cap, according to CoinMarketCap data. On June 25, TRON celebrated its “Independence Day,” when it migrated off the Ethereum (ETH) blockchain to its own independent public blockchain. 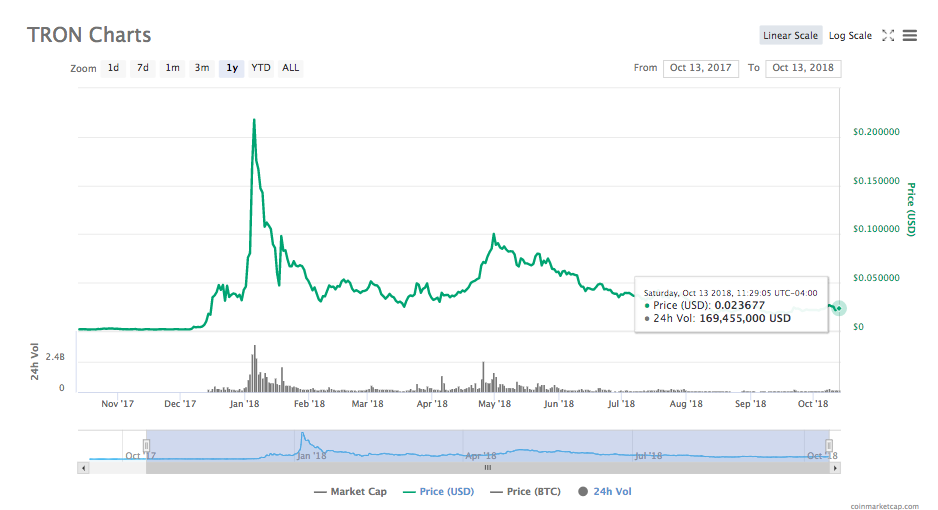