Bitcoin volatility hits all-time low, which could lead Bitcoin to initiate a major rally and bottom out at $6,000

In the beginning of October, Bitcoin achieved a 17-month low volatility rate, recording its highest level of stability since mid-2017. 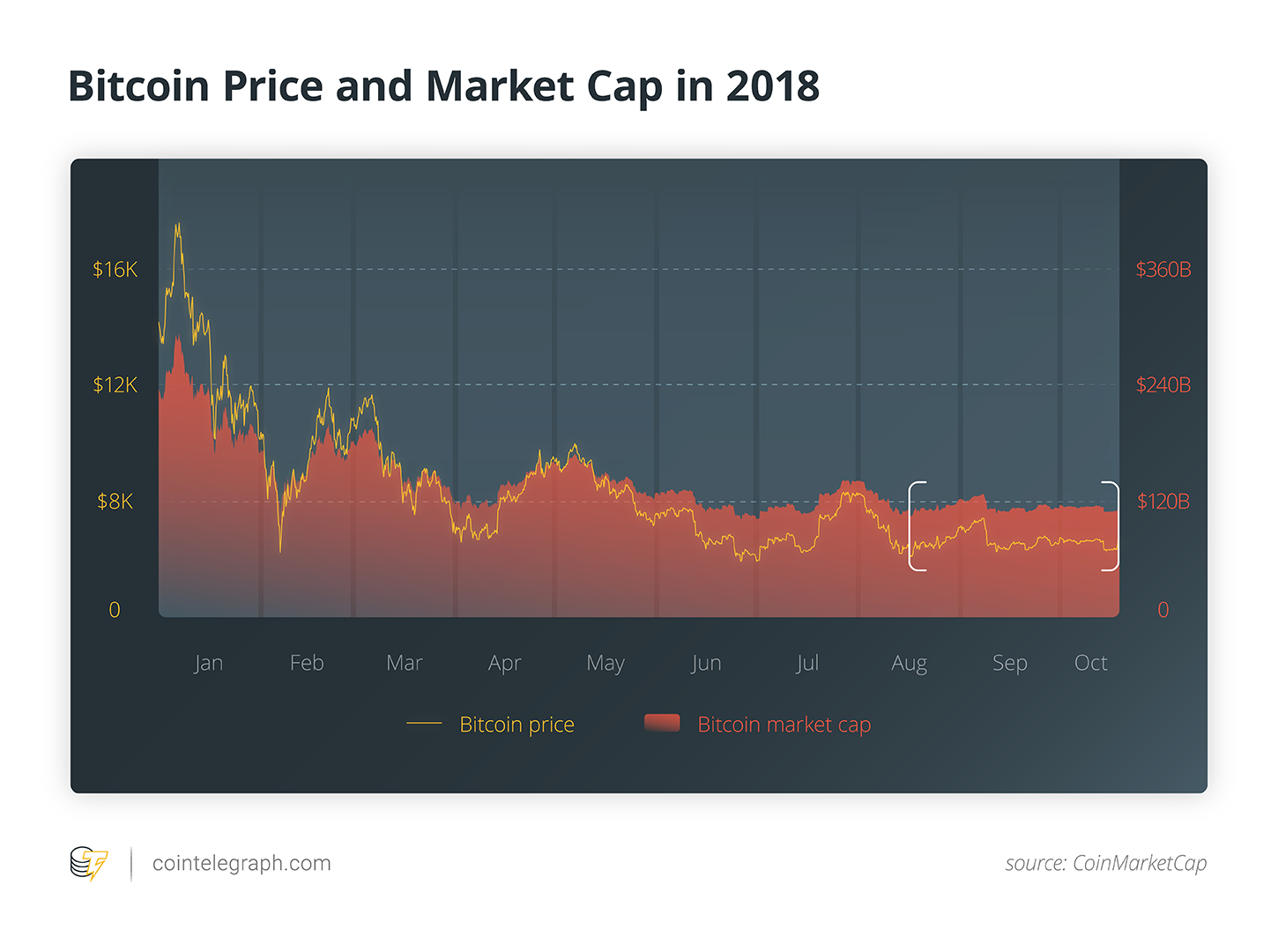 Bitcoin has started to experience a noticeable decline in its volatility during a period in which the volume of the dominant cryptocurrency achieved a new yearly low. Thus, the volume of Bitcoin dropped from $4.2 billion to $3.2 billion on October 7, by more than 23 percent. Since then, the volume of BTC has recovered substantially, back to $4.2 billion, but it still remains substantially lower than previous weeks. The overall decline in trading activity in the cryptocurrency exchange market due to the uncertainty in the short-term price trend of Bitcoin is said to have contributed to the significant drop in its rate of volatility.

Mike McGlone, a commodity strategist, stated that as the cryptocurrency market matures, the rate of Bitcoin volatility will continue to rapidly decline. He explained that an emerging asset class often sees a large discrepancy in its daily price movements and volatility in volume until it finds strong infrastructure to support and solidify its market.

"This is a maturing market, so volatility should continue to decline. When you have a new market, it will be highly volatile until it establishes itself. There are more participants, more derivatives, more ways of trading, hedging, and arbitraging.”

Since August 9, the price of Bitcoin has remained relatively stable in the range between $6,400 and $6,800. Apart from one occasion in mid-September during which BTC surpassed the $7,000 mark, the asset has shown no signs of solid momentum, mostly due to the lack of volume in the cryptocurrency exchange market.

On October 6, the cryptocurrency exchange market recorded its lowest daily volume in over 12 months, leading traders to be concerned regarding the short-term trend of the market.

Historical lows in volatility: their impact on the crypto market

As seen in the volatility chart of Bitcoin, dating back to 2012, provided by Woobull, a cryptocurrency market data platform operated by technical analyst Willy Woo, Bitcoin achieved one of its lowest volatility rates in October 2013. 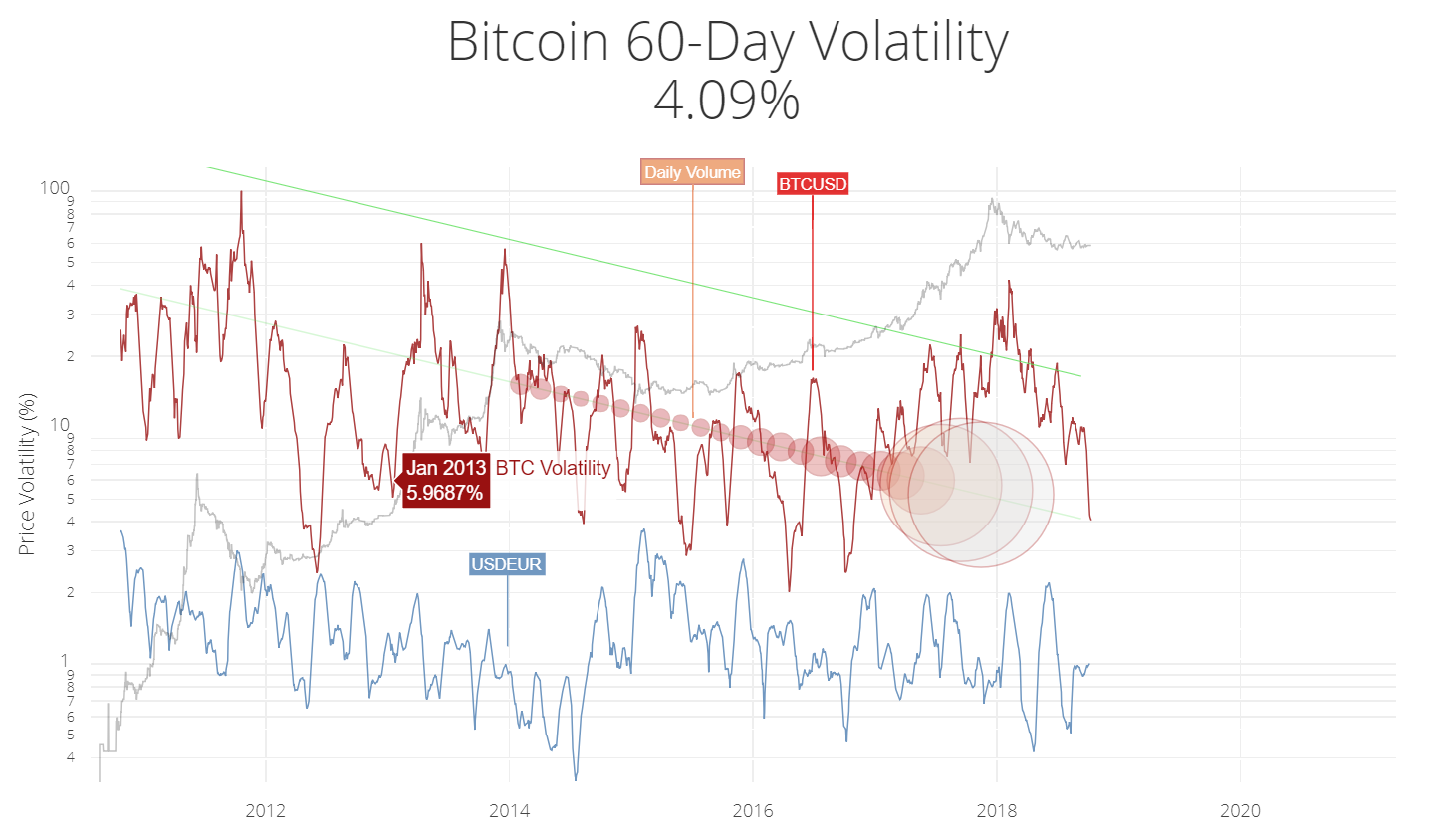 Subsequent to demonstrating a few months of stability, by the end of 2013, the price of BTC increased from around $30 to $1,000, by more than 30-fold within a two-month period. The stability of BTC allowed investors in the market to initiate an accumulation phase in a low price range, enabling more investors to enter the market and acquire BTC.

As prominent venture capital investor Garry Tan, who invested in Coinbase and a group of startups, worth more than $20 billion collectively, said, a low price range helps investors enter a new market or an asset class with significantly less risk:

“The crypto winter generally makes it safer for super-long-term oriented Yale-model institutions to enter at a price that isn’t dangerous. You know what is scary? Investing and then immediately seeing an 80% drop. That is hard to recover from.”

Bitcoin is unlikely to experience a surge in its price in the magnitude of its previous rallies including the 30-fold growth it achieved in 2013. But, in the long-term, stability could allow BTC to establish legs and build stronger support levels in its low price range, increasing the probability of both short-term and mid-term rallies. 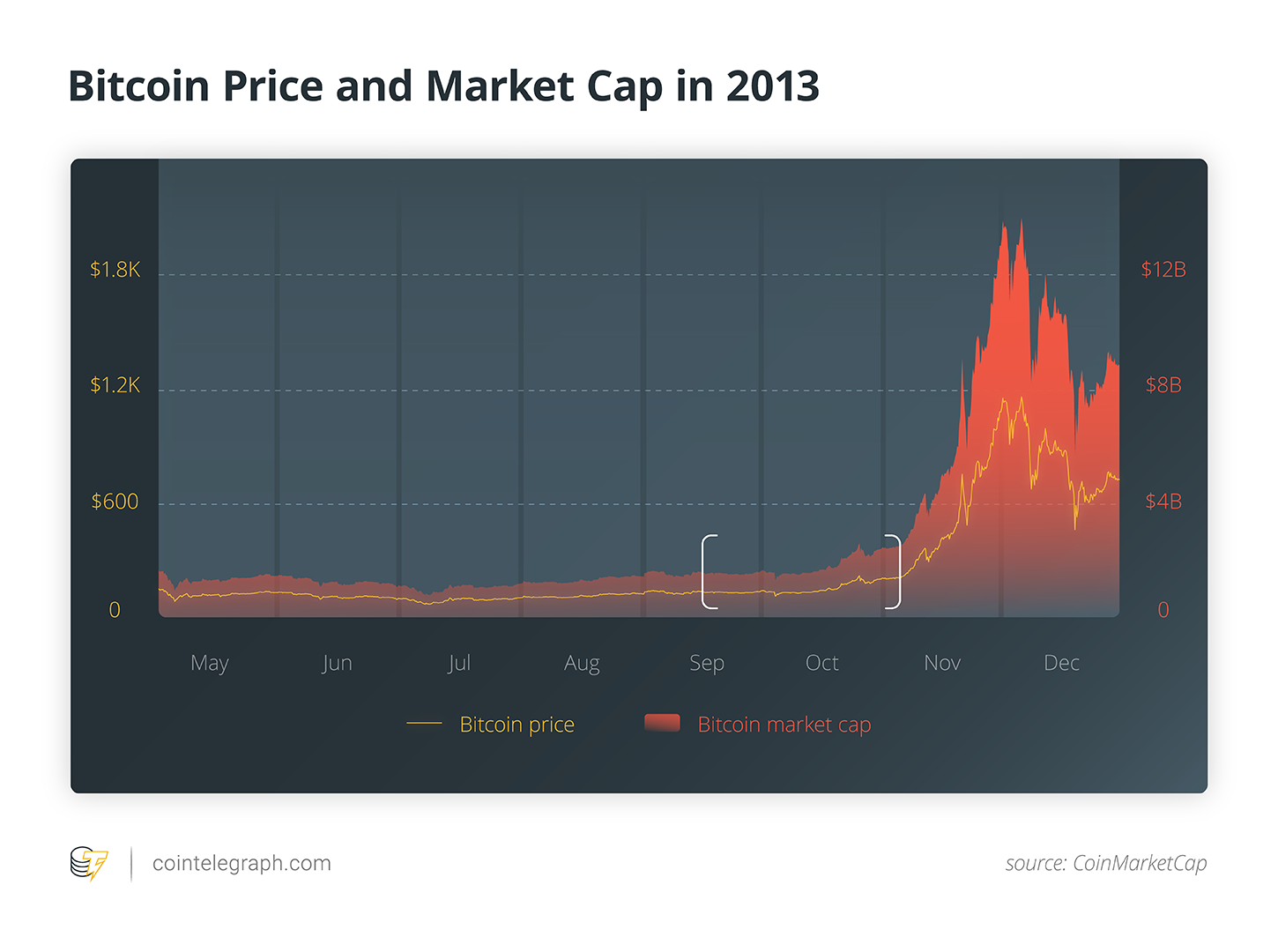 Why the Bitcoin market is not reacting to positive developments

Currently, the cryptocurrency market is not reacting to many of the positive developments that have emerged in the sector over the past few months.

In a period of three months, NYSE, Microsoft, and Starbucks have announced the launch of regulated cryptocurrency brokerage Bakkt, to better institutionalize the cryptocurrency market. Coinbase and BitGo received the approval of regulators to operate as trusted custodians to service institutional investors. Citigroup and Goldman Sachs have announced their plans of establishing crypto-focused custodian solutions in the short-term.

It is entirely possible, upon the recovery of Bitcoin’s volume and trading activity in the cryptocurrency exchange market, that the market will begin to respond to most of the progress that has been made in the sector over the last three months.

Stability of Bitcoin and what it means for the market 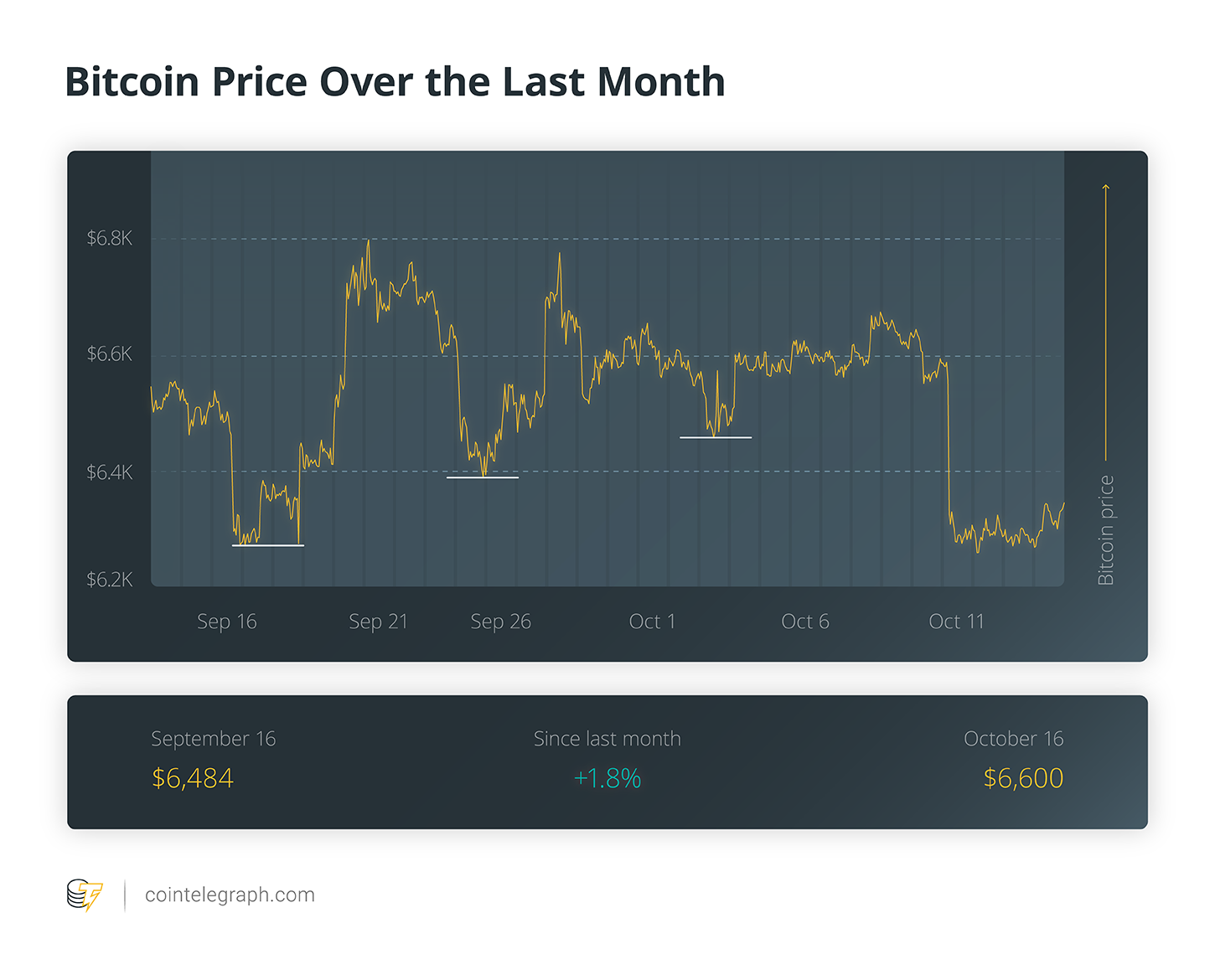 “Any extended period of consolidation or ranging is usually the run up to a fairly strong move. That said, opinion is mixed on whether that move is up or down. When you're analyzing charts, generally higher highs and higher lows are the indicators of a positive move up. Lower highs are probably not the best thing to pin hopes to in expectation of a rally. However, this is Bitcoin so [it is unpredictable].”

“Unless already comfortably in profit, a drop in volume is never something one wants to see when in a position. The overall sentiment attached to crypto probably isn't the most positive. Bitcoin effectively nose diving since last years all-time high has created a steady wave of retail interest decline across all crypto markets.”

Unprecedented stability since August: $6,800 is a major resistance level

Billionaire investor Mike Novogratz has emphasized $6,800 as a major resistance level for Bitcoin throughout the past month, and if BTC comfortably surpasses that level, then it will be able to eye resistance levels in the $7,000 and $8,000 region.

If Bitcoin breaks out of the $6,800 mark relatively quickly, Novogratz said it is possible for BTC to demonstrate a 30 percent increase in price by the end of the year.

“Thirty percent – there’s some key levels. You’ve got to take out $6,800 and if that breaks, you’ll go up to $8,800, $9,000 and if that breaks, it’s $10,000. Those kind of numbers make sense to me by the end of the year. You’re not going to see the massive run until the institutions actually start buying a lot. And the architecture is being put in place now. It’s going to be announced in the next few months. But then it’ll take a little bit of time to go through investment committees and whatnot.”

The issue is that since August 9, Bitcoin has consistently tried to break out of the $6,800 resistance level and failed in most of its attempts. It recovered beyond $7,000 on September 4, but it struggled to sustain its momentum and fell back down to the mid-$6,000 region.

Les explained that it is more likely for Bitcoin to experience a shakeout prior to a major rally on the upside. BTC has to experience a promising increase in its volume and price to ensure that 2019 begins with a positive sentiment:

“I suspect that there will be more blood before any kind of serious rally up. Volume and price, certainly in Bitcoin's case need to pick up before we get to near Christmas, otherwise we will see the year out with a very negative sentiment attached.”

Is it the right time to start accumulating Bitcoin?

In late August, when the price of BTC was still at around $6,600, ShapeShift CEO Erik Voorhees stated that the bear market is not over yet but it is a viable period for new investors in the space to start accumulating Bitcoin.

Voorhees stated the rate of collapse of the crypto market has slowed down considerably and it is highly unlikely for BTC to decline far below its current price range.

BTC has dipped below the $6,000 mark on three occasions throughout the past nine months. BTC recovered relatively quickly from the $5,900 region, leaving a short window for investors to acquire the dominant cryptocurrency at a price below the $6,000 level.

Given the strong support level of Bitcoin at $6,000 and many of the positive developments the sector has seen, Voorhees stated that it is an appropriate time to start accumulating BTC.

According to Les many platforms and companies in the cryptocurrency sector are continuously working on building the infrastructure that is necessary to support the next wave of users, investors, and consumers:

“Many platforms are ignoring talk of token prices and are just quietly working in the background to fulfil their roadmap objectives. In 2019, I think will be a very interesting year for us all. Mainstream adoption of the technology will start to become apparent and investment methods into the market will become much more in line with traditional markets. The future is very bright, however there has to be a bit of darkness beforehand.”

TD Ameritrade, the fifth largest brokerage in the US, stated that it sees sufficient demand from investors in both the crypto and financial sector to be comfortable with its investment in the cryptocurrency sector.

Why bulls are more likely to win over bears in 2018

Technical indicators, such as Williams’ Percent Range of Bitcoin, show that it is more bear-biased as of October 2018. However, as Don Alt, a cryptocurrency trader supposed, bulls have leverage over the bears which are currently dealing with a market with low volume and activity.

The next big move will be so incredibly obvious in hindsight.

The market has also demonstrated intense seller fatigue throughout September and October, making it unlikely for a large downside movement to occur in the weeks to come. It is possible for BTC to be stagnant in a low price range but the probability of the dominant cryptocurrency dipping below the $6,000 support level is low.

Thus, a final shakeout could be in play prior to a major mid-term rally. Generally, most analysts agree that the low rate of volatility Bitcoin has shown throughout the past three months, and particularly in October, will help fuel the next mid-term rally of BTC.