Experts argue on the possibility of the valuation of the crypto market reaching $200 trillion in the long-term.

42679 Total views
502 Total shares
Listen to article
0:00
Analysis
Own this piece of history

Last week, statements from Binance CEO Changpeng Zhao (aka CZ) and Ethereum co-creator Vitalik Buterin led the community to speculate on the possibility of the crypto market achieving a 1,000 return in value in the long-term.

On Sept. 8, Buterin stated with the awareness of cryptocurrencies by the general public and mainstream reaching a peak in late 2017, it is unrealistic for the valuation of the crypto market to increase by a thousand fold from its current value at $200 billion.

A thousand fold increase from $200 billion is $200 trillion, which is 70 percent of global wealth that includes gold, reserve currencies, and other traditional assets that are utilized as wealth management products.

“The blockchain space is getting to the point where there’s a ceiling in sight. If you talk to the average educated person at this point, they probably have heard of blockchain at least once. There isn’t an opportunity for yet another 1,000-times growth in anything in the space anymore.”

Given the context and Buterin’s statement on the growth of awareness of crypto, the claim of the Ethereum co-creator was quite straightforward. While it is possible that decentralized systems and applications (DApps) achieve a thousandfold growth in activity and user base, it is not realistic to expect the valuation of cryptocurrencies to surpass $200 trillion anytime soon.

As an increasing number of people began to question Buterin’s motive in his rather simple statement, he released a follow-up explanation on social media, reaffirming that, although he struggles to see the valuation of the crypto market achieving $200 trillion, exponential growth in the usage of DApps and blockchain protocols is possible.

“To be clear, I never said that there is ‘no room for growth’ in the crypto ecosystem. I said there is no room for 1000x price increases. A 1000x price increase from today means $200 trillion in crypto, or an entire 70 percent of today's global wealth being in crypto. What I actually said is that, because large portions of the population have already heard of crypto, further growth of crypto in any sense must come from depth (i.e., actual usage) and not bringing in more attention.”

The viewpoint of Buterin toward the long-term growth of the cryptocurrency market is sensible, as it would undoubtedly be difficult for cryptocurrencies to represent the vast majority of the world’s wealth. It would require banks operating the $30 trillion offshore banking industry and investors holding wealth in traditional stores of value such as gold to switch to cryptocurrencies as the primary store of value.

Instead of expecting an unrealistic return, Buterin noted that it is important to focus on the growth of DApps and protocols to speed up the process of increasing the usage of blockchain-based systems and cryptocurrencies.

Changpeng Zhao, the CEO of the world’s largest cryptocurrency exchange, Binance, better known to the community as CZ, stated that a thousandfold return from the current valuation of the market is “absolutely” possible, offering an extremely optimistic prediction on the future price trend of the market.

“I still disagree with this. I will say ‘crypto will absolutely grow 1000x and more!’ Just reaching USD market cap will give it close to 1000x, (that's just one currency with severely restricted use case), and the derivatives market is so much bigger.

“You also can't use traditional market size to measure potential for new technologies or industries. If you used (and people have) taxi market size to estimate Uber's potential, you would be off by quite a bit.”

There is merit in CZ’s argument that the potential of cryptocurrencies cannot be measured based on the market size of the traditional finance market. But, over the past year, the biggest companies in crypto, such as Coinbase, Gemini and BitGo, have been working to establish custody solutions to bring in institutional investors into the space, while investors have been highly anticipating the debut of exchange-traded funds (ETFs) and all sorts of publicly tradable instruments around crypto.

Hence, with the majority of investors in the crypto market anticipating an influx of investors from the traditional finance sector, to some extent, investors have to explore the finance market to measure the potential market size of crypto.

Moreover, as ShapeShift CEO Erik Voorhees said, global finance is becoming further integrated with crypto finance, and as the cryptocurrency sector continues to create bridges connecting the two markets, both markets will continue to intertwine and affect one another, positive or negatively.

As CZ stated, it is also important to acknowledge that money is one application of blockchain technology that is best demonstrated by Bitcoin. Venture capital firms and prominent investors like Ben Horowitz generally consider blockchain technology and smart contract blockchain protocols like Ethereum as new global computing systems.

Bitcoin, Ether and other major cryptocurrencies that have started to be adopted as stores of value have alternative use cases. Ether operates as gas that fuels the Ethereum smart contract blockchain protocol, which — with sufficient scaling through the implementation of sharding and Plasma — could compete against centralized web servers and computing platforms in the long term.

The ability of blockchain technology to operate as a computing system on top of a form of money could add more value and, as CZ said, in the sense that blockchain technology is not limited to money, it can be argued that the comparison between crypto and the finance sector represents only one aspect of the market.

Garry Tan, a prominent venture capitalist and the earliest investor in Coinbase and Instacart, who has funded more than 100 startups worth $20 billion, said that it is possible for the crypto market to reach hundreds of trillions of dollars in market valuation.

While a thousandfold return is difficult to imagine, Tan stated that the possibility of explosive growth in the cryptocurrency sector cannot be ruled out. He emphasized that the crypto market will not undergo the trend most speculators in the industry expect. Tan told Cointelegraph:

“My general sense is that it is possible but unlikely to be 1000x. Even if it did get there, you would be assuming securitization using security tokens, which isn’t exactly what speculators have in mind when they are hoping for more 1000x situations. They are generally thinking that their worthless altcoins will somehow be worth 1000x and security tokens will merely represent ownership in real assets. It’s a strange nuance but one worth mentioning.”

Still, after nine years, Tan stated that the cryptocurrency market is mostly dominated by retail investors and individual traders. A significant amount of capital is controlled by institutions and the entrance of institutional investors — like pensions, endowments and sovereign wealth funds — could very well lead to an explosive increase in the valuation of crypto.

For institutional investors to commit to an asset, say Bitcoin, a specific type of infrastructure is required to facilitate the transfer of funds. Custody solutions in the crypto market have not existed for more than two months, with the first trusted custodian solution released by Coinbase in July.

Hence, it could take months to years for institutional investors to commit to the crypto market. But, echoing the viewpoint of billionaire investor Mike Novogratz, Tan stated that once institutions find their way into crypto, the market will see a difference in terms of volume and value, as Novogratz previously said:

“I think if you start seeing institutional LPs [limited partnerships] — like endowments, foundations, pension plans and sovereign wealth funds put capital into cryptocurrencies — you will see a tipping point where a percentage of world wealth starts flowing in. We are at the very earliest stages of that. Novogratz talks about the hordes coming, and I think that is correct. Crypto is still extremely driven by retail investors, but it’s staggering how much money is locked up in institutions.”

As seen in the graph below, the volume of the crypto market experienced a large spike in late 2017, as the prices of cryptocurrencies peaked at all-time highs. 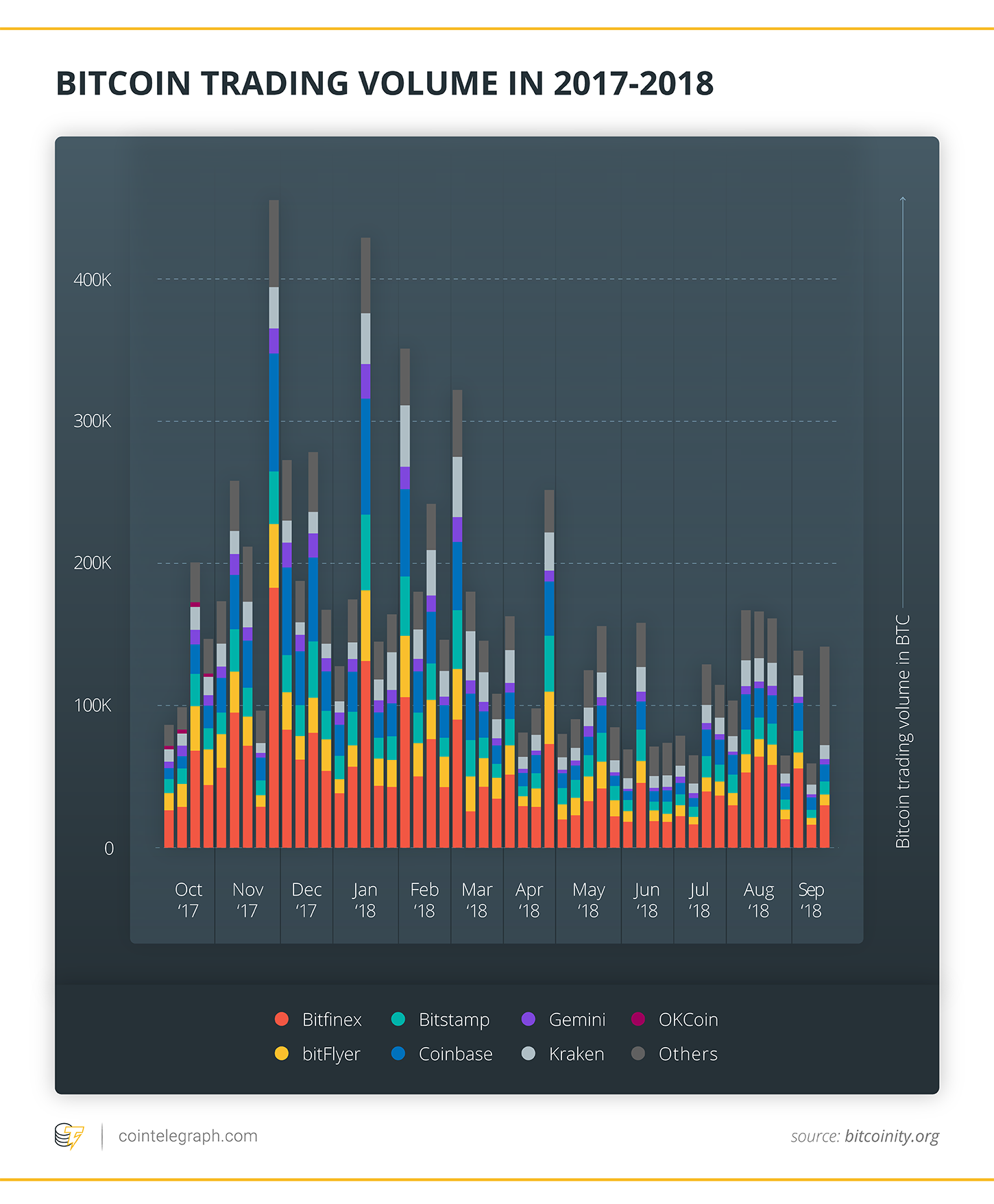 Generally, crypto is still in its early phases of development, like the internet in 1994. Institutions are just preparing to get involved and infrastructures of the market have only started to improve rapidly since mid-2017. As such, it is too early to discuss the possibility of crypto competing against reserve currencies and central banks. Tan stated that the next 18 months could be crucial for crypto, as it will define the long-term trajectory of the market, adding:

“Central banks are a whole other level, and I don’t really know if and when they might decide it is something they [will] use as a reserve currency. That would be super far in the future, [in] my sense. We need to go from [the] infrastructure phase to [the] application phase, and I think that is the main story for the next 18 months. It’s still the internet in 1994.”

In June, Novogratz stated that the crypto market will feel like a bubble once it reaches $20 trillion, after experiencing a hundredfold increase from the current price range.

At the time, Novogratz explained that the next rally of crypto will be fueled by institutions entering the crypto market, triggering FOMO (fear of missing out) among other institutional investors.

“[Cryptocurrency] is a global revolution. The internet bubble was only a U.S. thing. It was rich U.S. people participating. [Cryptocurrency] is global. There are kids in Bangladesh buying coins. It is monstrous in Tokyo, in South Korea, in China, in India and in Russia. We’ve got a global market and a global mania. This will feel like a bubble when we’re at $20 trillion.”

Over the past month, as Cointelegraph reported, Citigroup, Morgan Stanley and Goldman Sachs — three of the largest investment banks in the U.S. — have publicly released their plans to facilitate growing demand for Bitcoin from institutional investors.

Morgan Stanley is said to have already established a system to process funds coming from the traditional finance sector into the crypto market and is currently awaiting an internal procedure to launch its crypto custody.

“It won’t go there [$20 trillion] right away. What is going to happen is, one of these intrepid pension funds — somebody who is a market leader — is going to say, ‘You know what? we’ve got custody, Goldman Sachs is involved, [and] Bloomberg has an index I can track my performance against,’ and they’re going to buy. And all of the sudden, the second guy buys. The same FOMO that you saw in retail [will be demonstrated by institutional investors].”

The deployment of crypto custodian solutions by regulated financial institutions and strengthening infrastructure around crypto will increase the probability of institutional investors committing to cryptocurrencies, which may increase the chances of the crypto market potentially achieving hundreds of trillions of dollars in valuation.