Roger Ver wants Bitcoin.com to have its own crypto exchange, while CNBC’s Ran Neuner thinks Bitcoin’s price could soon “explode.”

Ran Neuner, crypto analyst and host of CNBC’s show Cryptotrader, said this week that the price of Bitcoin is “about to explode.” In a series of tweets, the trader predicted that a notable Bitcoin rally could be tied to the SEC’s upcoming decision on several BTC ETF applications. Neuner hypothesized that Bitcoin’s climb to $20,000 in December 2017 was “on the back of  the expectation and launch of a cash settlement BTC futures contract.”

According to an announcement from Venezuela’s vice president, Venezuelans can only use the state-backed cryptocurrency, the Petro, to pay for passport fees starting Oct. 8. The newly raised passport fees will cost either 2 petros for a new passport or 1 petro for an extension. According to Bloomberg, the average monthly minimum wage in Venezuela is four times less than the cost of the new fee.

Bitcoin.com, a Bitcoin and Bitcoin Cash services firm with Roger Ver as CEO, is planning to either buy or set up its own cryptocurrency exchange. According to Ver, the crypto trading platform will be set up on the Bitcoin.com website, thus generating “thousands or tens of thousands of new users every single day.” Earlier this week, Ver underlined that digital currencies will lead the world to economic freedom, stating that he will “never give up” until cryptocurrencies accomplish this goal.

A recent study conducted by Juniper Research has found that the cryptocurrency market could soon “implode” and that transaction volumes are decreasing. In their report, Juniper looks at the technical, social, and regulatory concerns of digital currencies, also examining regulatory developments globally, exchange failures, hacks, and blockchain forking and how it all impacts crypto volatility. The report also found that daily BTC transactions have fallen from $3.7 billion to around $670 million from the end of 2017 to September 2018.

“The inequality coefficient of BTC is worse than North Korea that has the worst inequality on earth. Crypto beats Kim Jong-un in regards to centralization and inequality," — Nouriel Roubini, New York University economics professor, known as "Dr. Doom" for predicting the 2008 financial crisis

The European Securities and Markets Authority (ESMA) said this week that it will be looking into ICOs in order to determine how they should be regulated. The organization, established in 2011 with the aim of creating a common set of guidelines for E.U. financial markets and their supervision, plans to assess ICOs on a case-by-case basis to see how they comply with existing securities regulations.

Ukraine’s Ministry of Finance has announced the creation of a working group with the aim of discussing and developing a legal framework for cryptocurrency taxation. The group will begin work in mid-October, identifying crypto-related tax options within the current legal framework, and then presenting their findings by the end of 2018. Previously, a proposed bill for crypto taxation suggested a five percent tax for individuals and legal entities that possessed coins and tokens.

Legal Expert: Implementation Of Crypto Regulations In The U.K. Would Take About Two Years

Legal Director of a prominent U.K. law firm Reynolds Porter Chamberlain (RPC) Jeff Kaufmann has said that implementing cryptocurrency market regulations could take the country two years. According to Kaufmann, the new regulations would imply the involvement of the U.K.’s financial watchdog, the Financial Conduct Authority (FCA), which in turn raises concerns about the agency’s readiness for its upcoming role as a cryptocurrency industry regulator.

U.S. tech firm IBM has launched its blockchain-based food tracking network, Food Trust, along with major food retailer Carrefour. The France-based company, which operates more than 12,000 stores in 33 countries, will begin by testing blockchain in their own stores, with the goal of bringing the tech to all its brands by 2022. Food Trust, which was announced back in 2016, has been tested by IBM for 18 months.

Dubai’s State-Backed Digital Currency Gets Its Own Payment System

Dubai’s government-backed digital currency, emcash, will get its own payment system through a deal with blockchain payment provider Pundi X and its partner Ebooc Fintech & Loyalty Labs LLC. The subsidiary of the Dubai Department of Economic Development will work with the two firms to facilitate point of sale payments in emcredit’s emcash currency. The digital currency is pegged to the United Arab Emirates fiat currency, the dirham.

Financial services heavyweight Mastercard has been awarded a patent by the U.S. Patent and Trademark Office for a method to partition a blockchain. The proposed technology would allow a single distributed ledger to support multiple types and formats of transactions. In the patent, Mastercard noted that using multiple blockchains simultaneously leads to “significant” resource consumption – a problem their new solution is purported to solve.

Blockchain cloud computing platform Oasis Labs announced a partnership this week with names including Andreessen Horowitz’s crypto venture fund a16zCrypto, Accel, Binance Labs, Pantera Capital, and Polychain Capital, who will assist developers in building “privacy-first” DApps in a new tech hub. The Oasis Startup Hub, which will focus on the creation of a space for collaboration between blockchain developers, investors, technologists, and industry key-players, will also get support from Oasis Labs engineers.

Auditing giant PwC has partnered with decentralized lending platform Cred to act as a tech advisor in the release of their USD-backed stablecoin. According to the press release, the partnership aims to bring more trust to investors, and solve the problems of transparency and “substantiation” that keep investors out of the crypto space. The firm also will give a perspective on enhancing standards in order to provide a “more transparent set of reserve functions.”

Forbes Partners With Civil To Publish Content On Blockchain

International business media outlet Forbes has partnered with blockchain-based journalism platform Civil to publish its content on a decentralized network. Initially, Forbes will only publish crypto-related news through Civil’s software — which will be integrated with Forbes’ own content management system (CMC) — but will move over more content if the testing is successful. Forbes will also use smart contracts to allow their contributors to upload articles to Forbes’ CMS and then share them on other platforms, such as LinkedIn and Medium.

IBM and the Central Bank of Azerbaijan (CBA) will reportedly collaborate on implementing blockchain technology for a digital transformation of the country’s economy. According to a local Central Asian news outlet, the director of the Information Technology Department at the CBA  revealed news of the five-year digital economic program this week, noting that IBM will work with the bank on blockchain development. The director also noted that a digital identification system is in the works.

A group led by startup investor and one of South Korea’s most famous plastic surgeons Dr. Kim Byung Gun, has made a major investment in Bithumb’s holding company. According to Bloomberg, 50 percent plus one share has been purchased, making the surgeon’s BK Global Consortium the majority shareholder of the Korean exchange. As of press time, Bithumb is the largest crypto exchange in the world by reported daily trade volume, which amounts to almost $1.04 billion.

Ethereum Classic’s investment branch ETC Labs has announced the launch of its business incubator, slated for Q1 2019. In an interview accompanying the announcement, Elizabeth Kukko, the director of the program, has revealed that the incubator plans to work with as many as 24 startups each year. According to Kukko, ETC Labs has so far received 120 applications from various companies in the industry. 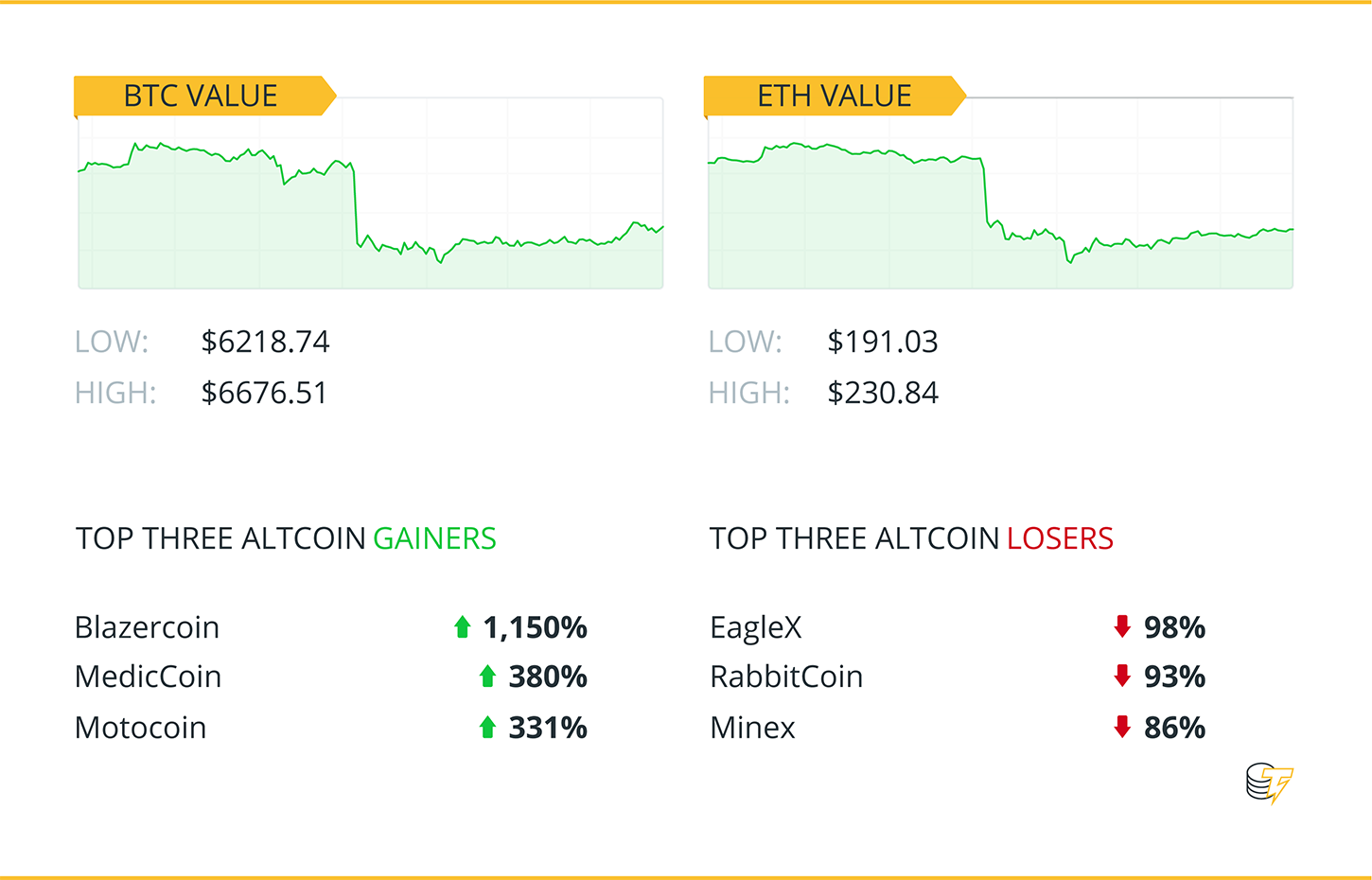 Top three altcoin losers of the week are EagleX, RabbitCoin, and Minex.

American economist Nouriel Roubini has testified at a U.S. Congress hearing with a speech “debunking” cryptocurrencies and blockchain. In his scathing review, Roubini mentioned such factors as Bitcoin’s scalability problems, high energy consumption and low decentralization, among others. Roubini’s attack on the crypto space was not limited to the congressional hearing, as he made multiple anti-crypto tweets this week — after comparing crypto to North Korea he went as far as to claim that the idea of crypto is “fascist at core.”

Coinfloor, the oldest British digital currency exchange, is laying off the majority of its employees, unnamed sources stated this week. The exchange, which was founded in 2013 and has traded $1 billion in Bitcoin over the past 12 months, is apparently going to let go most of its around 40 employees. When asked about the rumors, the exchange’s CEO Obi Nsowu said that they are “making some staff changes and redundancies” as part of a business restructure.

A Diar report this week showed that crypto exchange and wallet Coinbase has seen a 1-year low in U.S. dollar volumes in the the third quarter of 2018. According to the analysis, Coinbase’s USD volumes have dropped to the lowest level during the past year, although the trading volume of BTC is almost $1 billion higher than last year. Crypto exchange Bitstamp has seen a better performance in this regard, Diar notes, with the trading volume of BTC $0.2 billion less this year than last year.

China: Man Gets 3.5 Years Of Jail Time For Stealing Train Station Power To Mine BTC

A man in China has received three and a half years of jail time for stealing power from a train station to support his Bitcoin mining. According to court documents released this week, the individual was also fined around $14,500 for stealing electricity from a factory at the Kouquan Railway from November to December 2017 to power his 50 BTC miners and 3 electric fans.

SpankChain, an Ethereum-based adult entertainment platform, lost around $38,000 when it suffered a smart contract breach this week. The anonymous hackers stoles around 165 ETH, as well as caused the immobilization of another $4,000 of SpankChain’s internal token, BOOTY. The platform has later said that it got in contact with the hacker and persuaded them to return the stolen assets for a “reward” of $5,000 in ETH.

Blythe Masters: “Tens If Not Hundreds” Of Blockchain Projects Coming To Commodities

Blythe Masters, a former JPMorgan executive who is now CEO of her own software digital firm Digital Asset Holdings, said this week that commodity supply chains would soon get an influx of “tens if not hundreds” of blockchain projects to improve efficiency. Speaking at the London Metal Exchange annual dinner, Masters noted the complexity of supply chains, adding that Digital Assets Holdings is designing software to aid the trading sector in blockchain implementation.

A hedge fund manager-turned-artist Nelson Saiers has put up an inflatable white rat covered in crypto code on Wall Street, facing the Federal Reserve Bank. According to the artist, he was in part inspired by billionaire investor Warren Buffet’s comments about Bitcoin, who called it “rat poison squared.” “If the Fed’s a rat, then maybe rat poison is a good thing,” Saiers said.

According To Google, Bitcoin Has Several CEO Candidates Who All Hate Bitcoin

Several Reddit users have noticed that entering a search query “CEO of Bitcoin” or “Bitcoin CEO” in Google brings up an information carousel with several possible candidates, including the CEO of JPMorgan Chase Jamie Dimon, Bitcoin Cash proponent Roger Ver, and CEO of Mastercard Ajay Banga. Curiously, all three are known for their negative stance on Bitcoin, with Dimon calling it a “scam,” Banga saying that all non-government-backed cryptos are “junk,” and Ver being hit with allegations of using his platform to mislead people into buying Bitcoin Cash, instead of Bitcoin.