A new report from weekly crypto outlet Diar suggests that even as the crypto market crashes, traders are not taking “a punt on the bargain,” and trading volumes are down.

6605 Total views
135 Total shares
Listen to article
0:00
News
Own this piece of crypto history
Collect this article as NFT

Diar’s data, sampled from across eight leading crypto exchanges  — Binance, OKex, Huobi, Bitfinex, Kraken, Poloniex, Bittrex, HitBTC — reveals that 60 percent of cryptocurrencies that continue to be listed as of Jan. 2018 are now trading at lower volumes than at the start of the year.

Over 20 percent of these have experienced an extraordinary drop, today seeing less than 90 percent of the trading volumes they saw during the crypto market bull run this January.

The reports states that, even as the crypto market crashes, traders are not rushing in to take “a punt on the bargain.” 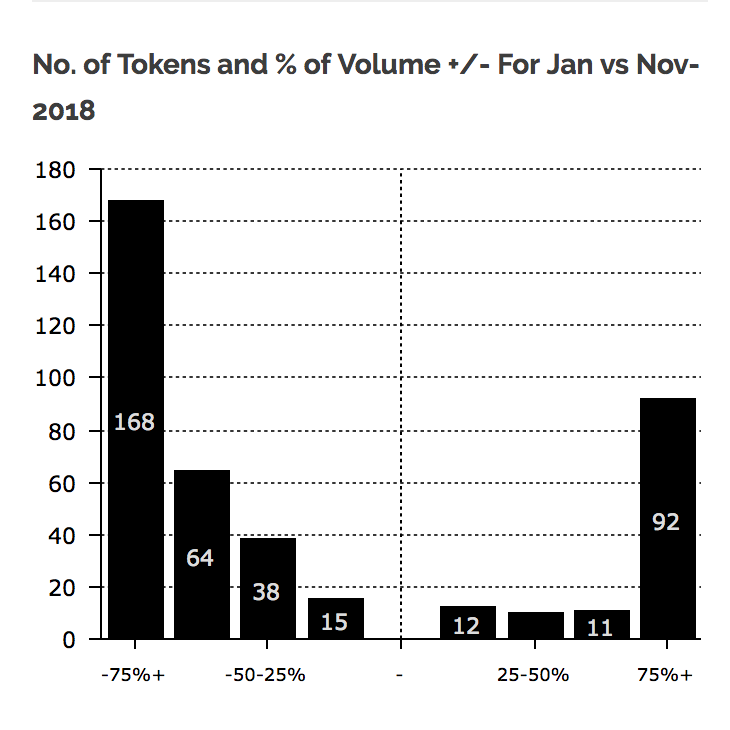 As the report shows in more detail, Diar’s liquidity data varies significantly when it is broken down by crypto exchange: on Poloniex, all listen tokens have lower trading volumes compared to the start of the year. At the other end of the spectrum, for Bittrex, it is only three. Diar continues:

“The outliers, by reported volume at least, are OKEx and Huobi, with Binance having a fairly equal share of trading volumes across the percentage bands. Just under half of Binance's listing have decreased volumes compared to the start of the year.”

Notably, over 75 percent that were first listed in 2018 have seen their volumes “in complete decline October versus November,” going against the grain of an “out with the old, in with the new” hypothesis.

In an interview earlier this month, Changpeng Zhao, CEO of the world’s largest crypto exchange Binance, said the company was “not worried” by declining trade volumes. He remarked that while the platform currently has one tenth the trading volumes it did in January, volumes are nonetheless far above where they were “two or three years ago” and business is “still profitable.”