Almost All Top 100 Coins in Red, Bitcoin Holds Weekly Gains After Dipping Below $5,500

Bitcoin is hovering below $5,500, down about 2% over the day but still holding firm gains over the past 7 days.

Wednesday, April 24 — after hitting new highs for 2019 yesterday, cryptocurrency markets have again reversed to red, with virtually all of the top 100 coins by market cap seeing major losses on the day, according to data from CoinMarketCap.

A former entrant of the top 20 coins by market capitalization, ontology (ONT) is seeing the biggest losses over the past 24 hours at press time among the top 30, down more than 11%. Basic attention token (BAT), which has recently overtaken ontology to enter the top 20, has surged 6%, also up around 30% over the past 7 days. 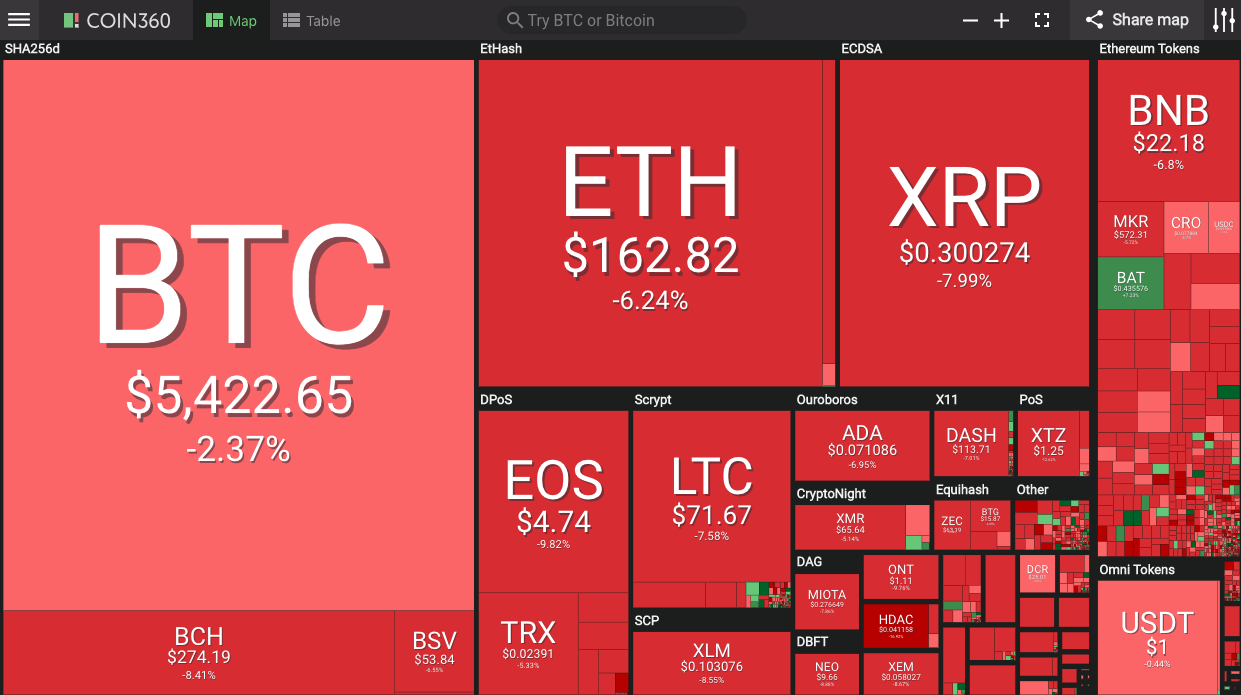 Bitcoin’s dominance on crypto markets has continued to surge, up from 53.5% in the beginning of the day to the current 54.7%, which is a new market share record for bitcoin since December 2018. Earlier on the day, bitcoin’s market cap has almost touched $100 billion for the first time since mid-November 2018.

The total market capitalization amounts to $177 billion at press time, down from yesterday’s high of $185 billion. Meanwhile, the daily trade volume has risen significantly to around $55 billion from yesterday’s average of $49 billion.

Earlier today, South Korean electronics giant Samsung was reported to be developing an ETH-based blockchain along with its own cryptocurrency token, allegedly dubbed the Samsung Coin.

While the crypto markets have slipped today, the United States stock market hit new highs over the day, while the Nasdaq (NASDAQ) Composite rose 0.2% to hit an intraday high. Yesterday, Cointelegraph reported that Nasdaq was allegedly testing trading of a bitcoin-based product. At press time, the Dow Jones Industrial Average (DJIA) and S&P 500 (SPX) are up 0.05% and 0.01%, respectively.

Oil prices reportedly hovered around six-months highs after the reportedly rising United States’ crude stockpiles countered fears of a tight supply resulting from OPEC output cuts and U.S. sanctions on Venezuela and Iran. Over 24 hours to press time, the OPEC basket is up around 1.3%, while West Texas Intermediate (WTI) crude oil and Brent crude tumbled to 0.8% and 0.4% respectively, according to Oilprice.com.

Meanwhile, gold prices rose from the previous session’s four-month low, as a U.S. dollar rally relented and equities softened today, CNBC reports. Spot gold is up about 0.4% to $1,277 per ounce at press time, while U.S. gold futures gained around 0.6% to 1,280 per ounce.