Canada’s volatile history of mainstream adoption and fraud is directly impacting the future of cryptocurrency in the country.

Recently, Canada’s central bank has been leading working groups with global partners exploring a blockchain future. Their crypto presence has soared with Ernst & Young’s announcement that it is using Toronto to test its public government expenditure blockchain. But what is the cryptocurrency landscape currently like in Canada?

The history of crypto in Canada may seem as volatile as a token with a small market cap, yet mainstream use and adoption have been on a consistent incline since 2013, when Canadians started pushing mainstream adoption. Now, the Canadian government is leading working groups. What else has the country been up to in the blockchain space?

The first thing that comes to everyone’s mind when it comes to the Great White North is that the founder of Ethereum, Vitalik Buterin, grew up in Canada — but Etherum isn’t all the country has provided to the crypto space. Here are some more notable stories from Canada’s blockchain history. 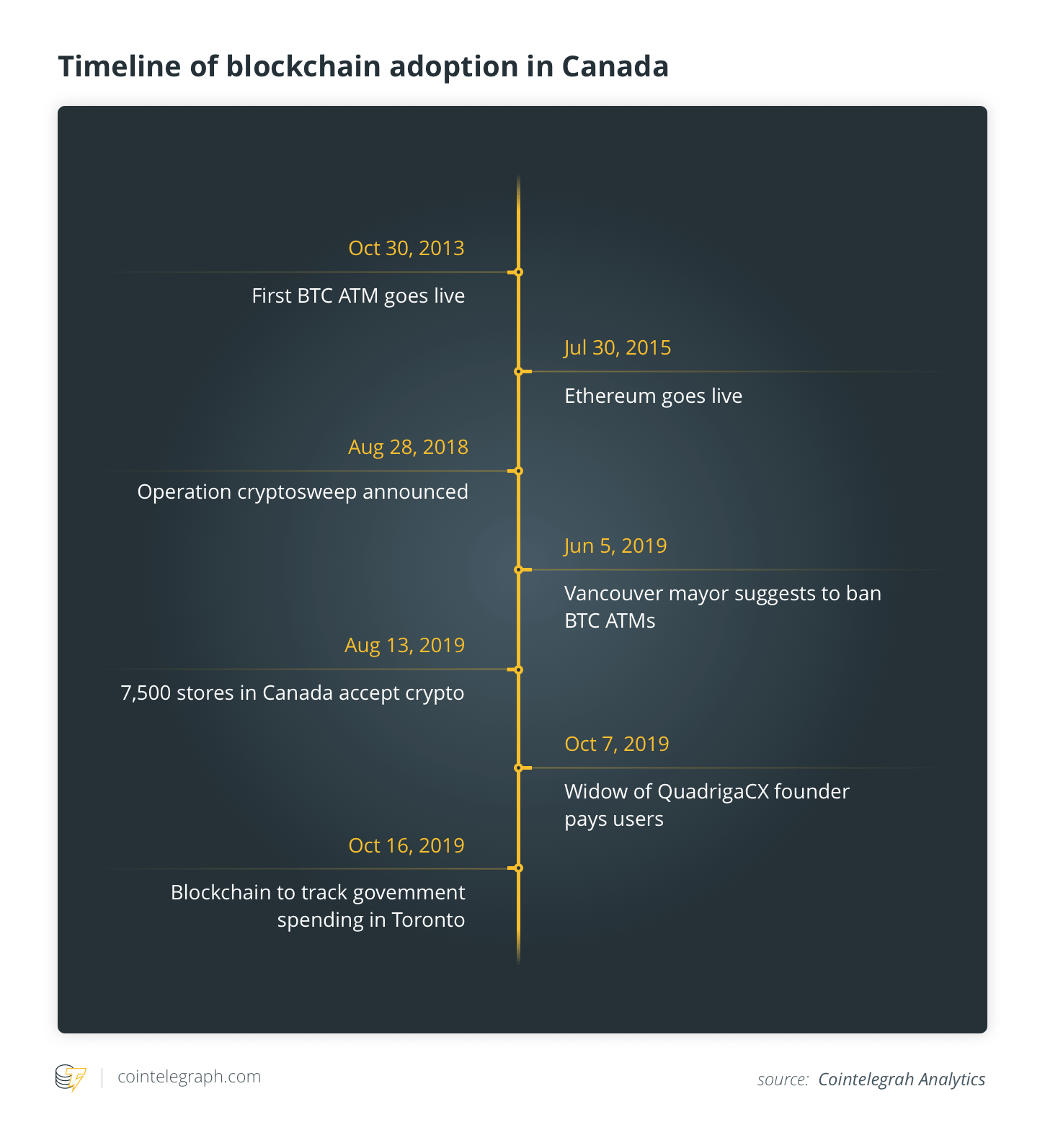 Canada contributed to Bitcoin’s (BTC) mainstream use early on by opening the world’s first Bitcoin ATM at a coffee shop in Vancouver in 2013. The ATMs were released by Bitcoiniacs and Robocoin. Bitcoin was trading at around $200 at the time and, during the first day, the kiosk performed 81 Bitcoin transactions equaling around 81 BTC.

The ATM is considered a strong driver for attracting new people to cryptocurrency, with around a third of its users new to Bitcoin. In an interview with Cointelegraph back in 2013, Robocoin CEO Jordan Kelley marveled at how easy it was for people to get started with Bitcoin. According to industry monitor CoinATMRadar, there are at least 715 cryptocurrency ATMs in Canada, with 85 in Vancouver and 227 in Toronto.

It is easy to agree that the initial coin offerings (ICOs) craze produced more losers than winners, as many took advantage of the hyped-up funding method to conduct scams. In response, state and provincial securities regulators in the United States and Canada launched probes into potentially fraudulent crypto investment programs as part of the North American Securities Administrators Association’s Operation Cryptosweep in 2018. The initiative is reportedly the largest coordinated investigation held by state and provincial officials targeting suspicious crypto investment products, and has resulted in over 200 investigations of ICOs and crypto-related investment products.

Operation Cryptosweep has issued at least 77 actions against crypto programs, including the infamous BitConnect, which has gone down in history as one of the largest cryptocurrency scams.

The mayor of Vancouver, Kennedy Stewart, suggested a complete ban on Bitcoin ATMs in the summer of 2019 due to Anti-Money Laundering (AML) issues associated with the ATMs. The associated police report claims that criminals could purchase a Bitcoin ATM for their own needs for a few thousand dollars, and then deposit their cash into that ATM “as many times as required” to profit from or eliminate the transaction fees. 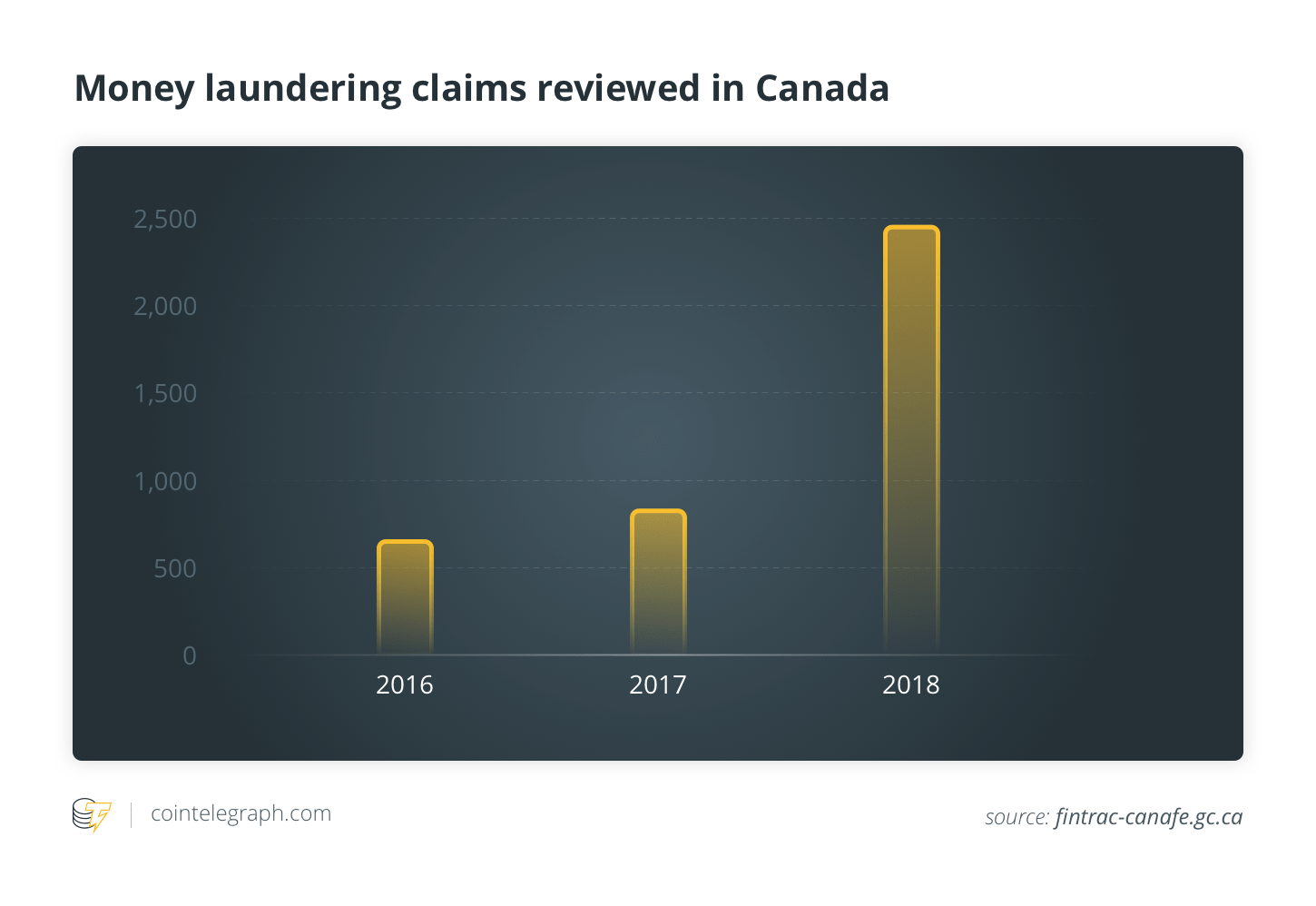 “I do not think that cryptocurrency holders try to laundering money in Canada because they are obligated to pay taxes. Many countries do not require holders to pay taxes from their crypto income making them more attractive to bad actors.”

However, not all news surrounding Canada recently has been negative.The Winklevoss-backed cryptocurrency payments service Flexa, which allows merchants such as TopGolf to accept cryptocurrency, has seen strong acceptance around the country.

Related: Where to Spend Bitcoin: A Global Overview From Ljubljana to Zurich

Current estimates show that over 7,500 businesses have signed up on the platform to offer crypto payments to their customers, indicating that business owners in Canada see a need to provide payment solutions in crypto.

A review of Canada in cryptocurrency would not be complete without talking about QuadrigaCX, a defunct Canada-based exchange. The company began grabbing headlines ever since its CEO Gerald Cotten was declared dead in India without ever having revealed the keys to access the company’s cryptocurrency reserves. When these reserves were discovered inaccessible, the business became insolvent, declaring bankruptcy.

Recently, the widow of QuadrigaCX Founder Gerald Cotten, Jennifer Robertson, paid $9 million in assets to the users of QuadrigaCX through EY. Robertson wrote in a personal statement, “The vast majority of my assets and all of the Estate’s assets are being returned to QCX to benefit the affected users.”

While the widow may not have been aware of her husband’s alleged malfeasance, what happened suggests that Canada is determined to rid cryptocurrency of fraud to protect both investors and holders. According to EY, Robertson’s late husband created fake accounts under several pseudonyms and used them to trade users’ money on the QuadrigaCX platform to show artificial income. The auditor also said that much of the funds were eventually transferred to personal accounts that he controlled.

The Blockchain Consensus report was released on Oct. 4, 2019 by the Chamber of Digital Commerce Canada, exploring the blockchain ecosystem in Canada. The report takes a closer look at Canada’s blockchain ecosystem, breaking down insight by region and company size. The report also states that government commitment is desperately needed to move this highly innovative technology sector forward by providing legal clarity.

Further, the report includes statistics that highlight the average annual blockchain salary in Canada sitting at more than $98,000 Canadian dollars, making blockchain careers among the highest-paying in the country. The CEO of Shortex, Vladimir Prosvirkin, remarked on this report to Cointelegraph:

“Canada is one of the leading countries adopting blockchain technology on a corporate level. Every second company is invested in blockchain somehow last year. Due to the country’s low energy cost, high internet speeds, and favorable regulations, blockchain and cryptocurrency industries have always prospered here.”

In an effort to increase transparency, EY started tracking how public funds are spent in the capital city of Toronto. As reported by Cointelegraph on Oct. 16, the system can track the government’s public funds as they move through different state agencies, providing transparency to the public.

According to EY, data provided by the platform can potentially be used to better inform future decision making on policies. Upon the pilot program’s launch, EY issued a statement, “Blockchain technology can positively impact processes from tax collection to open data to public spending.” A Bitcoin-conscious and highly functioning city like Toronto may benefit from greater transparency in government spending and provide an important use case.

On Oct. 13, 2019, the Bank of Canada released results from the G-7 working group on stablecoins that was tasked with “investigating the impact of global stablecoins” as a whole. While much has been written about the strong language in the report, such as “Stablecoins pose a threat to financial security,” it also outlines ways in which governments and digital securities can work together. Participants included the Bank of England, the Bank of Canada, the Bank of France, the European Central Bank, the Bank of Italy, the Bank of Japan and the United States Department of Treasury.

On the eve of the G-7 working group, Anthony Pompliano, co-founder and partner at Morgan Creek Digital, noted that it has taken only a decade from Bitcoin’s creation for the “decentralized digital currency to go from basically the fringes of the internet to now being discussed at the G-7 and other regulatory offices.”

Challenges lie ahead for stablecoins

The report goes on to outline the challenges that stablecoins need to overcome in order for them to remain in compliance. Focusing on private stablecoins, the report highlights that stablecoins, regardless of size, pose some major risks such as regulatory, security, and those relating to financial reporting and misconduct.

“Private stablecoins will need to be more similar to a shield that protects purchasing power and provides security against hacking. When Central Bank’s like Canada issue their own digital currencies and other countries do the same, being able to create stable interoperability between each countries’ fiat onboarding will add the most value to the ecosystem.”

Based on international conversations and the working session led by Canada in conjunction with other countries, it is clear the country sees both value and risk in stablecoins. The working document shows a future where digital currency will utilize banks only as a means for fiat onboarding. The document seems to address two known stablecoin protocols, an algorithmic stablecoin like DAI and asset-backed stablecoins like Tether.

Canada’s blockchain history is marked by triumph and struggle. The Crypto Canucks are constant drivers and mass adoption is incoming through all the perceived barriers. From the first Bitcoin ATM to considering banning Bitcoin ATMs to leading the international community toward adoption, the Great White North has been at the forefront for both cryptocurrencies’ benefits and risks.

While adoption continues to increase, inappropriate regulation could potentially hinder some projects in the country. Guidelines may end up forcing private stablecoins to comply with securities laws in big countries or to even become banks, significantly raising the barrier to entry. Alternatively, countries may turn to outlawing private stablecoins altogether for fear of harm coming to their existing banking systems.