7204 Total views
238 Total shares
Listen to article
0:00
News
Own this piece of history

Tuesday, March 5 — crypto markets have seen a healthy wave of green, with all of the top 20 cryptos seeing a firm recovery after yesterday’s sell off, according to data from CoinMarketCap.

Binance Coin (BNB), the top 20 entrant native to the world’s biggest crypto exchange Binance, is up around 20 percent. The coin is seeing enormous growth over the week, up around 40 percent at press time. 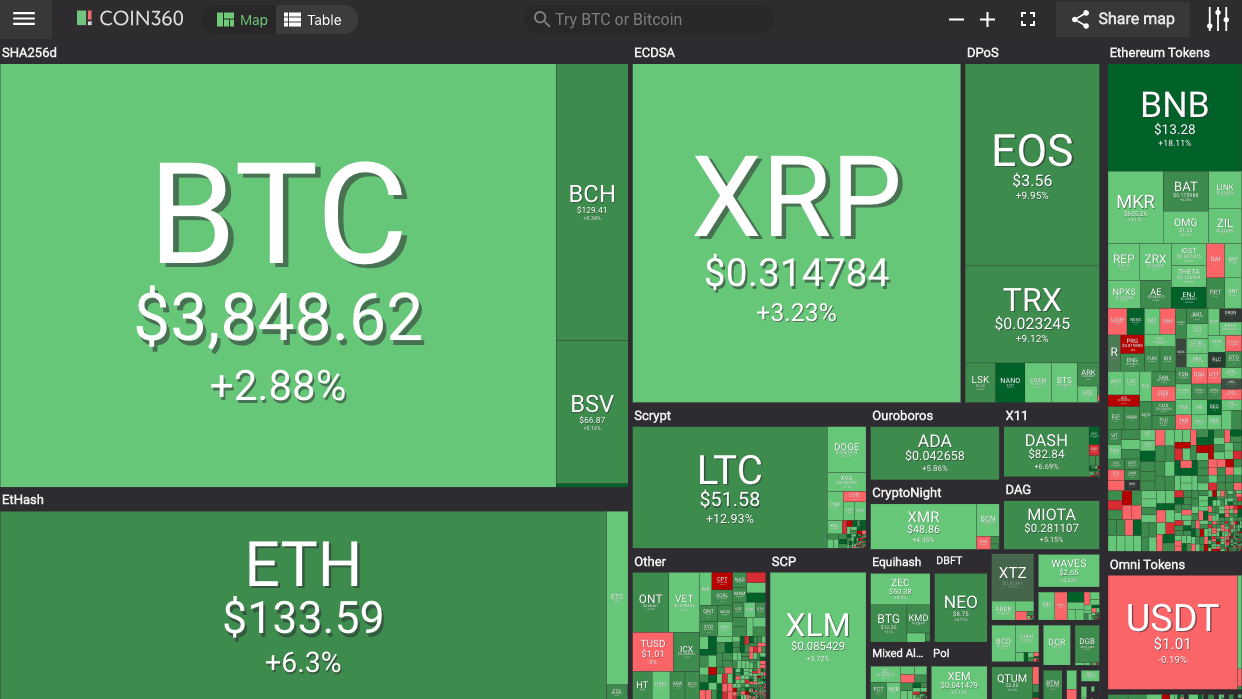 Largest cryptocurrency Bitcoin (BTC) has climbed back up to its $3,800 support, trading currently at $3,876, up more than 3 percent over the past 24 hours at press time. Bitcoin has managed to recover its weekly losses, up around 0.3 percent over the past 7 days. With that, Bitcoin’s dominance on the market has slightly dropped from yesterday’s 52.5 percent to 51.9, according to CoinMarketCap.

Ethereum (ETH), the second cryptocurrency by market cap, is up almost 7 percent, trading at $135.6 at press time. However, the top altcoin is still down some 1.7 percent over the past 7 days.

Ripple (XRP), the third-top cryptocurrency by market cap, is up 3 percent, trading at $0.314 at press time. Following major losses during the week, Ripple is still down more than 2 percent over the past 7 days.

While the most of top 20 cryptos by market cap are still in the red in weekly terms, EOS (EOS) is up around 3 percent over the past 7 days. In contrast, Bitcoin SV (BSV), the Craig Wright-supported hard fork of Bitcoin Cash (BCH), is seeing the biggest losses over the week, down around 8 percent.

Total market capitalization is up to $130 billion from yesterday’s low of $125 billion, with daily trade volume also seeing an increase to $30 billion. The number of cryptocurrencies listed on CoinMarketCap accounts for 2,101 coins at press time.

U.S. stock futures reportedly opened flat today after seeing sufficient growth on Monday, as investors weighed ongoing trade talks with China, according to CNBC. At press time, the Dow Jones Industrial Average (DJIA) is down around 0.8 percent, while the S&P 500 (SPX) and Nasdaq (NASDAQ) Composite are down 0.4 and 0.2 percent respectively.

Meanwhile, oil prices have risen on Tuesday amid OPEC’s efforts to tighten supply offset, the restart of Libya's biggest oilfield and the prospect of weaker demand, CNBC reports. According to Oilprice.com, international benchmark Brent crude is up around 0.05 percent to $65.7, while U.S. West Texas Intermediate crude (WTI) is up 0.23 percent to $56.7 at press time.