Thursday, May 2 — yesterday’s mild market movements continues, with most of the top twenty cryptocurrencies seeing mild green on the day at press time with typical growth of between 1 and 3%, as Coin360 data shows. 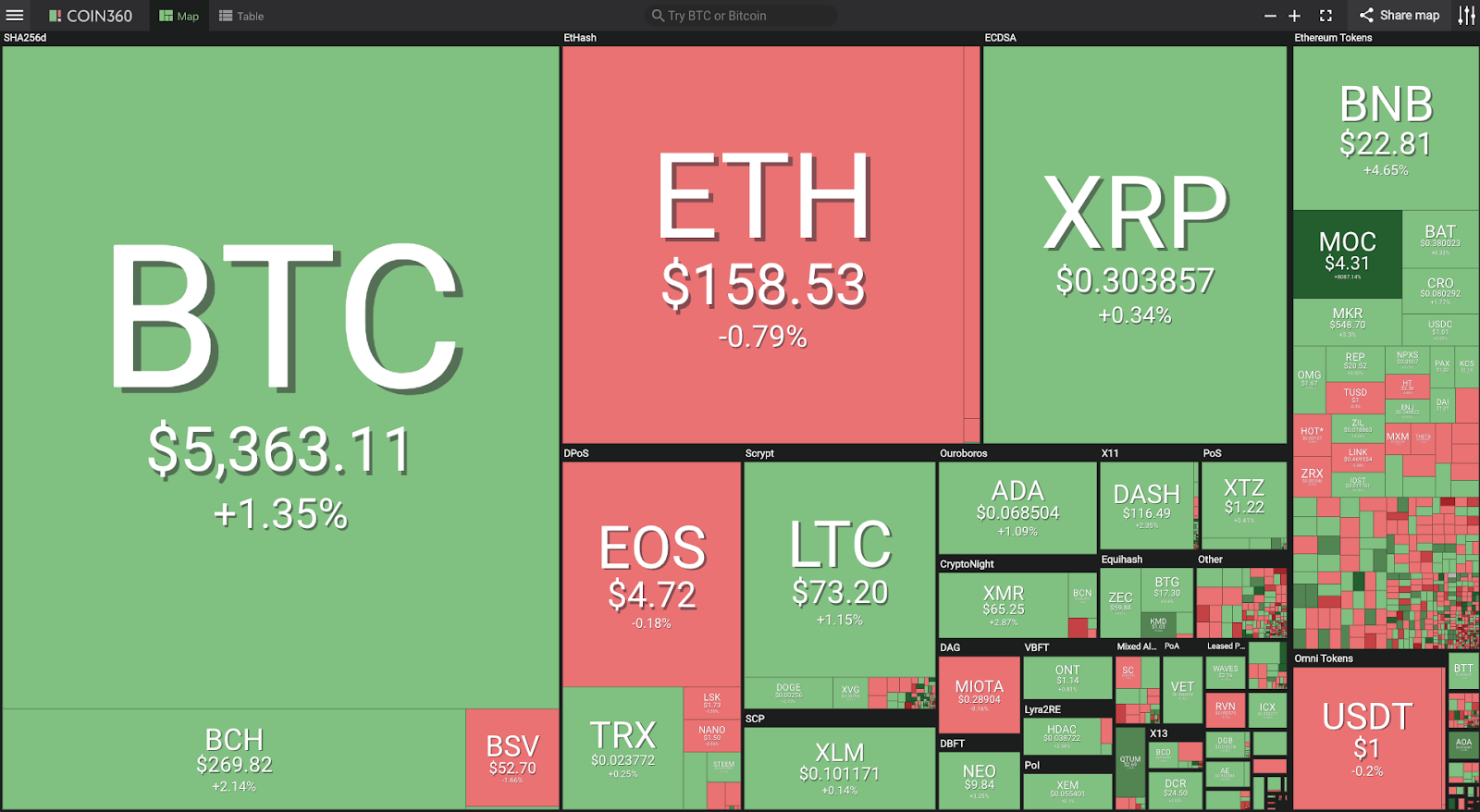 Bitcoin (BTC) is up 1.4% on the day and is trading at $5,455 by press time, according to CoinMarketCap. After a bullish spike at the start of its 7-day chart — with a break above the $5,500 mark on April 26 — the top cryptocurrency swiftly saw a sharp tumble down to below $5,200 that same day. Since then, the top cryptocurrency has recovered positive momentum and has today come close to trading as high as $5,470. 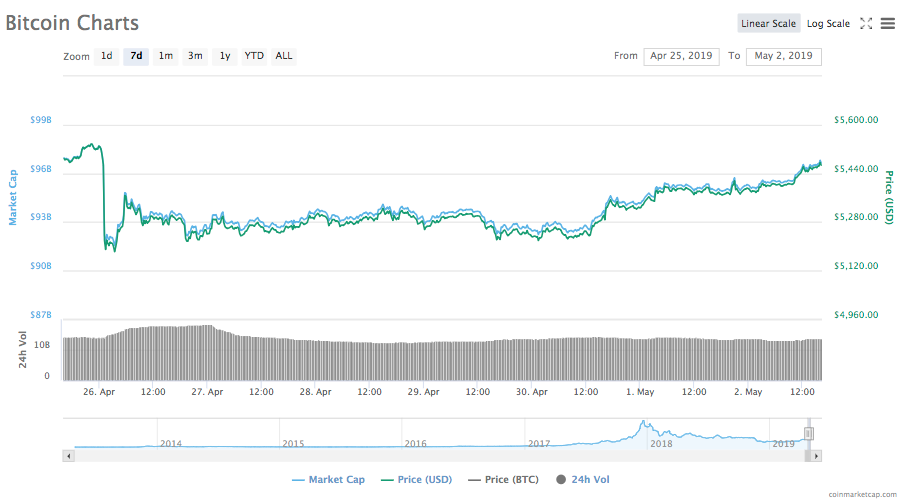 The largest altcoin by market cap, ether (ETH), is seeing virtually no price change over the past 24 hours and is trading around $160.93. The alt spiked in correlation with bitcoin on April 26 — hitting close to $166 — before seeing several days of mild corrections and fluctuations at a slightly lower price point. On the week, ether has reported a 2.5% loss. 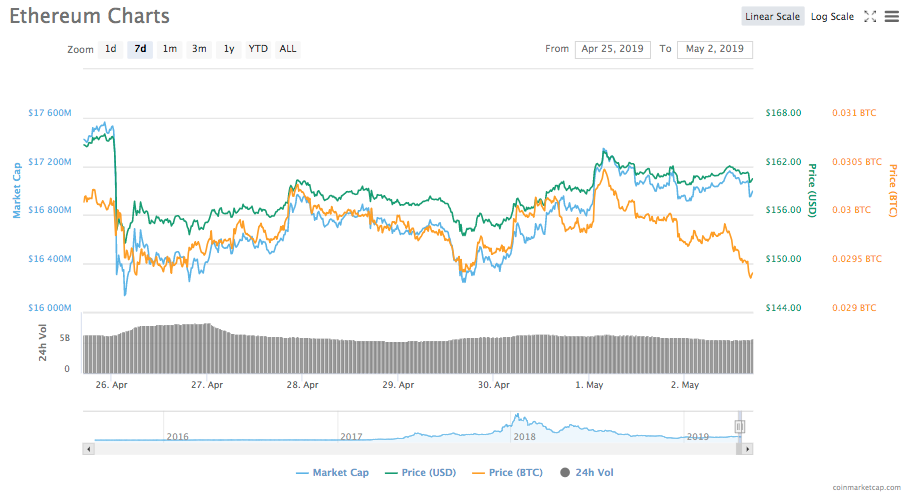 XRP has similarly seen virtually no price change on the day and is currently trading at $0.304. The asset saw its 7-day price high yesterday — at $0.311 — on May 1, during early trading hours, but has since corrected downwards. On the week, XRP has sealed a 0.43% slight gain. 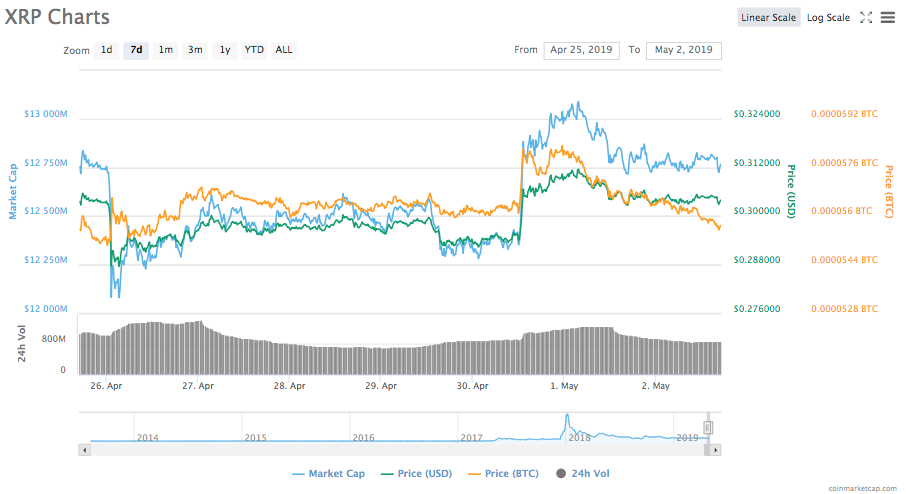 The top ten cryptocurrencies are largely green, almost all capped below a 3% gain, with the notable exception of native exchange token binance coin (BNB) — which has spiked 7.46% on the day to trade at $23.39. The only coin not in the green is eos (EOS), which has seen a minor 0.5% loss at $4.71.

Widening out to the top twenty, cryptocurrencies are again largely green, seeing gains below 3.5%, but with a scattering of red — bitcoin SV (BSV), cosmos (ATOM) and ethereum classic (ETC) are all reporting mild losses of below 1%.

Aften BNB, the highest gainer is among the top twenty cryptocurrencies is neo (NEO), which is up 3.3% to trade at $9.90.

The total market capitalization of all cryptocurrencies is currently around $177.06 billion — around $1.9 billion shy of its weekly peak on April 25.

Weekly high in the 7-day chart for the total market capitalization of all cryptocurrencies. Source: CoinMarketCap

In crypto and blockchain news, Hong Kong-listed contractor turned blockchain investor Grandshores Technology has revealed plans to enter the medicinal and industrial cannabis market in a bid to counter the adverse impact of crypto winter.

In an interview with reporters, the firm’s co-chairman is said to have stated that “both blockchain and industrial cannabis are the future, and both are embraced by the younger generation.”

Also today, the CEO of the London Stock Exchange has expressed confidence that blockchain could be implemented in issuing securities and settlement.

In South Korea, the national financial watchdog authorized nine fintech companies — among them blockchain service providers — to operate in the country as part of a regulatory sandbox.

In traditional markets, United States stocks edged lower at opening, with the Dow down 0.2% (or 47 points), and both the S&P 500 and Nasdaq Composite opening 0.1% lower, according to CNN.

Meanwhile, stock for Tesla — whose CEO is the well-known entrepreneur Elon Musk — reportedly climbed 4.4% following its announcement that it plans to raise $2 billion through the sale of additional shares.