11300 Total views
331 Total shares
Listen to article
0:00
Analysis
Own this piece of history

Japan has been a land of firsts when it comes to crypto, even if "Satoshi Nakamoto" isn't really Japanese. It's the country where Mt. Gox — the first major crypto exchange — was based, as well as the first nation to accept bitcoin as legal tender. And last July, it became the first country to host a bank-owned cryptocurrency exchange, when financial services giant SBI Holdings launched the SBI Virtual Currencies (SBIVC) platform.

At the time of its launch, SBIVC — called VCTRADE at the time — enabled trades in only XRP, bitcoin (BTC) and bitcoin cash (BCH). Yet, as limited as it may have been, its attachment to the SBI stable meant that it benefited from access to resources and technology other exchanges in Japan could only envy. And as SBI's latest financials revealed in April, the exchange has grown rapidly, recording pretax earnings of almost 360 million Japanese yen (approximately $3.2 million) for the fiscal year up until March 31, 2019.

But while it may still remain something of a minnow in a sea of BitFlyers and Coinchecks, it told Cointelegraph that it has plans to expand in the near and more distant future. Aside from widening its range of tradable cryptocurrencies, it also wants to branch out to institutional investors, as well as take advantages of potential "synergies" with its current businesses to provide one of the most secure and convenient exchanges in Japan. 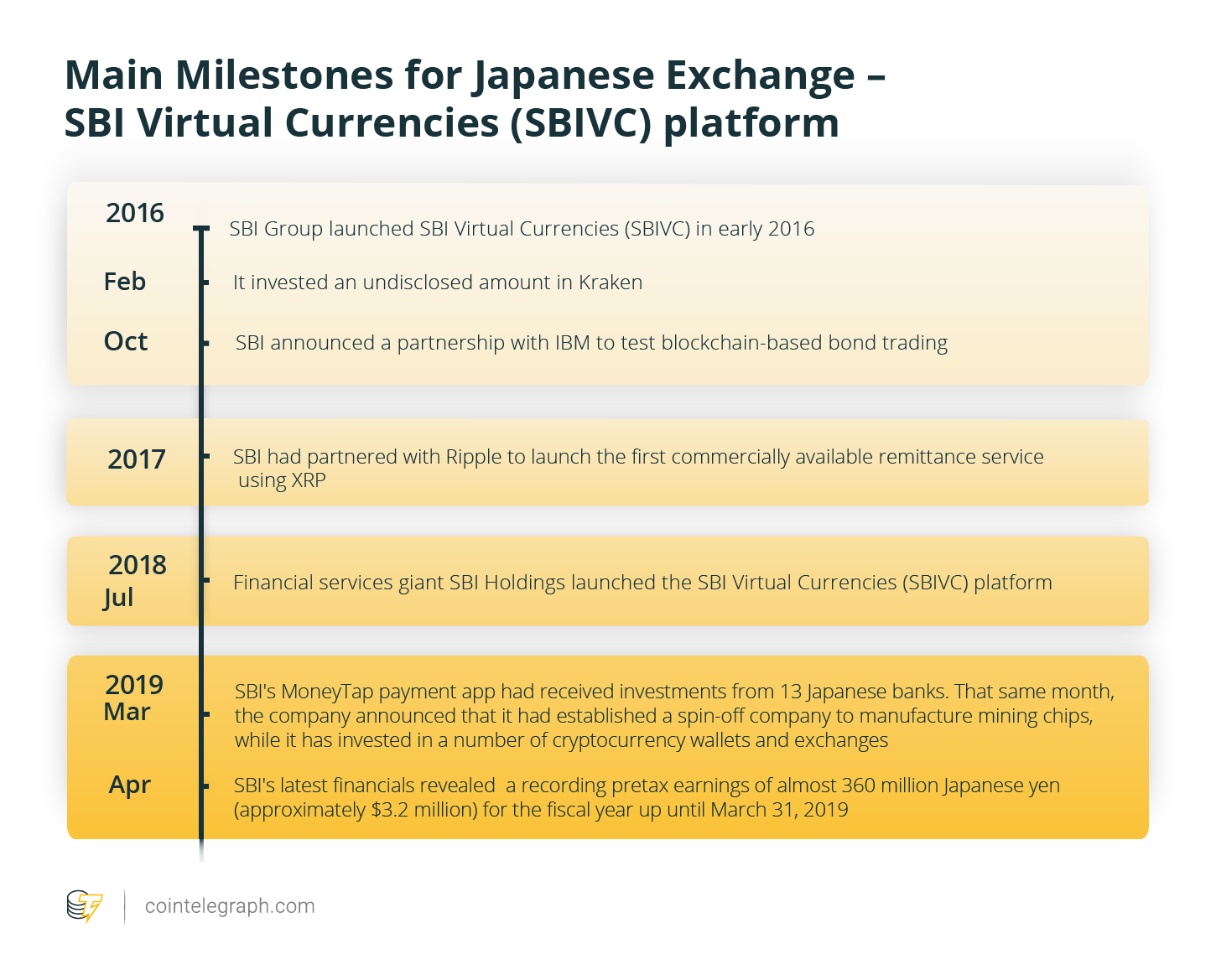 Given that SBI had previously partnered with Ripple in 2017 to launch the first commercially available remittance service using XRP, it was perhaps unsurprising that on July 11, 2018, it announced the opening of its VCTRADE cryptocurrency exchange, which first offered only XRP for trading, adding bitcoin and bitcoin cash soon after launch.

However, beyond a crypto exchange arguably being a logical extension of a Ripple-based remittance service, SBI told Cointelegraph that it ultimately launched SBIVC because it believes in the innovative promise shown by cryptocurrencies.

"The SBI Group believe that innovative technologies, including blockchain and crypto-assets have large potential for changing the financial industry."

On top of this, the SBI spokesperson added that SBI wants to create an ecosystem of interconnected services and platforms, which will create efficiencies for SBI and extra value for customers:

"As the group’s basic strategy, we take an ecosystem approach, in which a business would make synergies with its other businesses. SBI Group fully started its digital asset ecosystem in early 2016, and as part of the strategy, launched SBI Virtual Currencies (SBIVC)."

Indeed, going as far back as 2016, SBI Holdings was involving itself in the cryptocurrency industry. In February 2016, it invested an undisclosed amount in Kraken, while in October of that same year, it announced a partnership with IBM to test blockchain-based bond trading. And it was at the end of October that year that it first revealed its plans to launch its own cryptocurrency exchange.

But once again, plans for an exchange weren't only part of an attempt to construct a joined-up ecosystem of financial services, since SBI is firmly convinced that cryptocurrencies offer practical advantages over legacy structures. "The SBI Group see many possible advantages and benefits that digital assets would bring to the current system," SBI's spokesperson said. "For one, lower commission fee and transaction period on international remittance."

SBI in the present

As for how SBIVC functions right now, its website states that it lets customers trade four cryptocurrencies — XRP, bitcoin, bitcoin cash and ether (ETH) — for Japanese yen. It's currently not possible to trade cryptos against each other, and it's set to delist bitcoin cash in June.

Its delisting of BCH raised some eyebrows, with many assuming that it had something to do with the delisting of bitcoin SV (BSV), a fork of BCH that itself had been removed from such exchanges as Binance and Kraken after BSV-affiliated Craig Wright threatened to sue certain individuals for claiming he wasn't "Satoshi Nakamoto." Given that SBI has a business partnership with Wright's nChain, it was suggested that the delisting may have been “retaliation” for bitcoin SV's delisting.

However, according to SBI, the coincidence was just that, a coincidence, with its decision to remove bitcoin cash "unrelated to the delisting of Bitcoin SV by several non-Japanese exchanges.” Indeed, its CEO, Yoshitaka Kitao, had previously criticized the bitcoin cash-bitcoin SV hard fork, largely for its being acrimonious.

And with regard to its future plans for listing new cryptocurrencies, SBIVC's spokesperson confirmed to Cointelegraph that its choice of coins largely depends on the stability of its chain and community. "SBIVC decides its listing currencies upon internal principle rules," she said. "These include market capitalization of more than JPY 500 billion, does not have prospects of noxious hard-forks, and other factors including usage, liquidity, safety and profitability."

In other words, SBIVC isn't likely to list a cryptocurrency that has an imminent or near-term risk of forking, something that would presumably create complications for it and its customers. And in keeping with this ethos, its current setup is fairly stripped down and consumer-friendly, given that customers can only trade four cryptocurrencies (soon to be three) for yen, which is achieved simply by depositing yen in their accounts and then buying a corresponding amount of crypto.

SBI in the future

SBIVC also added the ability to deposit bitcoin, ether or XRP into customer accounts in December, while it plans to add crypto withdrawals soon. This once again underlines its simplicity and its focus on retail customers who might lack specialized knowledge of crypto. However, the exchange confirmed that it is planning, in the not-too-distant future, to cater to more than the average consumer.

"After AML/CFT method and custody solution that we are planning to implement are finalized, we would like to move forward and start providing services to institutional investors."

SBI is set up extremely well as a business to provide a variety of crypto exchange services to institutional investors. Not only does it have years of experience as a banking and financial services group, but it has recently been expanding the range of crypto-related products it offers, equipping itself in the process with the infrastructure and tools to offer a sophisticated and comprehensive exchange.

In March, for example, SBI revealed that its MoneyTap payment app, which it had developed in partnership with Ripple, had received investments from 13 Japanese banks. That same month, it announced that it had established a spin-off company to manufacture mining chips, while it has invested in a number of cryptocurrency wallets and exchanges, giving it a wide grounding in almost all aspects of the burgeoning industry.

Added to these developments, CEO Yoshitaka Kitao became an executive of Ripple Labs in April, indicating that SBI and Ripple will extend their collaboration well into the future — and that SBI isn't planning on walking away from crypto anytime soon.

SBIVC's spokesperson told Cointelegraph that SBI doesn't simply want to assemble an ecosystem of interconnected crypto services. It also wants to bring its noncrypto services and infrastructure into play, doing so in a way that makes SBIVC one of the most efficient and secure exchanges in Japan.

"Prioritizing customer asset protection, the SBI Group will make use of its synergies between current businesses, such as securities and FX, to acquire new customers."

When it launched back in July 2018, SBIVC had only around 2,000 customers, making it one of the smaller Japanese exchanges. However, aside from making a profit in its first year, there are plenty of other things that indicate it could grow substantially in size in the coming months.

First of all, it belongs to an established banking group that reaped 67.3 billion yen (approximately $610 million) in profit in the fiscal year to March 31, giving it the resources to expand and grow. And related to this, it has already proven that it has the fundamentals of providing a secure and easy-to-use exchange, with a recent Nasdaq test finding that SBIVC's business model, Know Your Customer (KYC)/Anti-Money Laundering (AML) measures and exchange governance all met a high standard.

It's for such reasons that it is highly probable to expect SBIVC becoming a bigger name on the Japanese crypto-exchange scene. And while this might seem like it's mainly good news for SBI, it's also good news for crypto in general, since the involvement of one banking giant will only encourage more adoption and investment in the future.