Crypto markets are continuing to show mixed signals, with most of the top market cap coins seeing mild changes both red and green.

9190 Total views
205 Total shares
Listen to article
0:00
News
Own this piece of history

Wednesday, Jan. 9 — crypto markets are continuing to show mixed signals, with most of the top market cap coins seeing mild changes both red and green. Bitcoin (BTC) is holding justabove the $4,000 mark, as Coin360 data shows.

Top cryptocurrency Bitcoin (BTC) has been jaggedly trading sideways over the past three days, and is currently down a mild 1.4 percent on the day, trading at $4,048. Having broken the $4,000 resistance on Jan. 6, Bitcoin spiked to around $4,100, subsequently continuing to fluctuate range bound between $4,000 and $4,100.

As compared with its lower price point on the first half of its 7-day chart, Bitcoin is now up around 7.9 percent on the week. On the month, the coin is up over 12.6 percent to press time. 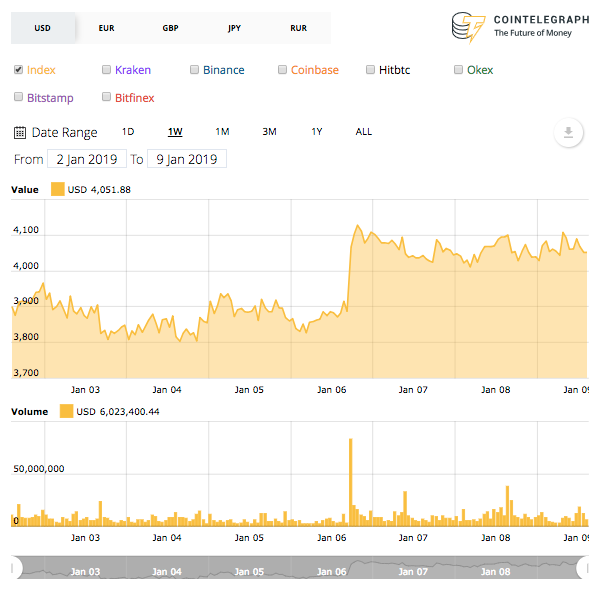 With a market cap of $15.7 billion, the asset is maintaining a slim margin ahead of second-largest altcoin by market cap Ripple (XRP), which has a market cap of nearly $15 billion at press time, according to CoinMarketCap data.

Ethereum is a strong 13.3 percent in the green on its weekly chart — and has seen an impressively bullish 59 percent in growth on the month. 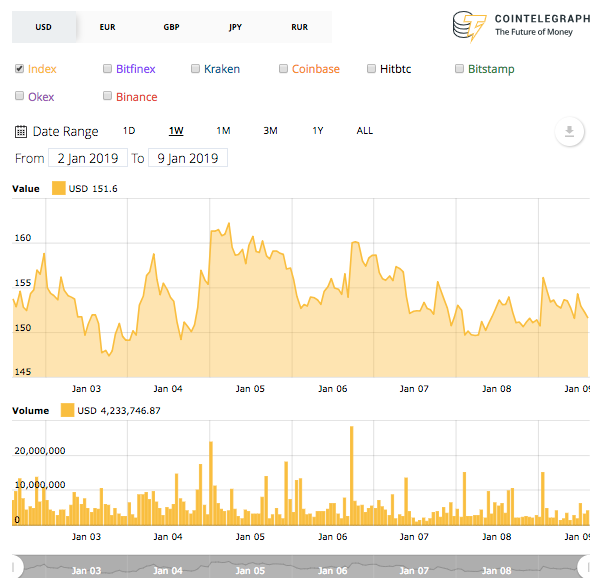 Ripple (XRP) has seen virtually no price change on the day, and is trading close to $0.36 at press time, according to CoinMarketCap data.

Having seen an intraweek high of around $0.38 on Jan. 7, and a low of $0.35 on Jan. 4, the asset has nonetheless come virtually full circle on the week, and is seeing no percentage change on its 7-day chart. On the month, Ripple is up a strong 17.6 percent.

Among the remaining top twenty coins on CoinMarketCap, more than half are in the red, with losses capped at three percent.

The only exception is Tron (TRX), which has surged 7.3 percent on the day to trade at around $0.028 at press time.

Apparently buoyed by the news, TRX has seen a consistent uptick on the week, bringing its 7-day growth to an impressive 47.3 percent. 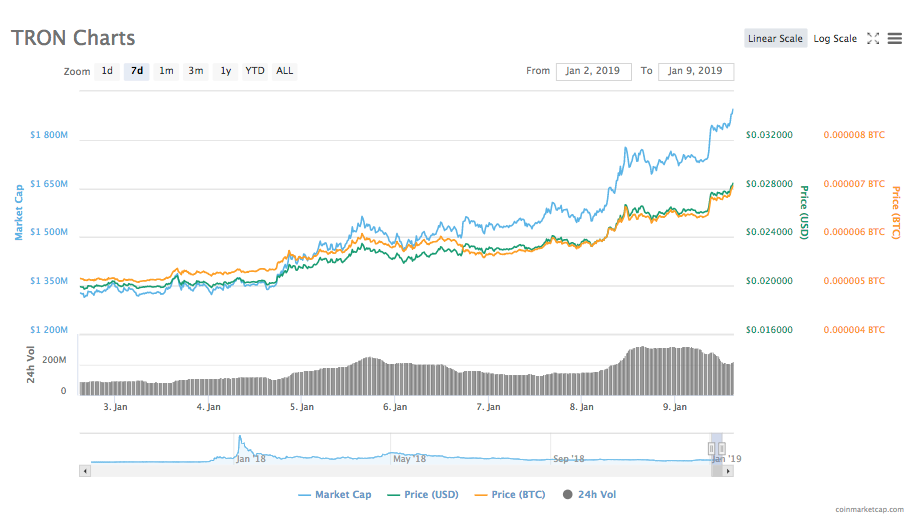 Still among the top ten, Litecoin (LTC) has seen some of the heaviest 24-hour losses, shedding over 2 percent in value to trade around $39.2. Stellar (XLM) is seeing a 2 percent loss, whereas Bitcoin Cash (BCH) and recently forked Bitcoin SV (BSV) are each down around 1.26 percent on the day.

In the context of the top twenty, losses are capped at a milder 2 percent — all coins are nonetheless in the red to press time. Native crypto exchange token Binance Coin (BNB) is down 1.2 percent to trade at $6.66; privacy-focused alt Zcash (ZEC) is down around 1.22 percent at $60.76.

Total market capitalization of all cryptocurrencies is at around $136.79 billion as of press time — up from an intraweek low of around $129 billion Jan. 4.

As reported today, the European Banking Authority (EBA) has recommended further research into cryptocurrencies in 2019, in a document focusing on the statutory applicability of European Union laws and regulations to crypto assets.

At the Israel Bitcoin Summit this week, veteran cryptographer and industry pioneer Nick Szabo made the case that in a context of mounting global geopolitical uncertainty, central banks could soon turn to cryptocurrencies to shore up their reserves. Szabo leveled his arguments against those of the head of Israel’s National Economic Council, who had opened the summit with a scathing critique of the viability of the cryptocurrency project.