Thursday, Oct. 11: markets have taken a steep downturn, even as onlookers had lately been pointing to a period of stable price action in the crypto sphere. Virtually all of the top 100 cryptocurrencies are in the red, with several top-market altcoins losing double-digits in percentage value.

Bitcoin (BTC) has shed 4 percent in value on the day, and is trading at $6,309 as of press time. Ater a strong week trading sideways to consolidate a higher price point – trading as high as almost $6,670 Oct. 8 – the top coin took a plummet earlier today, dropping over $300 in a few hours.

On its weekly chart, Bitcoin is now just over three and a half percent in the red, although it is practically breaking even on the month, remaining 0.3 percent in the green. 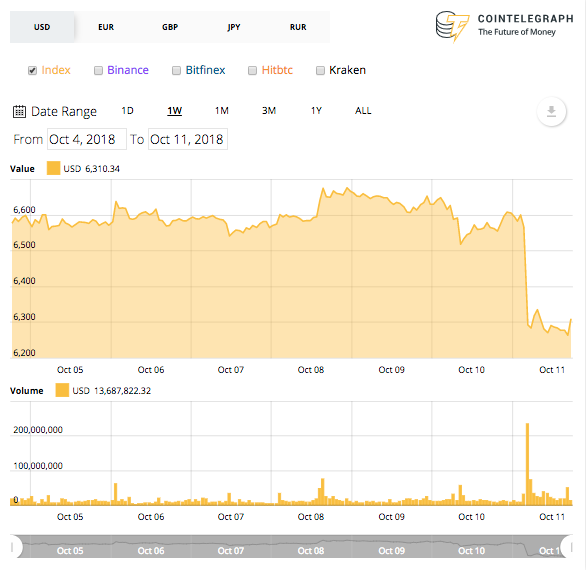 Ethereum (ETH) has fared even worse, and is down around 10 percent on the day to trade at $202 at press time. Its weekly chart shows a similarly strong consistent performance, with the altcoin circling $230 levels in recent days, ahead of today’s sudden plunge.

On the week, Ethereum is now a stark 8.3 percent in the red; monthly growth remains close to 9.5 percent. 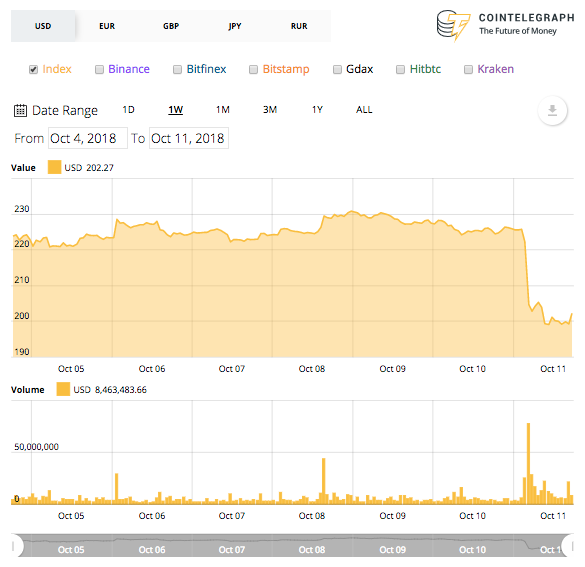 Ripple (XRP) is down over 12 percent on the day and is trading at $0.41. The asset had seen outstanding growth in September, growing so rapidly it briefly knocked Ethereum off its long-standing second spot ranking on CoinMarketCap’s listings.

However, compounding a shaky start to October, Ripple’s plummet today has brought the asset to an almost 22 percent loss on its weekly chart: on the month, it nonetheless remains up by over 57 percent. 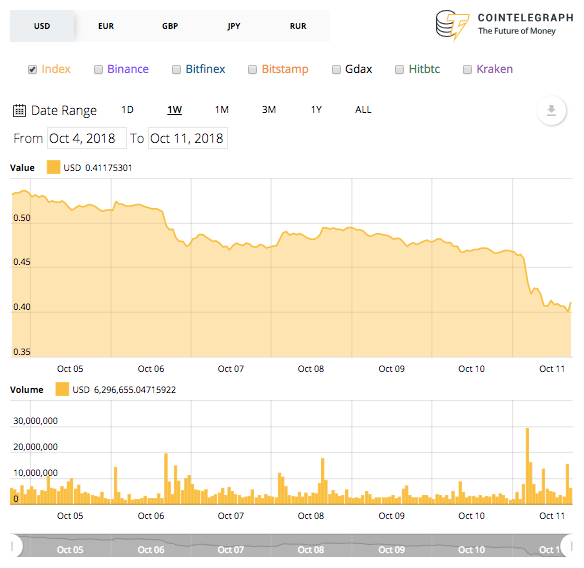 Cardano (ADA) is also pushing a 10 percent loss, and Litecoin (LTC) is down around 8.5 percent.

Total market capitalization of all cryptocurrencies is down to around $202.35 billion as of press time – down almost $20 billion from an intra-week high at around $222 billion Oct. 8.

Even as the markets decline, this week has seen reports that multiple Ivy League and other prestigious U.S. universities – including Harvard, Stanford, and MIT – have all invested in crypto funds, in what sources consider to be “a sign of the asset class’ growing acceptance among institutional investors.” Just last week, it was reported that fellow Ivy League titan Yale had also invested in a major new crypto-focused fund.

In other global crypto news, the South Korean government is said to be “likely” to announce its official position on Initial Coin Offerings (ICOs) in November, according to local reports. Korea’s government first considered re-legalizing ICOs in August 2018: the South Korean National Assembly and several government ministries have discussed introducing a potential legal framework for ICOs alongside investor protection measures.

Meanwhile, notoriously anti-crypto American economist Nouriel Roubini – a.k.a. Dr. Doom – is set to deliver a 30-page “debunking” of the industry today at a U.S. congress hearing. He will testify in counterpart to Coin Center director of research Peter Van Valkenburgh.