Markets have plunged, evidently in response to the U.S. SEC’s rejection of the Winklevoss brother’s second Bitcoin ETF application.

Crypto markets have taken a sharp downturn, today, July 27, with all of the top ten coins by market cap hit by hefty losses and Bitcoin (BTC) dipping back below the $8,000 psychological price point, as data from Coin360 shows.

The grim market picture is likely due to yesterday’s breaking news that the Winklevoss Twins’ application for a Bitcoin exchange-traded fund (ETF) has now been rejected for a second time by the U.S. Securities and Exchange Commission (SEC). 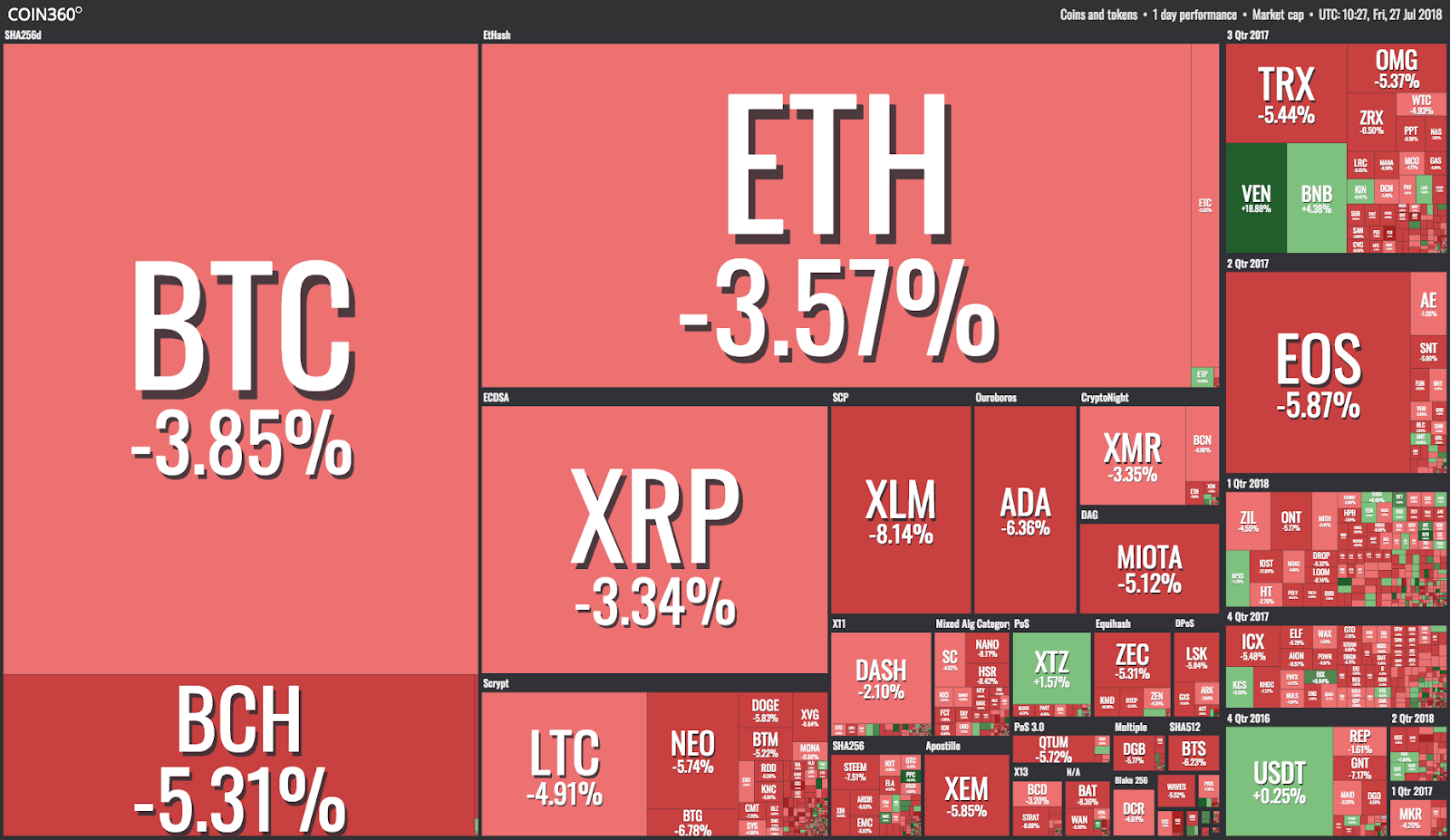 Bitcoin (BTC) is trading around $7,915 to press time, down about 4 percent on the day. After leading last week’s impressive market uptick and hitting as high as $8,431 July 25, the coin tumbled over $400 within the space of 3 hours earlier today.

Bitcoin has since slightly recovered from its intraday low at around $7,874 — and its weekly and monthly price performance remains in the green, up around 6 and 30 percent respectively. 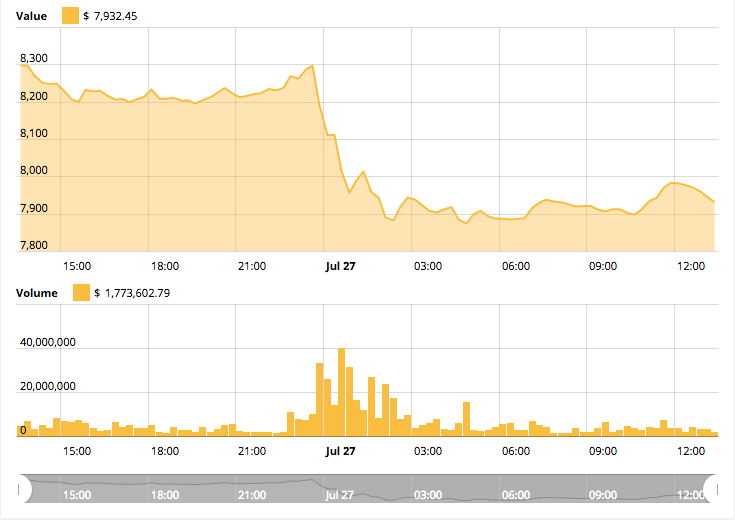 Ethereum (ETH) is trading around $462 at press time, down about 3 percent on the day. The altcoin took a similarly sharp plunge to Bitcoin, losing roughly $20 in value within 3 hours, and later dipping yet further to see a 24-hour low of around $459. Ethereum’s weekly price performance is now just shy of half a percent in the negative, but it’s monthly gains remain at a firm 6 percent. 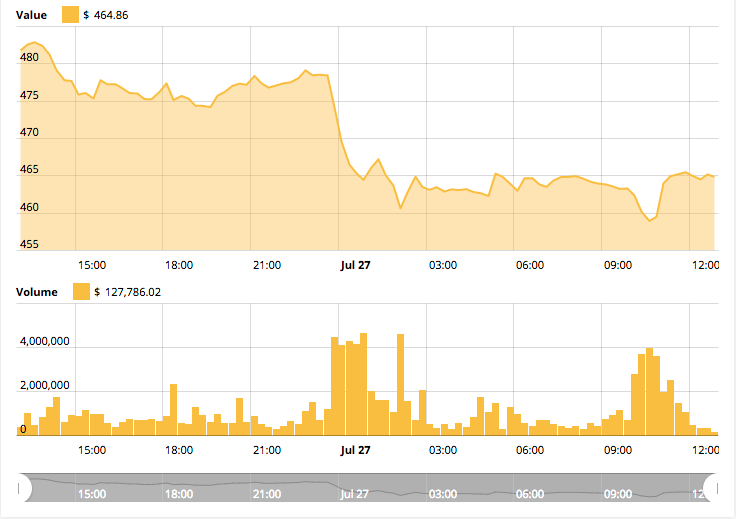 On CoinMarketCap’s listings, all of the top 10 coins by market cap are down between 3 and 7 percent on the day.

Of the top 20 coins on CoinMarketCap, VeChain — ranked 18th by market cap — has somehow been immunized from the declining fortunes of most crypto assets on the day. After a major surge yesterday to hit as high as $2.66, the token is still up around 13.5 percent today and is trading at around $2.36 to press time. 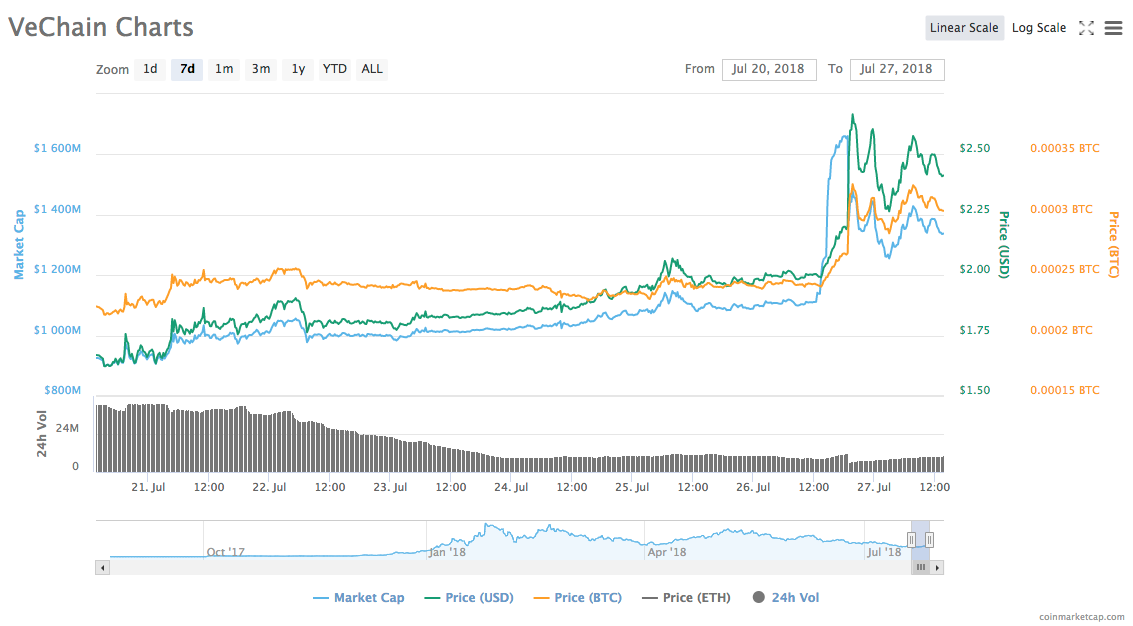 Crypto exchange Binance’s native token Binance Coin (BNB) — ranked 17th on CoinMarketCap — is also up a solid 6 percent on the day, trading around $13.81 to press time — its highest price point yet during its bullish run this week. 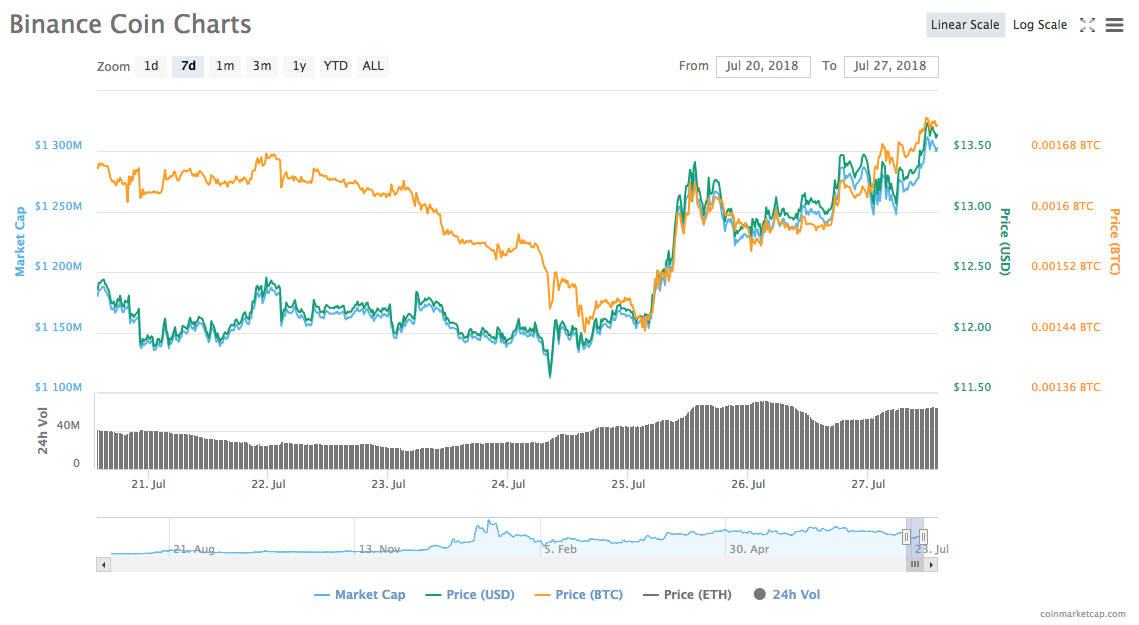 Over $12 billion has been wiped from the total market capitalization of all cryptocurrencies on the day. After yesterday’s peak at $303.7 billion, total market cap is now around $290 billion.

Of the top 100 cryptocurrencies by market cap, just seven coins are in the green on the day to press time, according to CoinMarketCap.

Crypto entrepreneur Charlie Shrem has argued on Twitter yesterday that the SEC’s second rejection of the Winklevoss Bitcoin ETF it is in some sense “old news.” He stated that a pending decision over the Bitcoin ETF that has recently been filed by VanEck & SolidX for trading on the Chicago Board Options Exchange (CBOE) will be more pivotal for the industry — and would likely generate more price-impactful “ETF excitement.”

Shrem moreover argued that regulators will be more likely to grant a stalwart mainstream institution such as CBOE the right to trade an ETF, and that this was a more decisive factor in the Winklevoss rejection than the SEC’s alleged qualms over inadequate “resistance to price manipulation” yesterday. In response to Shrem’s argument, other commentators have nuanced his perspective, saying that:

“The VanEck SolidX Bitcoin Trust ($XBTC) will trade on the CBOE. Its pricing relies on the MVIS Bitcoin OTC Index, not a [single crypto] exchange like Gemini. It seems like the SEC would have to deem OTC markets as having better investor protections and liquidity. More investigation is required.”

Other simply consider that the SEC’s broadcasting of its concerns over vulnerabilities to market manipulation in an insufficiently sized regulated derivatives (futures) market will be “hard to overcome” — it appears that these fears have been borne out by markets, at least in the immediate-short term.

Meanwhile, on July 24 the SEC delayed its decision on a Bitcoin ETF application from investment firm Direxion, the same day as digital asset manager Bitwise filed its own application with the regulator for an ETF that would track an index of ten cryptocurrencies.

Yesterday, the CEO of the Chicago Mercantile Exchange (CME) said the institution would not be introducing futures on cryptocurrencies other than Bitcoin anytime soon, reiterating his earlier comments that it would be “a little irresponsible” to launch altcoin futures contracts given that they are still “highly volatile and new.”