Samsung’s new smartphone will have storage for crypto private keys, and Elon Musk thinks Bitcoin has a brilliant structure.

Elon Musk, tech entrepreneur and CEO of Tesla, said this week in an interview that Bitcoin’s (BTC) structure is “quite brilliant.” Speaking to advisory services firm ARK, Musk noted that digital currency is “a far better way to transfer value than pieces of paper.” However, Musk did point out some of the downsides of crypto, namely that it is energy-intensive computationally, but added that Tesla resources could help bring about the use of sustainable energy in crypto. Last year, Musk had noted that he only owned 0.25 BTC that a friend had given him a few years before.

Ethereum (ETH) co-founder Vitalik Buterin this week took to Reddit in the spirit of transparency and shared a list of his cryptocurrency holdings. Answering an Ask Me Anything post concerning the sharing of possible conflicts of interests in Ethereum developers’ holdings, Buterin noted that he owns “Non-ethereum-ecosystem tokens” like Bitcoin Cash (BCH), Bitcoin (BTC), Dogecoin (DOGE) and Zcash (ZEC), but those makeup less than 10 percent of all of his ETH holdings. He also shared that he has significant corporate shareholdings in blockchain research and development firm Clearmatics, as well as in scalability- and privacy-focused blockchain startup Starkware.

According to a report published by California-based stablecoin startup Reserve, stablecoins are set to play a key role in the mainstream adoption of crypto technologies. The report, which was presented by a number of industry players — including Reserve, Arrington XRP Capital and Blocktower — presents an analysis of stablecoins that finds that their qualities can lead to the mass adoption of crypto technologies. Specifically, the research suggests that developing countries with hyperinflation will be the first to adopt such coins, and that others will follow. 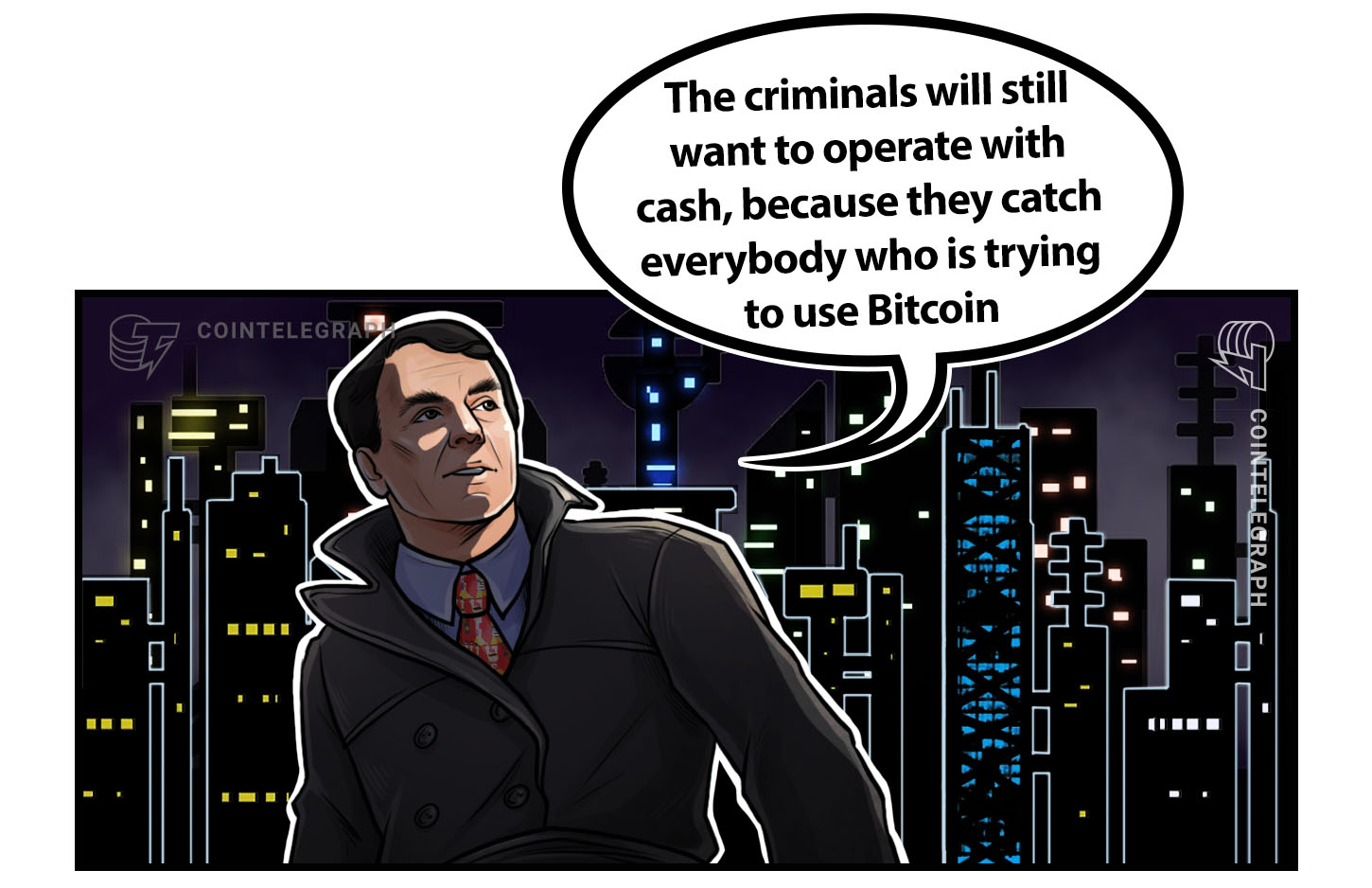 The newly exhibited Samsung smartphone, the Galaxy S10, will include storage for private cryptocurrency keys. Samsung announced the release of its new smartphone earlier this week, noting that it contains the Samsung Knox function, as well as a hardware-backed secure storage for housing private keys for blockchain-enabled mobile services. Before the release, rumors had surfaced that the smartphone could possible have a blockchain keystore with an Ethereum wallet option, but this week’s launch has no mention of these rumored features.

This week, the Supreme Court of Nova Scotia has appointed Canadian law firms Miller Thomson and Cox & Palmer to represent customers of embattled crypto exchange QuadrigaCX in future legal proceedings. The law firms will act as the lead council to represent users of the exchange, which has faced an uncertain legal future since the recent unexpected death of its founder led to an inability to retrieve customers’ funds. The counsel will be in charge of managing communications as well as acting as a liaison with monitor Ernst & Young. Also this week, the exchange sent its remaining crypto assets to the Big Four auditing firm, in order to begin figuring out reimbursement proceedings.

Despite a very positive week for the crypto market, the top 20 cryptocurrencies saw a sharp market reversal over the last 24 hours. Bitcoin is trading at around $3,823, Ethereum at $140 and Ripple at $0,30 with the total market cap around $128.6 billion at press time. The top three altcoin gainers of the week are ThoreCoin, Graphcoin and S4FE. The top three altcoin losers of the week are HondaisCoin, Crowdvilla Ownership, Vice Industry Token. 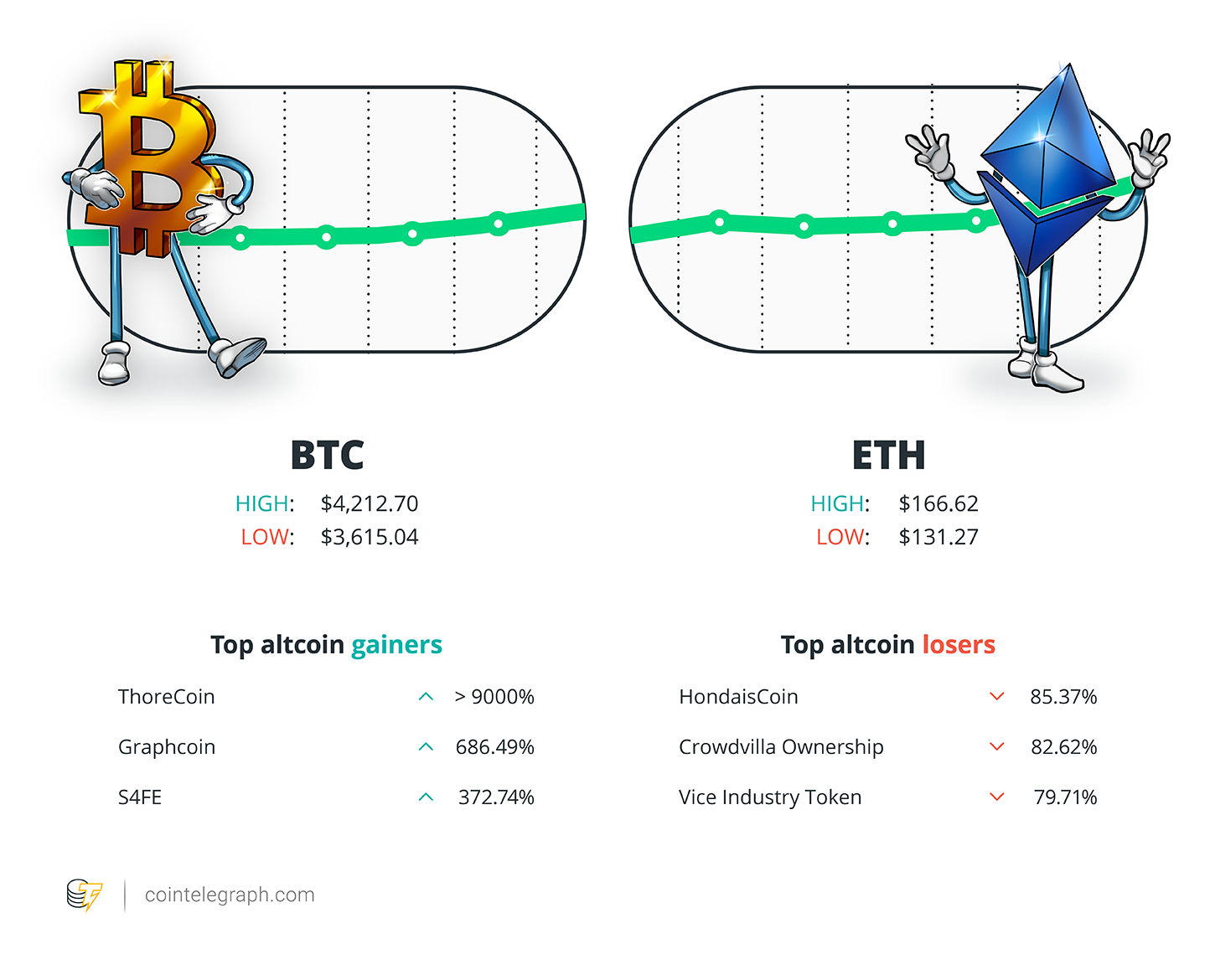 “There are lots of markets that aren’t regulated, but we nevertheless build [derivative] products on top of them.”

"Polkadot delivers what Serenity ought to be. Change my mind.”

“The criminals will still want to operate with cash, because they catch everybody who is trying to use Bitcoin.”

— Tim Draper, billionaire investor and known Bitcoin (BTC) bull, speaking about his vision of the crypto future in five years.

“I think the more interesting questions there are not feasibility in the near term, but are the philosophical questions of the goodness of a system like that one.”

“I see Bitcoin at a million dollars someday.” — Jesse Lund, vice president of blockchain and digital currencies for IBM. 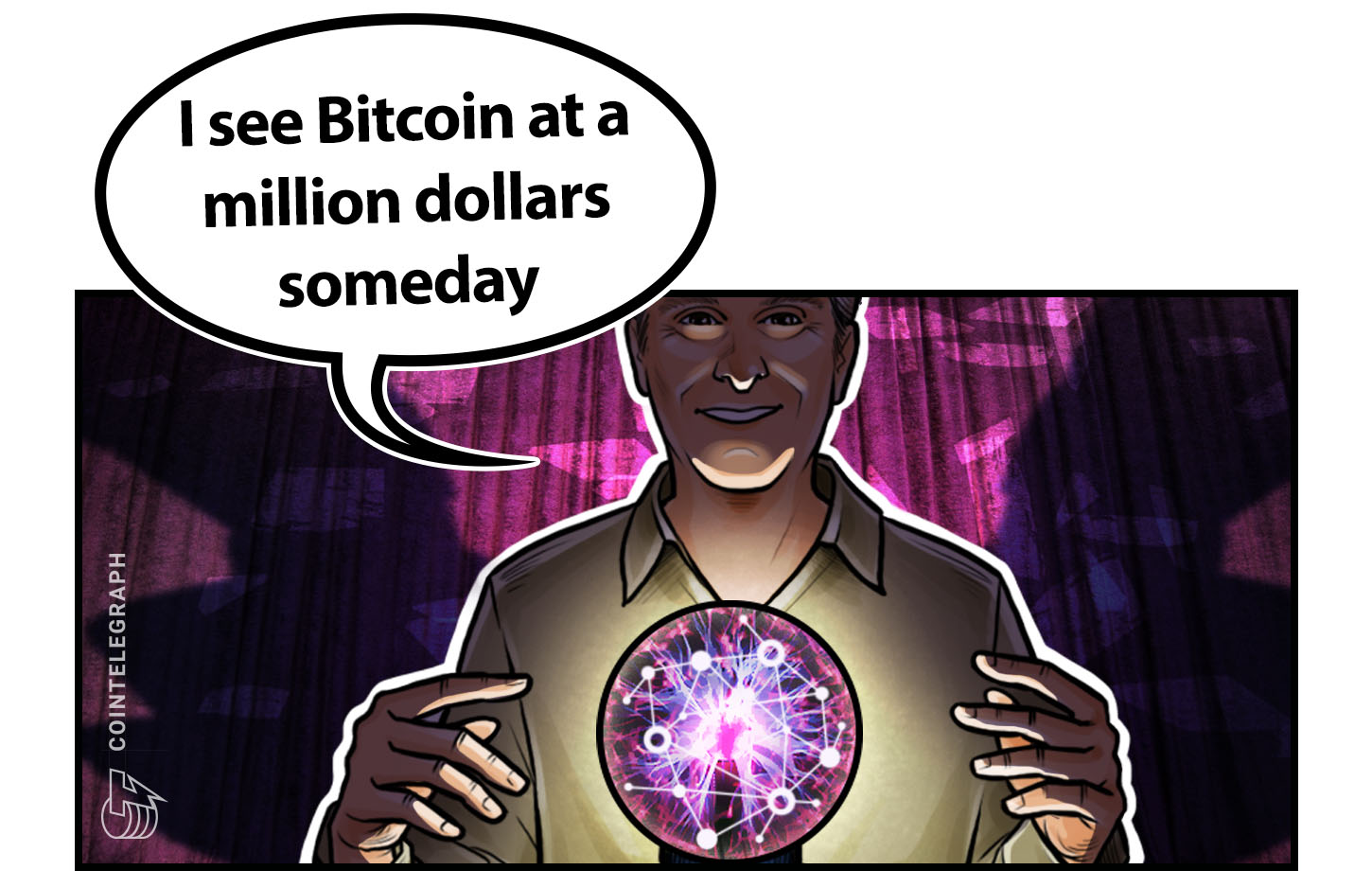 This week, law enforcement officers in Mumbai, India arrested a group of suspects reportedly involving in a cryptocurrency scam that garnered them around 1 billion rupees (around $14 million). The legal case has led to the arrest of four individuals, and the police note that they are still looking for a fifth suspect. According to the police, the suspects held meetings throughout India, promising high returns on their investment in the so-called Cashcoin, with no intention of paying back the money. The defendants’ lawyers have claimed their clients’ innocence.

Coinbase-Supported Bitcoin Debit Card to Reportedly Shut Down in April

The Shift Bitcoin debit card is reportedly set to shut down its operations in April of this year, according to a screenshot of an email purportedly from the Shift team posted on Reddit this week. The card had allowed U.S. cryptocurrency exchange Coinbase users to spend their BTC balances using a Visa debit card in select U.S. states. According to the email screenshot, the Shift team did not state a reason for the shutdown of its product, and noted that the cards will function as normal up until April 11, 2019.

An official from Spain’s central bank, the Bank of Spain (BDE), said in a new report that Bitcoin will be unable to solve the problems currently faced by traditional payment systems. BDE’s deputy general director for financial innovations and market infrastructure, Carlos Colesa gave his opinion, which is separate from the bank’s, further noting that Bitcoin’s transactions processing is too small a value for a global system and that the approval times are too slow. Colesa also notes that the lack of governance and coordination prevents improvements to the system. 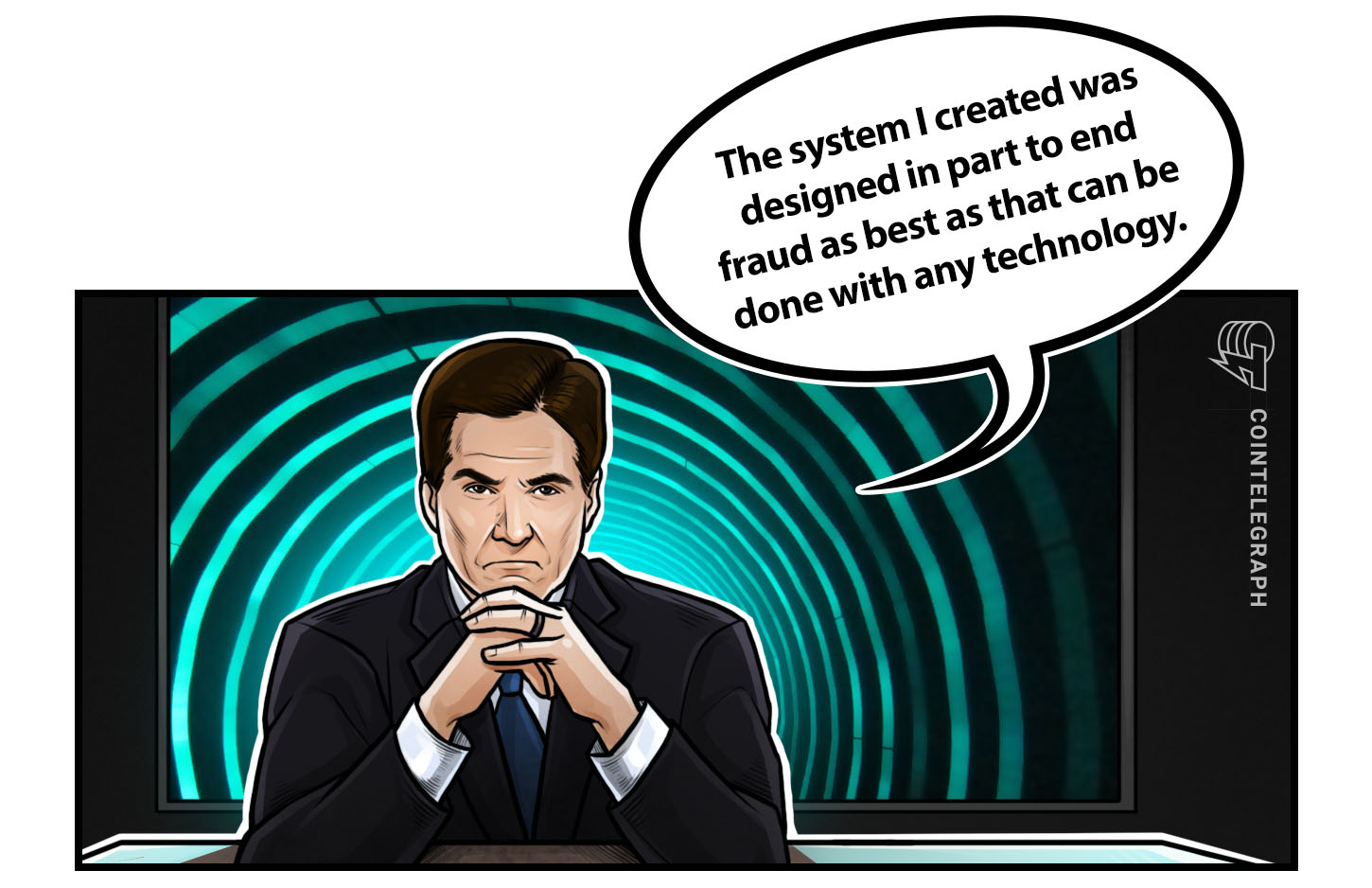 This week, Cointelegraph looks at all of the latest analyses of the cryptocurrency hacks and thefts, examining how the community and technology has evolved in response to ever-changing threats.

First Pension Funds Investing in Crypto — a Sign of Things to Come?

After two large U.S. pension funds revealed their investment in the crypto space, the community has debated whether this is a sign of growing adoption and institutional investor interest. Cointelegraph lays out how this investment could set a new precedent.

As Venezuela’s economic situation grows more and more dire, the idea that cryptocurrency — or Bitcoin, specifically — could be a competing way to store value has grown in potential. Cointelegraph’s latest analysis of Venezuela, Turkey, India, Iran and Nigeria looks for parallels and the ways in which crypto has proven to be a trustworthy store of value.