Huobi Secures Its FSA License in Japan, Other Large Players Are Pending

Cryptocurrency exchange Huobi has relaunched as a fully licensed platform in Japan after merging with BitTrade.

On Jan. 17, Singapore-based cryptocurrency exchange Huobi, one of the largest players on the market, relaunched as a fully licensed platform in Japan after merging with the BitTrade exchange.

Branching out to Japan, where compliance is valued and many regulatory measures are imposed for crypto players by domestic regulators, is a complex process. Here’s how Huobi entered the market, and which firms might soon follow suit.

Japan is one of the world’s largest markets for cryptocurrencies. Bitcoin (BTC) and altcoins can be used as a legally accepted means of payment there, although they are not considered “legal tender.” Being closely overseen by the national financial regulator, the Financial Services Agency (FSA), the Japanese crypto market is also one of the most compliant and regulation-oriented.

The FSA is known to have a tight grip on local exchanges, firmly reacting to security breaches after a number of high-profile local crypto exchange incidents, namely last year’s bizzare $532 million Coincheck hack and the infamous collapse of Tokyo-based Mt. Gox. The FSA also conducts on-site inspections of exchanges that have their registration pending and occasionally asks exchanges to submit their risk management system reports in the wake of security breaches. 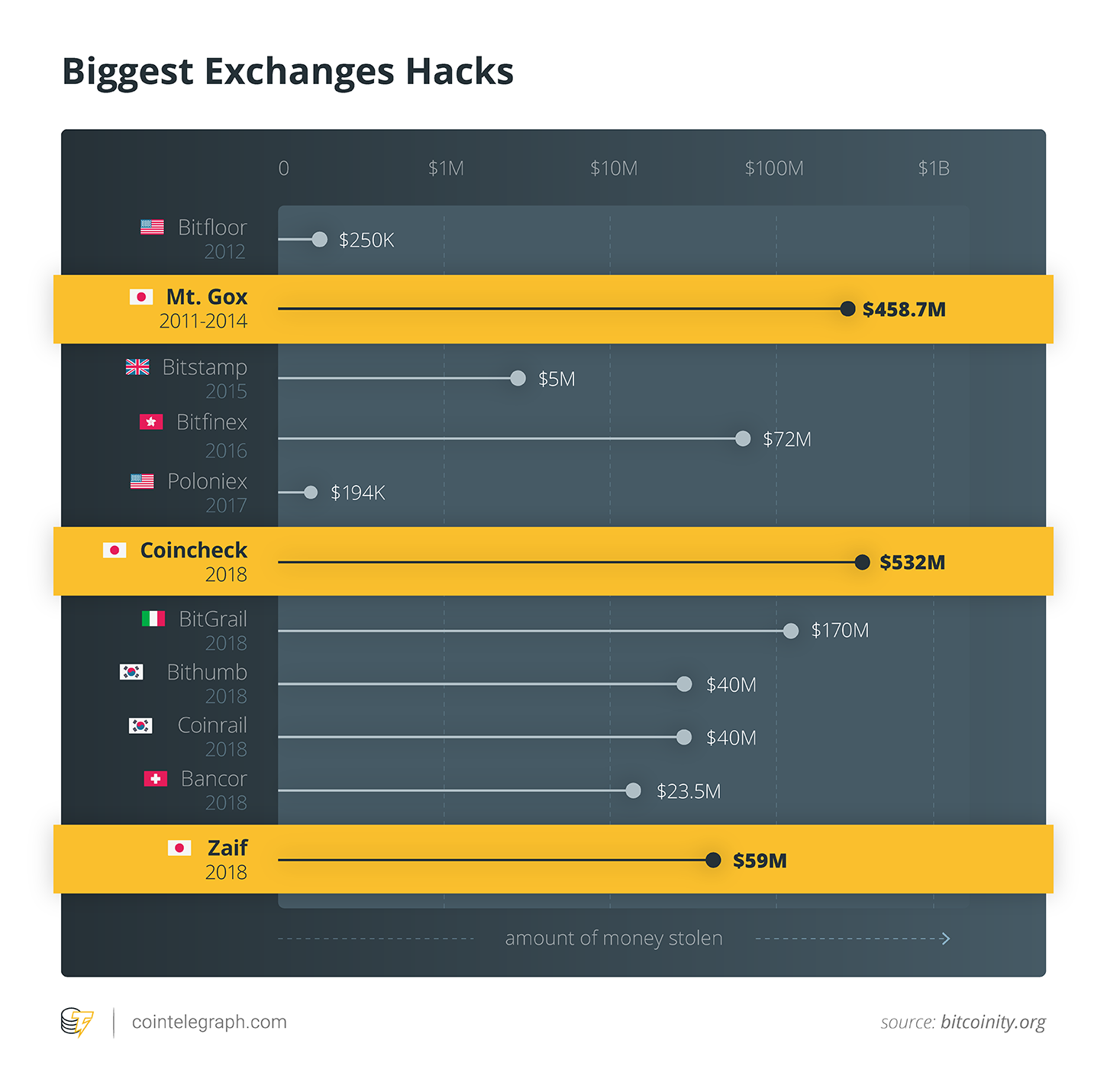 For instance, in March 2018, following the Coincheck hack, the watchdog sent “punishment notices” to as many as seven crypto exchanges and temporarily froze the activities of two more after a round of inspections. Business improvement orders were sent for a lack of “the proper and required internal control systems,” with Coincheck being specifically cited as missing a framework for preventing money laundering and the financing of terrorism. Shortly after the regulator’s move, two local exchanges — Mr. Exchange and Tokyo GateWay — decided to close up shop.

As a result of the FSA’s thorough supervision, some players have decided to quit the Japanese market. Binance, one of the world’s largest crypto exchanges that had opened an office in the country, turned to Malta — the famously crypto-friendly country — after the regulator had issued a warning in March 2018. Similarly, around the same time, crypto exchange Kraken also decided to end its services in Japan, although citing the rising costs of doing business there as the primary reason for relocation. Japanese social messaging app Line has also decided to exclude the domestic market prior to the launch of its cryptocurrency exchange, citing local regulatory difficulties.

In May of last year, the FSA rolled out further regulatory stipulations for domestic crypto exchanges, intensifying its efforts to prevent another major hack. Exchanges were required to monitor customer accounts multiple times per day for suspicious fluctuations and must comply with stricter Anti-Money Laundering (AML) measures, which specifically demand Know Your  Customer (KYC) checks, such as ID verification. There have also been reports regarding the FSA potentially prohibiting the trading of anonymity-oriented altcoins — such as Dash (DASH) and Monero (XMR) — in the future.

In July, the agency underwent a major redo aimed at improving its presence in fintech-related fields, including cryptocurrencies. Thus, the Strategy Development and Management Bureau replaced the Inspection Bureau to develop a financial strategy policy and handle issues addressing the digital currencies market, fintech and money laundering.

The Policy and Markets Bureau, in turn, succeeded the Planning and Coordination Bureau, and was tasked with developing a legal framework that addresses the rapid growth of the fintech sector.

In August 2018, Toshihide Endo, the commissioner of the FSA, said that his agency wants the cryptocurrency industry to “grow under appropriate regulation.” The official added:

“We have no intention to curb [the crypto industry] excessively. We would like to see it grow under appropriate regulation.”

In response to regulatory pressures, a self-regulatory body named the Japan Virtual Currency Exchange Association (JVCEA) has emerged, comprised of the local exchanges. In October 2018, Japan’s financial regulator formally granted self-regulatory status to the JVCEA to oversee the crypto sector. Therefore, the JVCEA might have a better say when it comes to the industry standards in the future. Specifically, the self-regulatory outfit is now expected to develop AML policies for crypto exchanges.

Founded in China in 2013, Huobi Group has been headquartered in Singapore since Beijing’s crackdown on domestic crypto-fiat exchanges in September 2017. As part of its ongoing overseas expansion efforts, the platform has recently rebranded its United States-based strategic partner trading platform HBUS to the better recognized the Huobi name. Now, the platform — currently the world’s sixth largest by daily traded volume — has expanded to the Japanese market. Huobi’s arrival follows the news about Coincheck receiving full permission from the FSA to continue operating in the country after the above mentioned security breach.

Importantly, Huobi didn’t receive the FSA license from scratch, going through a different route instead. Although Japan’s Payment Services Act allows foreign operators to register in the country as “virtual currency exchange service providers,” Huobi has relaunched as a fully licensed platform in Japan after acquiring a majority stake in BitTrade last September. At the time, BitTrade was one of only 16 crypto exchanges in the country to have secured a license from the FSA. 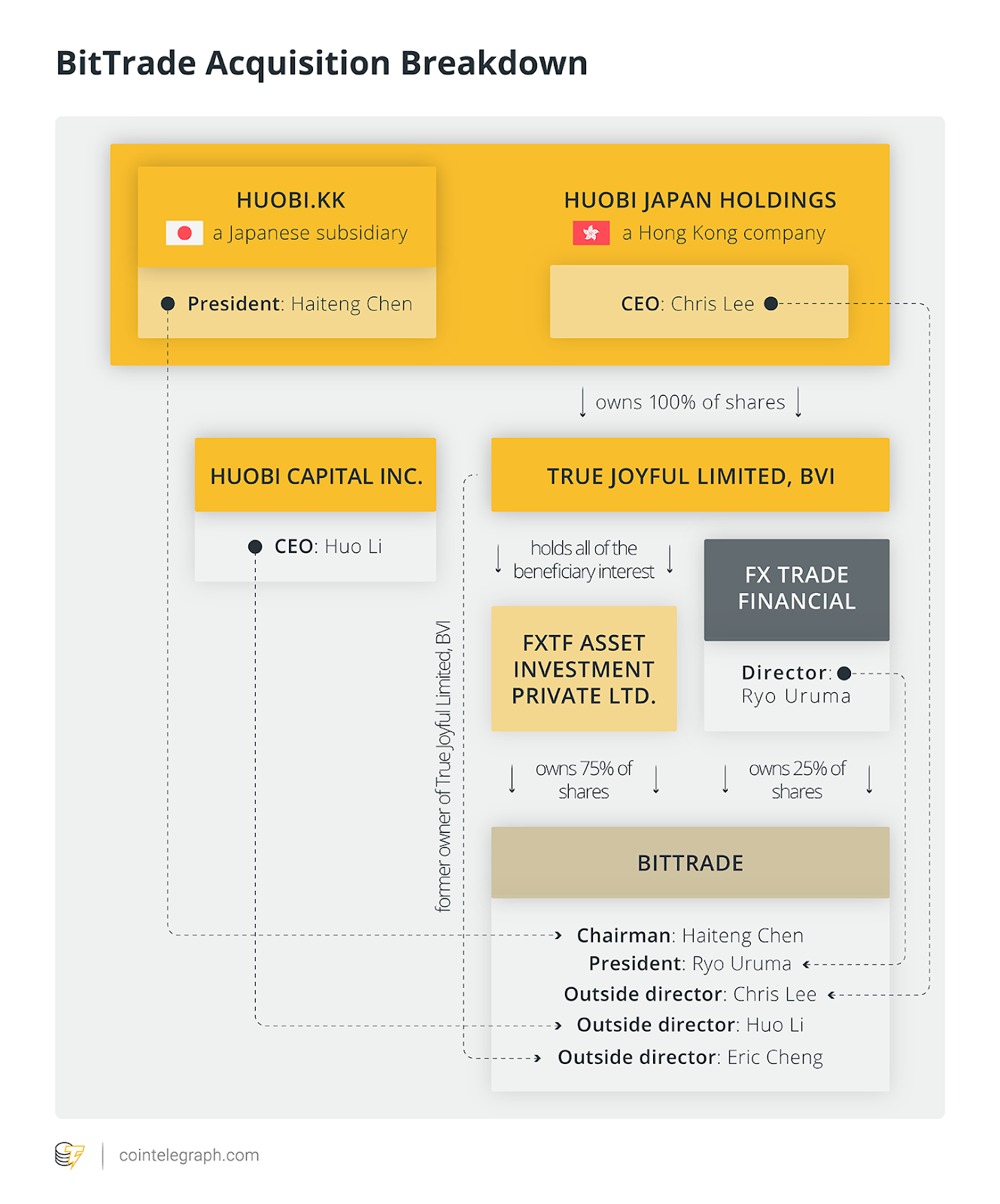 More exchanges to receive the FSA’s blessing: Coinbase, Yahoo and others

Other players are only preparing to enter the market, still waiting to get clearance from the FSA. As Cointelegraph Japan reported on Jan. 12, seven applications will be either approved or rejected by the FSA within six months. The article also revealed the FSA’s complex and lengthy routine of reviewing crypto exchanges that have applied for a license.

Thus, the FSA conducts a procedure that takes almost six months from the time of application — which includes the submission of answers to over 400 questions — to final decision.

After receiving the answers, the FSA communicates with the company to verify its business plan, governance, cybersecurity and management system, along with its AML and counter-terrorist financing measures. In that phase of the review — which reportedly takes about four months — the agency’s officers personally double-check the company’s practices in person. After that, the company officially submits their application to the FSA. The agency then finally reviews the documents and decides whether or not to grant the license.

The financial regulator stated that there are 21 companies taking part in the first part of the review as of January, while seven are already in the decision phase. Therefore, up to seven companies could be granted a new license by the summer. In total, the FSA has reportedly received around 190 cryptocurrency exchange license applications.

Perhaps the most major of the pending candidates is San Francisco-based Coinbase, which revealed its plans to enter the Japanese crypto market in June 2018. Being a compliance-oriented company, Coinbase has made positive remarks about Japan’s crypto regulatory climate in the past, saying that the FSA’s intense focus on security is “good for us.” Given that the U.S. exchange originally planned to establish its operation in Japan “within the year,” the FSA is likely to approve or decline its application at some point in the next few months.

Moreover, the Japanese arm of the internet giant Yahoo will reportedly open their own crypto exchange “in April 2019 or later,” through buying 40 percent of BitARG Exchange Tokyo. Other potential players to open a crypto exchange in Japan include Mitsubishi UFJ Financial Group, the largest domestic bank. In January 2018, South Korean newspaper KBS reported the financial group’s plans — however, there has been no update since.

Also, Money Forward, the company behind a popular financial management application that has over 7 million users in Japan, recently shared details regarding the upcoming launch of its cryptocurrency exchange. Thus, Money Forward is reportedly planning to open their yet-to-be-named platform between January and March 2019, although it depends on how the registration with the FSA will go. 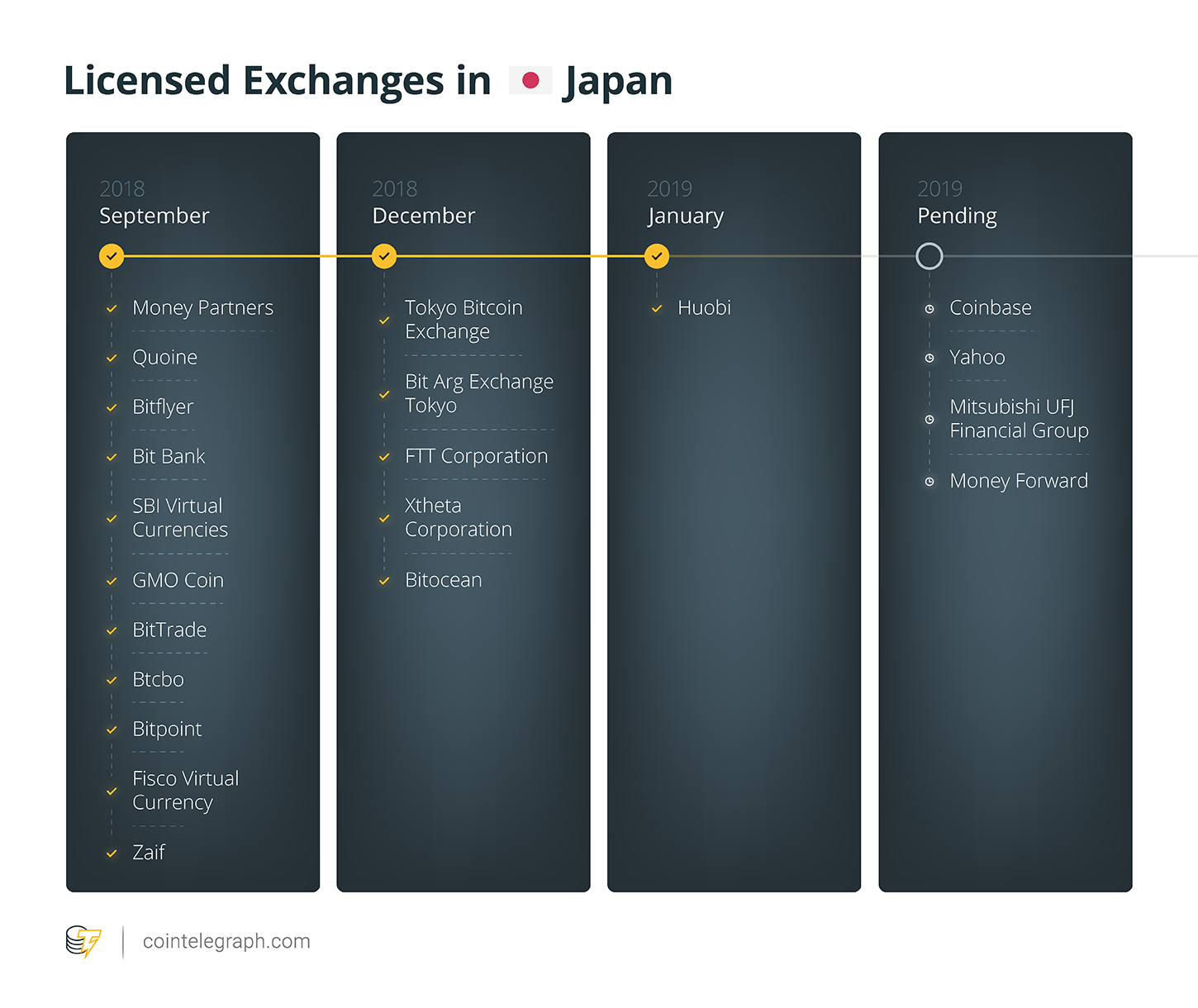