The project claims to be able to process the entire daily volume of the U.S. equities market, however, critics remain doubtful.

On Nov. 6, the post-trade market infrastructure behemoth, the Depository Trust & Clearing Corporation (DTCC), announced that it is entering the test phase of its attempt to replatform its Trade Information Warehouse (TIW) via the use of distributed ledger technology (DLT).

The move to a blockchain platform comes at a time when many financial institutions are trialling the technology. In early November, Morgan Stanley released a report updating its clients about Bitcoin and blockchain, documenting several industry giants who have either already implemented blockchain or are in the process of trialling it. The report named ING Bank, Morgan Stanley, JPMorgan, and several other as being in the various stages of trials.

The DTCC’s attempt to shift its TIW to the blockchain is an ambitious project due to the fact that it accounts for 98 percent of derivatives transactions worldwide. In the statement, the DTCC sheds light on the scale of their current operations, stating that the DTCC’s subsidiaries “processed securities transactions valued at more than U.S. $1.61 quadrillion.” The DTCC valued its current current custodian and asset servicing solutions used in 131 countries and territories at U.S. for $57.4 trillion. Furthermore, the release stated that the DTCC’s Global Trade Repository service processes around 40 million open over-the-counter (OTC) positions weekly, along with 1 billion communications monthly, through its licensed trade repositories group.

According to the press release published on Nov. 6, the DTCC is working alongside 15 of the world’s leading banks to test the DLT based replatforming of the warehouse.The press release only names the U.K.-based Barclays bank as participating in the 2018 test, leaving the remaining 14 anonymous. JPMorgan, Credit Suisse, Citi, and Bank of America were participant banks in the DTCC’s 2016 proof-of-concept (PoC), however, it is not at this point known if any are still involved in the ongoing project.

Lee Braine, of the Chief Technology Office at Barclays, explained the aims of the project in the DTCC’s press release:

“We are pleased to be working with DTCC, our partners and colleagues on this exciting project to bring distributed ledger technology to life in a demonstrable way that will enhance efficiencies and lower costs and risks for the industry.”

The press release also reveals details about the nature of the trials underway. The replatforming will involve simulated cases of interactions between systems and platforms from other infrastructure providers. It also states that the platform will be tested against MarkitServ’s new credit platform “TradeServ.”

The DTCC’s press release also sheds some light on the parties involved and indicates that the project is comprised of a consortium of IBM, Axoni, and R3. The consortium has reportedly “recorded the functionality” of the warehouse through DLT and cloud-based platforms over the last 18 months.

Having been involved in the implementation of the technology in food supply chains and agriculture, and working to unify several blockchains via the hyperledger, IBM is already an established blockchain player. The tech giant is reportedly playing an important role in the project, providing “program management, DLT expertise, and integration services.”

Axoni is also involved in a blockchain start-up. In August, it raised $32 million in a series B funding round led by Goldman Sachs and Nyca Partners, with high-profile investors such as Wells Fargo, JPMorgan, Citigroup, and Andreessen Horowitz. This latest round of investment brings Axoni’s total financing to $55 million at press time and is illustrative of the new institutional investment in both blockchain and the cryptocurrency sectors.

Greg Schvey, one of Axoni’s co-founders, elaborated on how the funding is more than just an important financial shot in the arm, but also indicative of a “deep strategic” alliance with many of the world’s major financial institutions who are actively implementing and innovating DLT themselves. As per the press release, Axoni is providing the digital ledger infrastructure and smart contract applications constructed on the Axway protocol.

R3 is an enterprise software firm comprising of over 200 members. The firm focuses on distributed database technology. The prime focus of the consortium is to develop Corda, an open-source platform designed to operate complex transactions and restrict access to transaction data in finance. The firm is acting as the solution advisor for the project.

The DTCC has been working on how to implement DLT for several years and, consequently,  the origins of this particular DLT project are found in early 2016. As previously reported by Cointelegraph, the DTCC launched a proof-of-concept along with several high-profile financial institutions such as JPMorgan and Bank of America to demonstrate that complex post-trade events could effectively be managed via DLT in a peer-to-peer network.

The DTCC published a press release documenting the timeline of the project in 2018. 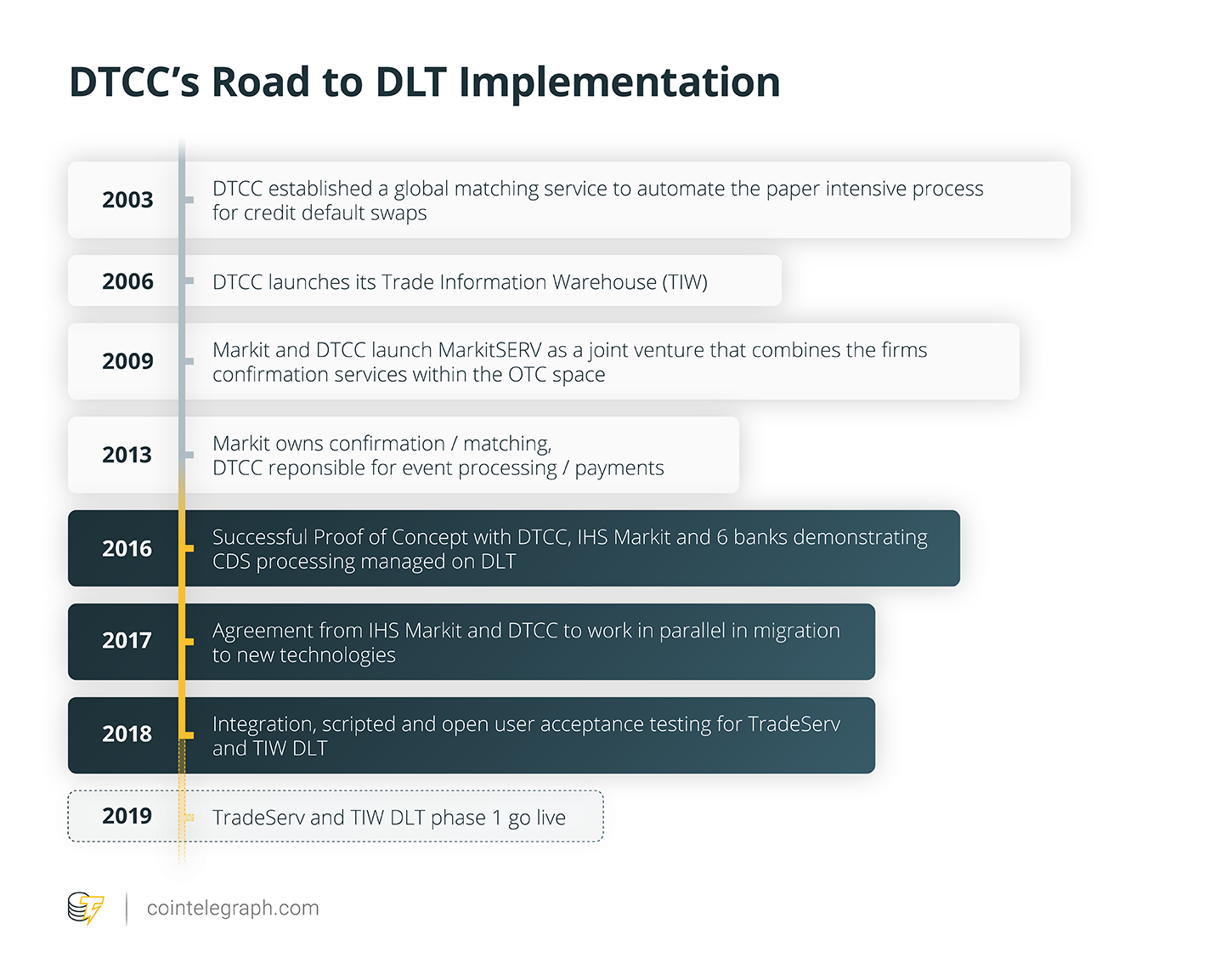 Most recently, a 19-week study led by the DTCC in collaboration with both Accenture and R3, reportedly found that DLT is scalable enough to support the high daily trade volumes of the U.S. equity market. The report claims that DLT is able to process an entire trading day’s volume at peak rates which can amount to 115,000,000 daily trades, equating to roughly 6,300 trades per second for five hours on end.

During the study, Accenture worked on the construction of a network of more than 170 nodes in order to create a realistic model of the chaotic environment of exchanges, broker-dealers, and market participants. The model then captured matched equities trades from exchange DLT nodes. Throughout the project, the DTCC acted as the central counterparty (CCP) to ensure that anonymity was upheld on the ledger.

Managing director and chief technology architect at the DTCC, Rob Palatnick, provided an update regarding the progression of the DLT replatforming:

“We finished coding the TIW. We’re just working through the typical defect list and trying to start user acceptance testing this fall.”

Palatnick also commented on other aspects of the trial that the DTCC is tackling, such as the transferral of completed contracts:

“I think there is roughly 15 to 20 million of them. A lot of them are old contracts, so they do not necessarily abide by smart contract validation rules. Figuring out the right way to get them into the ledger and have them there on day one has been one of our more interesting works in progress.”

“Generally, distributed ledger technology is not a reporting technology. Reporting and analytics are not easy on most DLT core platforms, so you need some kind of accommodation to support that.”

The DTCC also published information about the ongoing work to transform its TIW via DLT technology, such as blockchain:

“Currently, public blockchains supporting crypto-currencies operate at single or double digit per second performance, which until now was the only indication of the potential volume that a private DLT might be able to support.

“To make sure that we really demonstrated robustness and completeness, we wanted a target high enough to measure the performance and allow it to maintain that for a continuous period of time.”

With regard to the issue of scalability, Jennifer Peve, managing director of business development and fintech strategy at the DTCC outlined to Forbes that the project required venturing into uncharted territory:

“The reality is that for the private distributed ledger, there wasn’t a known performance or scalability figure, all we had to go on was public blockchains for Bitcoin performance, and that is not an apple to apple comparison. Private blockchains are fit for purpose for our industry. They have very different architecture, different privacy and sharing models, data storage, smart contract functionality, and governance model. There are a number of factors that go into performance and scalability of a distributed ledger."

Peve went on to state that the increased scalability rate was beyond initial expectations and helped build confidence in DLT.

Murray Pozmanter, head of clearing agency services at the DTCC was also bullish on DLT and the potential benefits for the infrastructure that it could bring:

“We are excited to lead this important work to advance the performance capabilities of DLT and help create new possibilities for leveraging the technology more broadly across financial markets. As an early adopter of DLT, we are encouraged by the results of the study because they prove that the technology’s performance can scale to meet the needs of markets of different sizes and maturity.”

In spite of an outpouring of positivity from all parties involved in the platform upgrade and the DLT tests, it’s important to note that the DTCC said the study only tested basic functionality. The infrastructure giant also added that future testing must be carried out in order to establish whether DLT is able to meet all security and operational requirements as well as comply with necessary regulatory requirements.

On Oct. 16, a report compiled by consulting and technology services provider Capgemini, along with the French bank BNP Paribas, purportedly revealed findings showing that DLT is not yet able to meet financial market demands. The report was compiled using multiple criteria such as industry governance, infrastructure and demographics and made use of interview material with company executives.

The report shows that 85.9 percent of participants felt that a lack of interoperability was a significant barrier to progress, whereas 83.1 percent voiced concern over the muddled regulatory environment, one of the most consistent stumbling blocks for both blockchain and crypto projects irrespective of size or financial backing. A further 77.8 percent cited scalability as an issue. More than 60 percent of participants said that security, cost, and time-efficiency constituted problems.

A problem highlighted in the report is the uncertain and inconsistent state of regulation in most countries. There is no existing uniform legal framework for regulating DLT and, consequently, the report highlights this as a major impediment to any future development.

Is there enough blockchain?

The October report is not the first time that DLT projects have faced opposition. In March, Reuters reported on how, in spite of bullish advocacy, the DTCC had not done much with blockchain technology.

The article reveals that a previous DLT-based project initiated by the DTCC was not carried out in its entirety. An attempt to transfer a system for clearing and settlement of repurchase agreement transactions was shelved after its initially successful testing due to the fact that the trial showed current technology could achieve the same results more affordably. The trial was subsequently described as “a solution in search of a problem” by the DTCC’s head of clearing agency service, Murray Pozmanter.

Tim Swanson, founder of technology advisory Post Oak Labs, commented on how the DTCC’s ill-fated project was part of a series of hotly-touted proofs-of-concepts that failed to deliver the goods:

“A large part of the problem has been expectation management, or rather lack thereof by many vendors and large consultancies that made claims that could not be fulfilled in the time spans they had said on stage at fintech events.”

In spite of this setback, the next phase of DTCC’s TIW replatforming is expected to be rolled out in Q1 2019. Currently, the Australia Securities Exchange is the sole stock exchange to have shifted its market infrastructure to blockchain. Alongside the recent institutional investment trend for Bitcoin and trials being carried out by major financial financial institutions to implement blockchain, the results of the transformation of “Wall Street’s bookkeeper” will be closely watched. If all obstacles are overcome and the project is indeed capable of processing the enormous daily volume of the U.S. equities market, then it could well become the litmus test for other ambitious projects seeking to push for further adoption by the financial mainstream.