On the 10th anniversary of the Bitcoin white paper, markets are seeing stability: Bitcoin is trading sideways and other major coins see gentle growth of below 2 percent.

Wednesday, Oct. 31: after a couple of days of mild losses, crypto markets have today stabilized, with most of the top twenty cryptocurrencies by market cap seeing slight fluctuations capped within a 2 percent range. 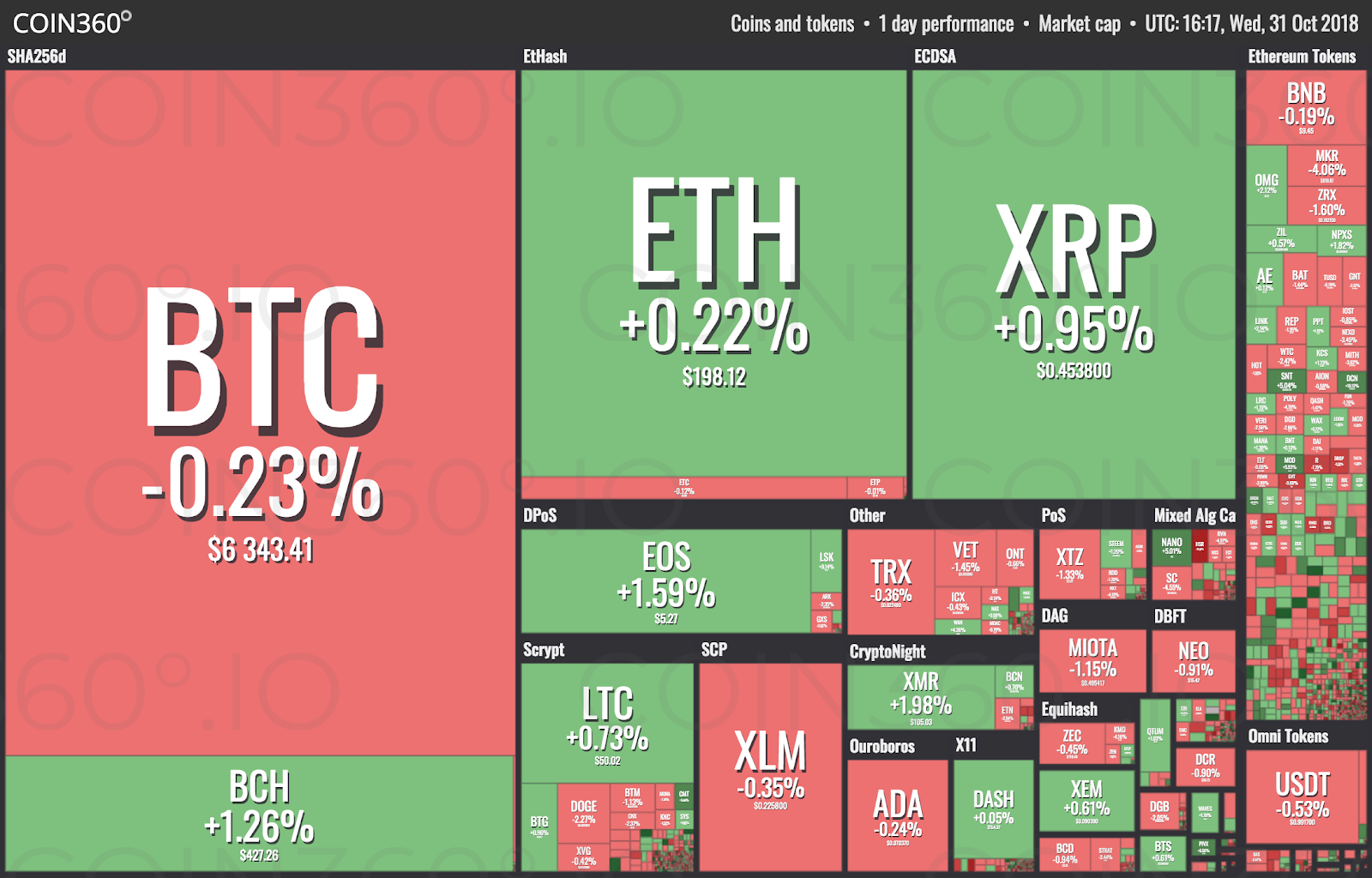 On the 10th anniversary of the publication of its white paper on Oct. 31, 2008, Bitcoin (BTC) is today up under one percent, trading just above $6,300 at press time. Before sustaining mild losses Oct. 29-31, Bitcoin had been trading within a tightly range bound between $6,400-$6,500, prompting multiple crypto sphere commentators to remark on its new quasi stablecoin-like trading patterns.

Earlier this month, the top coin sealed a 17-month low volatility rate, recording its highest level of stability since mid-2017: the trend continued before this week’s minor stirrings.

Bitcoin’s first ever recorded trading price was March 17, 2010, on the now-defunct platform bitcoinmarket.com, at a value of $0.003: the crypto has sealed 209,999,900 percent growth since then to press time.

On the week, Bitcoin is around 1.8 percent in the red, with monthly losses at around 4.65 percent. 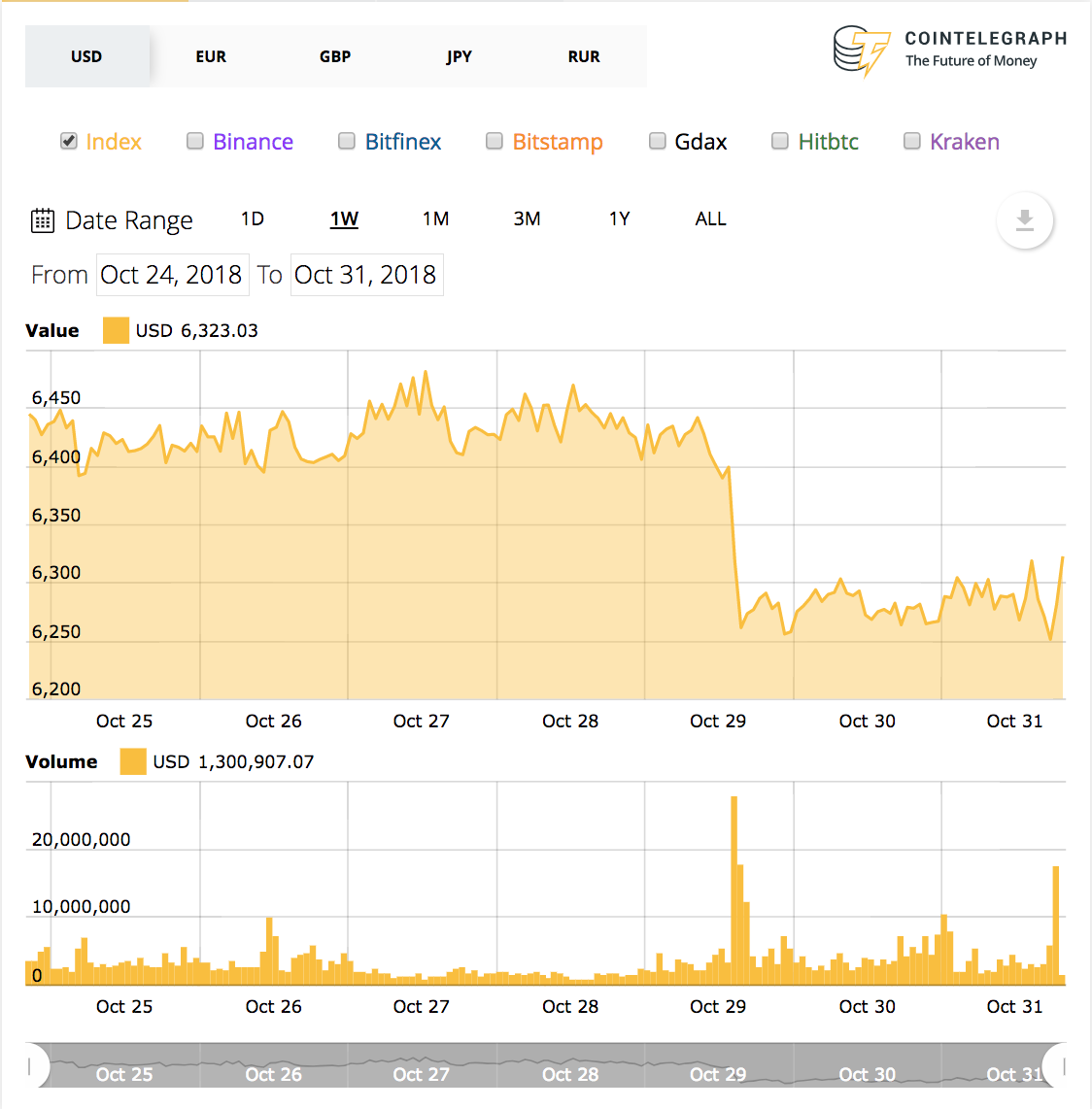 Ethereum (ETH) is also up just slightly, seeing 1.4 percent growth on the day to trade at $196, having correlated closely with Bitcoin’s trading patterns throughout the week. Until Oct. 29, the leading altcoin was holding close to the $200-$210 mark, before dropping to $192, then trading sideways at a lower price point this week.

On its weekly chart, Ethereum is around 2 percent in the red; monthly losses are at a stark 15 percent. 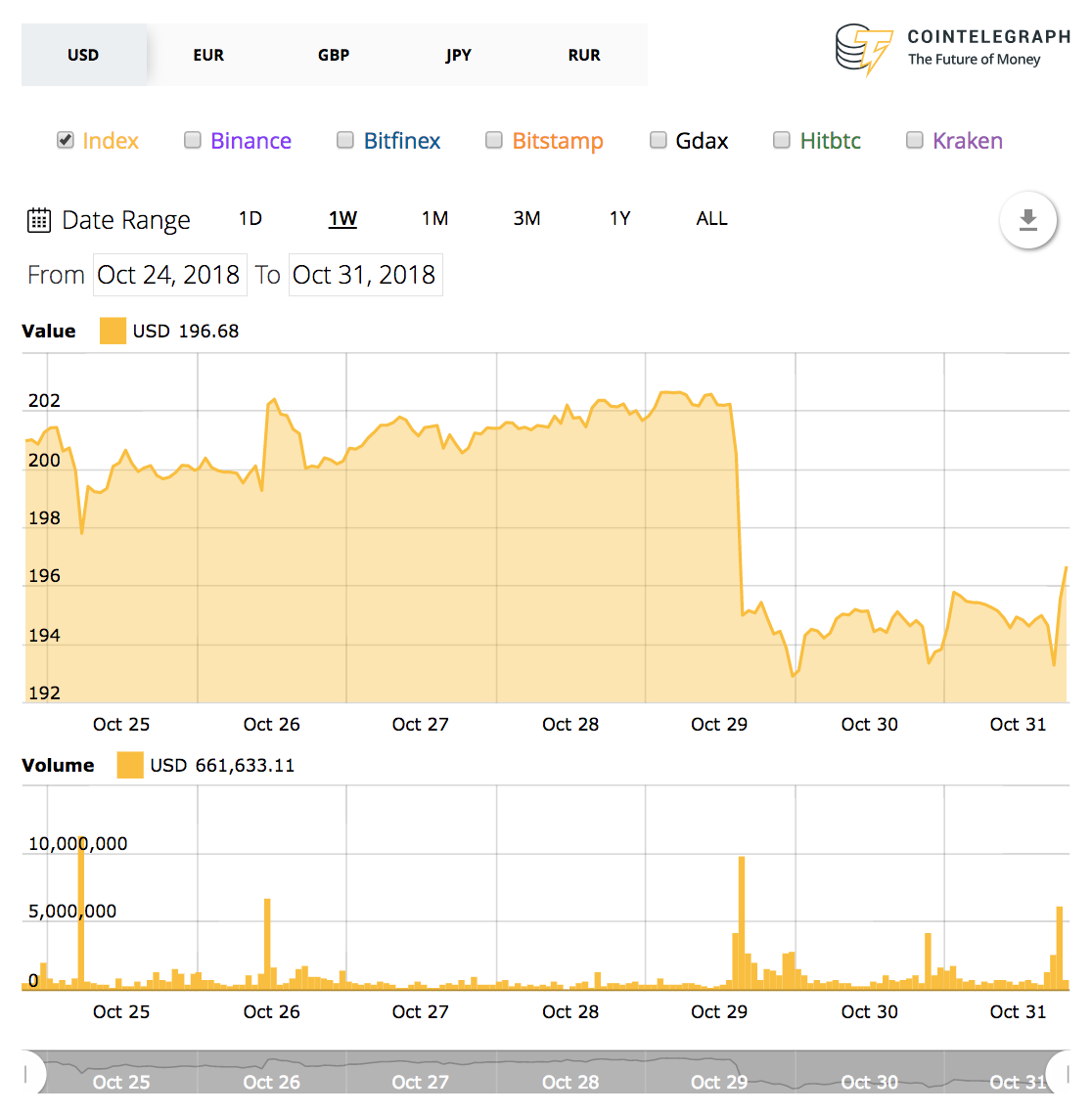 The coin’s price remains in the lower ranger after dropping Monday, despite big headlines for the Ethereum network since. On Oct. 30, “Big Four” auditor Ernst and Young launched the prototype of an enterprise-focused system that enables secure and private transactions to take place on the Ethereum public blockchain, using zero-knowledge proof (ZKP) technology.

During the Ethereum’s annual Devcon conference today, the co-author of the ERC-20 token standard introduced a new model for Initial Coin Offerings (ICO), dubbed a “reversible ICO” (RICO). The new fundraising model allows investors to return their tokens – and be reimbursed – at any stage of the project, via a special-purpose smart contract.

The remaining top ten coins on CoinMarketCap are mostly just inching into green, with the strongest growth sealed by anonymity-oriented alt Monero (XMR), up 2.42 percent to trade at $104.15. Stellar (XLM), down just 0.65 percent at $0.222, has been the hardest hit of any top-ten coin.

In the context of the top twenty coins, volatiltiy is also low, with coins seeing a mix of red and green, almost all bound under 2 percent. VeChain (VEC), ranked 20th, is seeing the most change over the past 24 hours, up 2.6 percent. With markedly little price momentum all round, 19th largest crypto Zcash (ZEC) has seen the largest losses on the day to press time, down 1.49 percent.

Total market capitalization of all cryptocurrencies is around $203.3 billion as of press time, down from around $210 billion – a mark it held for about two weeks prior – since the markets tipped downwards Oct. 29. 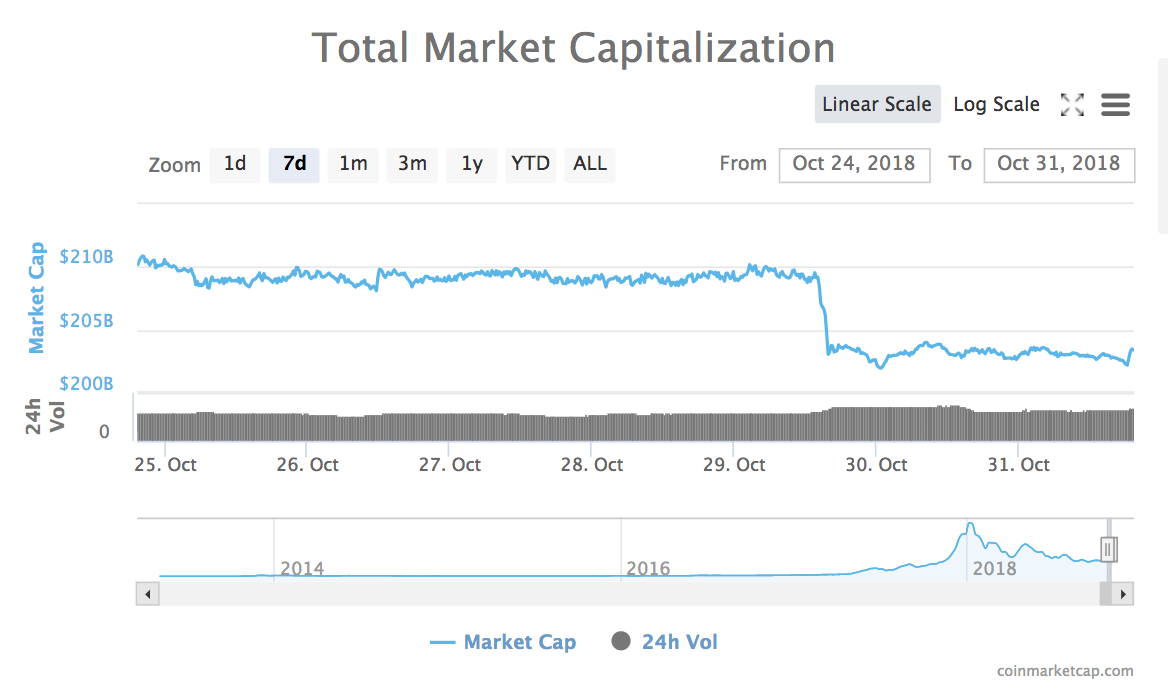 In other major crypto news today, the chairman of South Korea's Financial Services Commission (FSC) has affirmed that crypto exchanges should face no issues with banks issuing them so-called virtual accounts, as long as their anti-money-laundering (AML) know-your-customer (KYC) measures are adequate.

In the U.S., the president of major cryptocurrency exchange and wallet provider Coinbase has denied recent IPO rumors and indicated that the platform aims to support around 200-300 coins within the “next year or so,” though more likely to customers outside of the country.