The Chicago Board Options Exchange’s (CBOE) BZX Equity Exchange has withdrawn its request for a rule change from the United States Securities and Exchange Commission (SEC) in order to list its Bitcoin (BTC) exchange-traded fund (ETF). A CBOE spokesperson told Cointelegraph that U.S. government shutdown was the reason for the withdrawal, as the end of the review period is approaching with no government agencies able to operate fully. The CBOE will instead re-submit the filing for an ETF — which was backed by investment firm VanEck and financial services company SolidX — at a later date.

According to new research from the Bank of International Settlements (BIS), Bitcoin’s problems can only be solved if the cryptocurrency departs from a proof-of-work system. The BIS research states that once Bitcoin’s block rewards fall to zero, the resulting transaction fees will not be sufficient to sustain mining expenses. While the study does not the existence of second-layer solutions like the Lightning Network, it notes that the only true remedy is a complete departure from proof-of-work to avoid an unusable network slowdown. 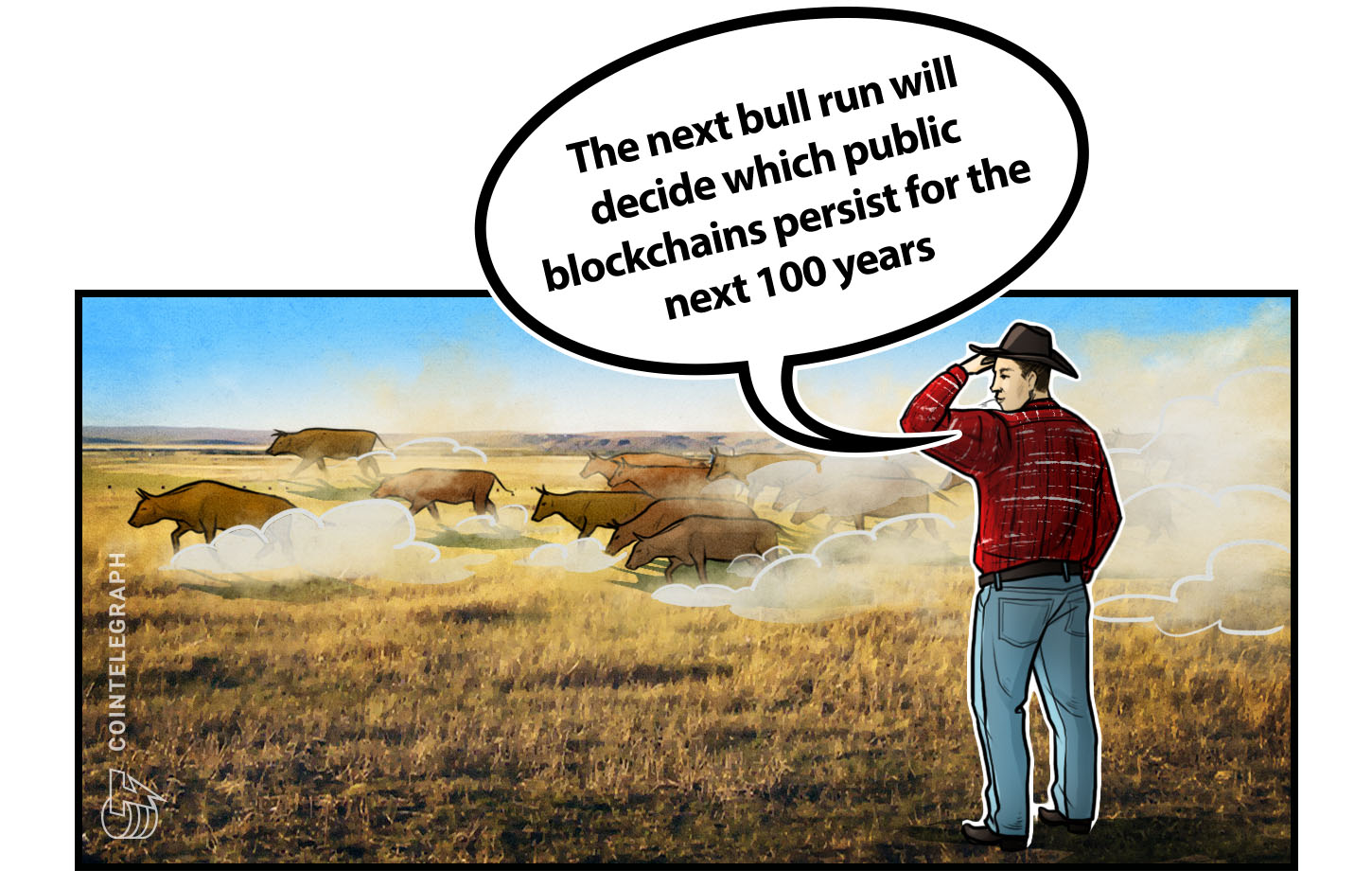 The state of Wyoming has introduced a bill that will both define cryptocurrency assets, as well as allow banks to provide custodial services for cryptocurrencies. According to the legislation, crypto assets would be placed into one of three categories — digital consumer assets, digital securities and virtual currencies — which means they would be defined as intangible personal property, granting virtual currencies the same treatment as money. Banks that provide 60 days written notice to the commissioner will be able to service as qualified custodians for digital assets if the bill passes.

Crypto entrepreneur and advocate John McAfee claims that he has fled the country this week in order to escape an indictment by the U.S. Internal Revenue Service (IRS), and will be conducting his 2020 presidential campaign from a boat in international waters. According to McAfee, a grand jury had been convened against him by the IRS. McAfee also added that he has not paid U.S. taxes for eight years, speaking already from a boat in an unknown location from which he will use proxies to conduct his campaign.

Blockchain Exchange Alliance, a Singapore-based holding firm that has a controlling stake in crypto exchange Bithumb, is looking to acquire a publicly traded company in the U.S. According to media reports, Blockchain Industries — a publicly traded company — has signed a binding letter of intent with the Blockchain Exchange Alliance, which would in effect be the first instance of a crypto exchange going public if the reverse merge proves to be successful. An unnamed source added that the combined company plans to eventually “uplist” from the OTC markets to the New York Stock Exchange or Nasdaq.

The crypto markets are slightly down at the end of the week, with Bitcoin trading at around $3,581, Ripple at $0.31 and Ethereum about $115. Total market cap is around $119 billion. 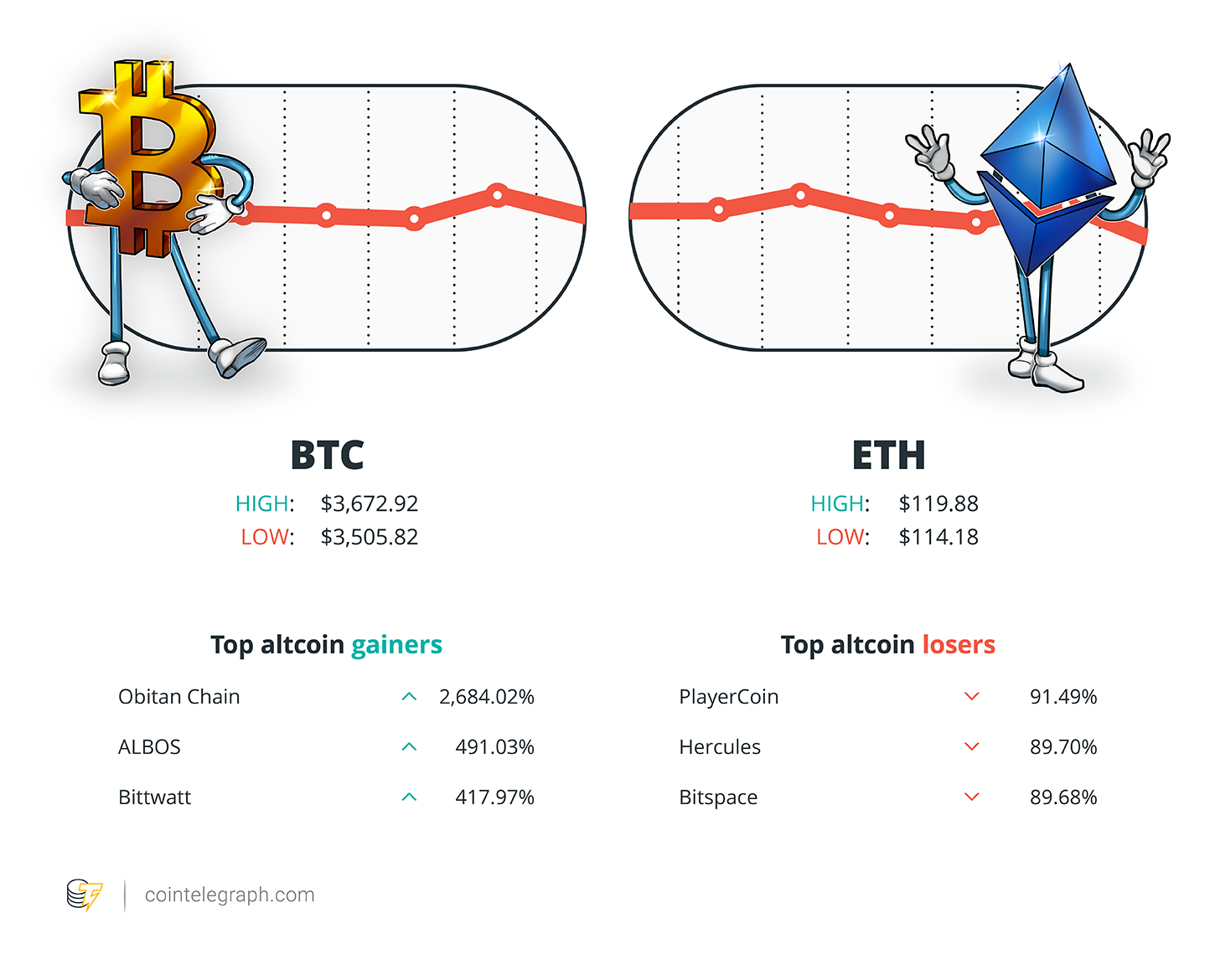 “The next bull run will decide which public blockchains persist for the next 100 years. I believe Bitcoin is currently the *only* sure thing,” — Alistair Milne, United Kingdom-based investor and entrepreneur 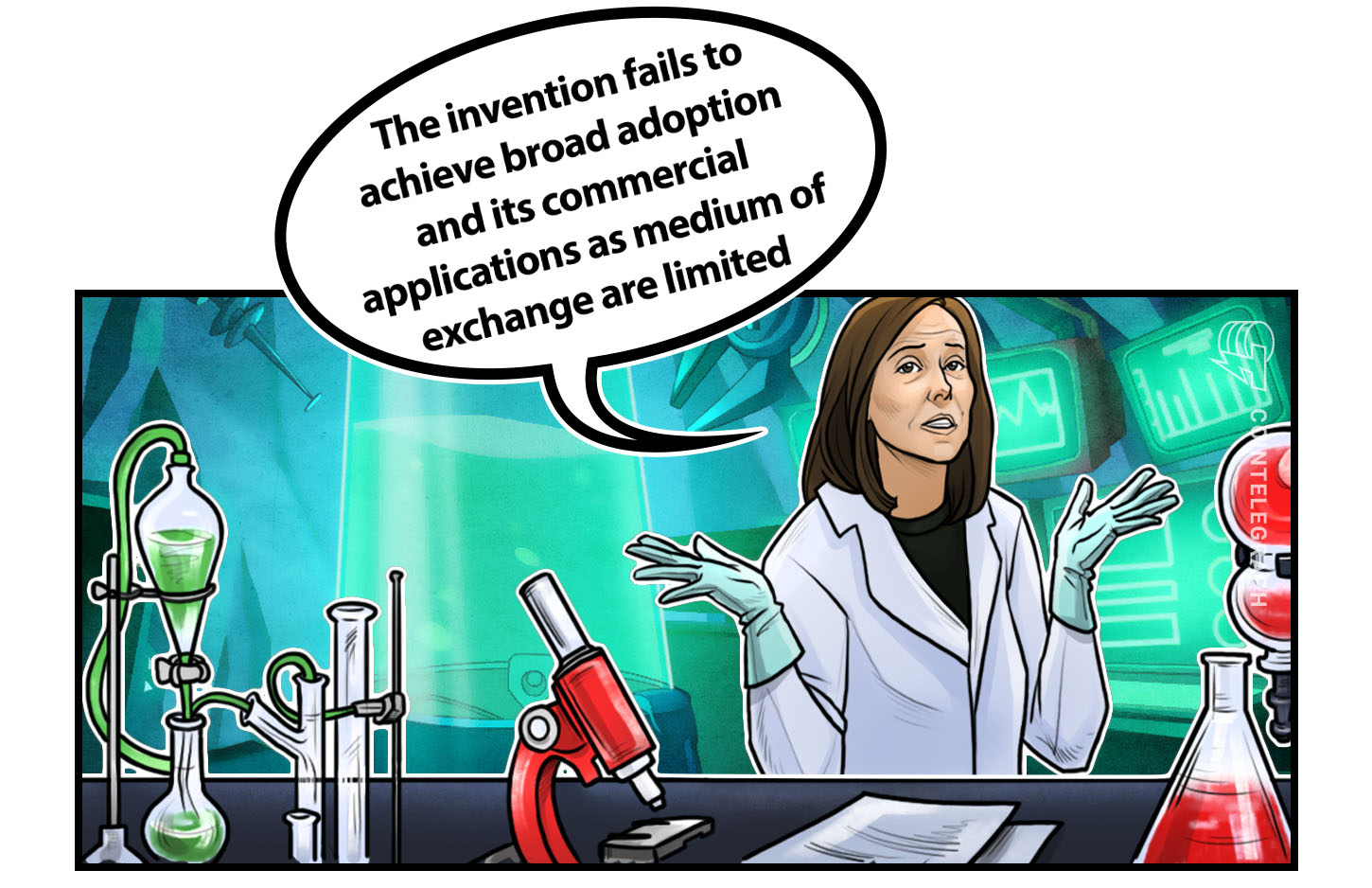 “Institutional investors are pretty picky. They're very intelligent investors, but then they also require an ecosystem of sophisticated trading strategies and tools [...] They need derivatives, they need options, they need to get a short sell, and if our markets can get these things, what will happen is that you'll no longer see this massive volatility,” — Charles Hoskinson, founder of altcoin Cardano (ADA)

“1) Either the innovation finds practical utility followed by years of steady and sustainable commercial progress and integration into the economic fabric (e.g., the Internet); or

2) The invention fails to achieve broad adoption and its commercial applications as medium of exchange are limited (e.g., the Segway),” — Adena Friedman, president and CEO of Nasdaq Inc.

“When it shot up high, I said I don't want to be one of those people who watches and watches it and cares about the number. I don't want that kind of care in my life [...] Part of my happiness is not to have worries, so I sold it all and just got rid of it,” Steve Wozniak, Apple co-founder, on selling all of his Bitcoin

According to an analysis by blockchain infrastructure firm Elementus, as much as $16 million in Ethereum and ERC20 tokens was stolen in the recent hack of New Zealand exchange Cryptopia. The exchange had originally reported that the losses were significant, without naming a specific number. According to the Elementus data, funds were transferred out of both core and secondary wallets from Jan. 13 to 17, while Cryptopia alerted police and the public about the hack by Jan. 15. Elementus’ investigations have found that around $15 million remains in the two wallets purportedly under control of the hackers, while about $880,000 has already been cashed out. 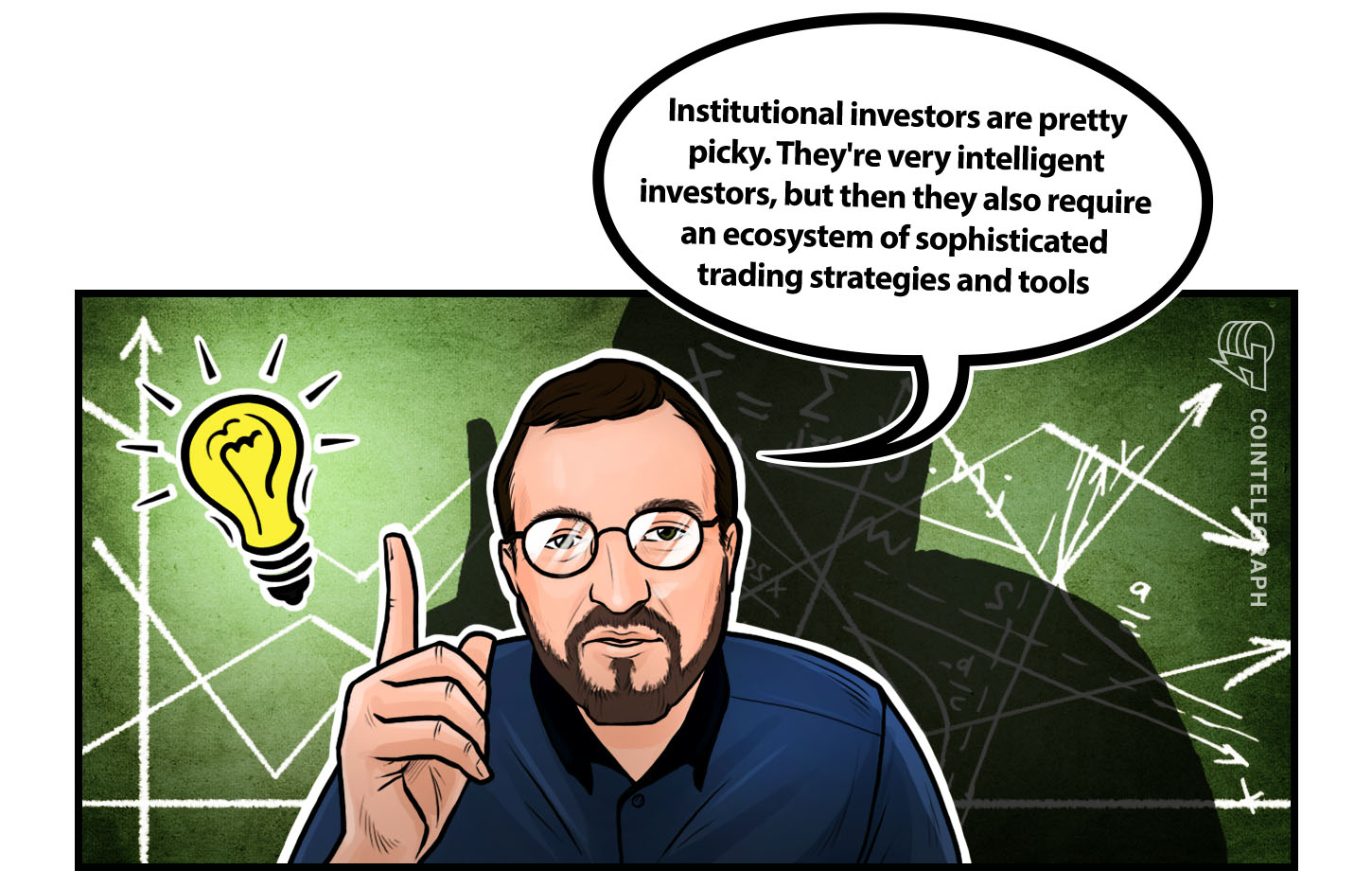 The Icelandic man accused of stealing Bitcoin mining equipment has received a four-and-a-half year prison sentence. Sindri Þór Stefánsson had been arrested in Amsterdam after reportedly flying to Holland with a stolen passport. Along with six other accomplices, Stefánsson received jail time after being convicted of the theft Bitcoin mining equipment reportedly worth $2 million, as well as two other attempted heists that took place December 2017 and January 2018. The group’s target was Nordic IT company Advania, to which all seven defendants will now pay compensation of 33 million Icelandic Krona (about $273,000).

A 36-year-old individual suspected of the theft of over $11 million in IOTA, as well as fraud and money laundering, has been arrested by the United Kingdom’s South East Regional Organised Crime Unit. The Hessen State Police in Germany, the UK’s National Crime Agency and Europol also helped with the arrest, following a search warrant carried out in Oxford, U.K. The suspect has reportedly stolen more than $11 million in IOTA from over 85 victims since January 2018 by using a malicious IOTA seed generator to lead users to private keys that he controls.

From the UK to Malaysia: How Countries Have Been Classifying Crypto Across the World

Following the U.K.’s release of a consultation paper for guidance on cryptocurrencies, Cointelegraph has released an analysis looking at how various country define and classify cryptocurrencies in the legal sense.

As a series of blockchains keep competing to release a scalable product, Cointelegraph looks at various transaction times from different projects, bringing up the question of how important transaction speed really is.

After a series of controversial figures have left mainstream crowdfunding sites in favor of raising money through cryptocurrency, Cointelegraph examines how the move to crypto works for both the creators and the crypto alternatives.