Bitcoin Breaks Above $7,000 as Crypto Market Rallies Into Green

Crypto markets are seeing strong positive momentum, as Bitcoin breaks above the $7,000 price point and the top 10 coins see growth of between 4.5 to almost 20 percent 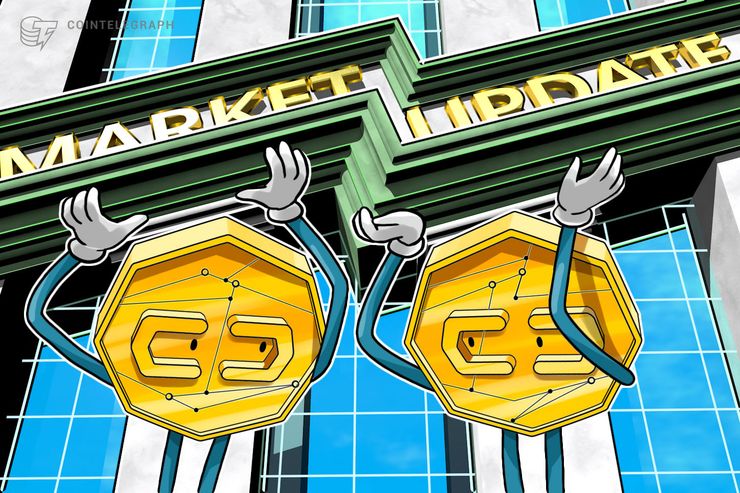 Tuesday, August 28: crypto markets are seeing strong positive momentum bolster a persuasive recovery, as Bitcoin (BTC) breaks above the $7,000 price point and all but 3 altcoins amid the top 100 cryptocurrencies post strong gains on the day. Growth among the top ten largest assets ranges between 4.5 to almost 20 percent, as Coin360 data shows. 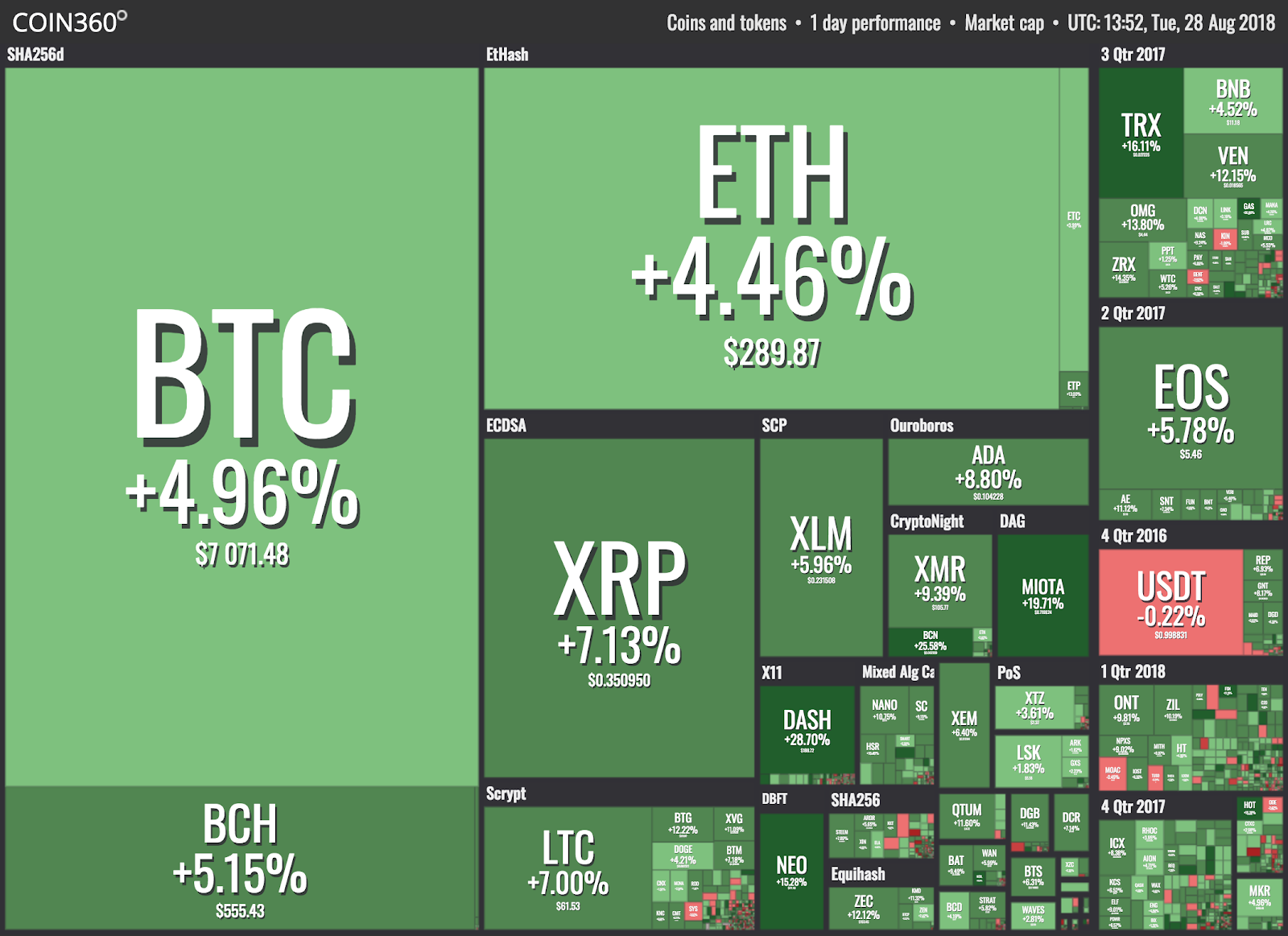 Bitcoin (BTC) is trading at around $7,016 at press time, up around 4.2 percent on the day, according to Cointelegraph’s Bitcoin price index.

The top coin has seen several days of recovery since its brief price dent August 22 in the wake of toughened anti-crypto measures in China and a fresh series of disapproval orders for several Bitcoin exchange-traded funds (ETFs) by the U.S. Securities and Exchange Commission (SEC). 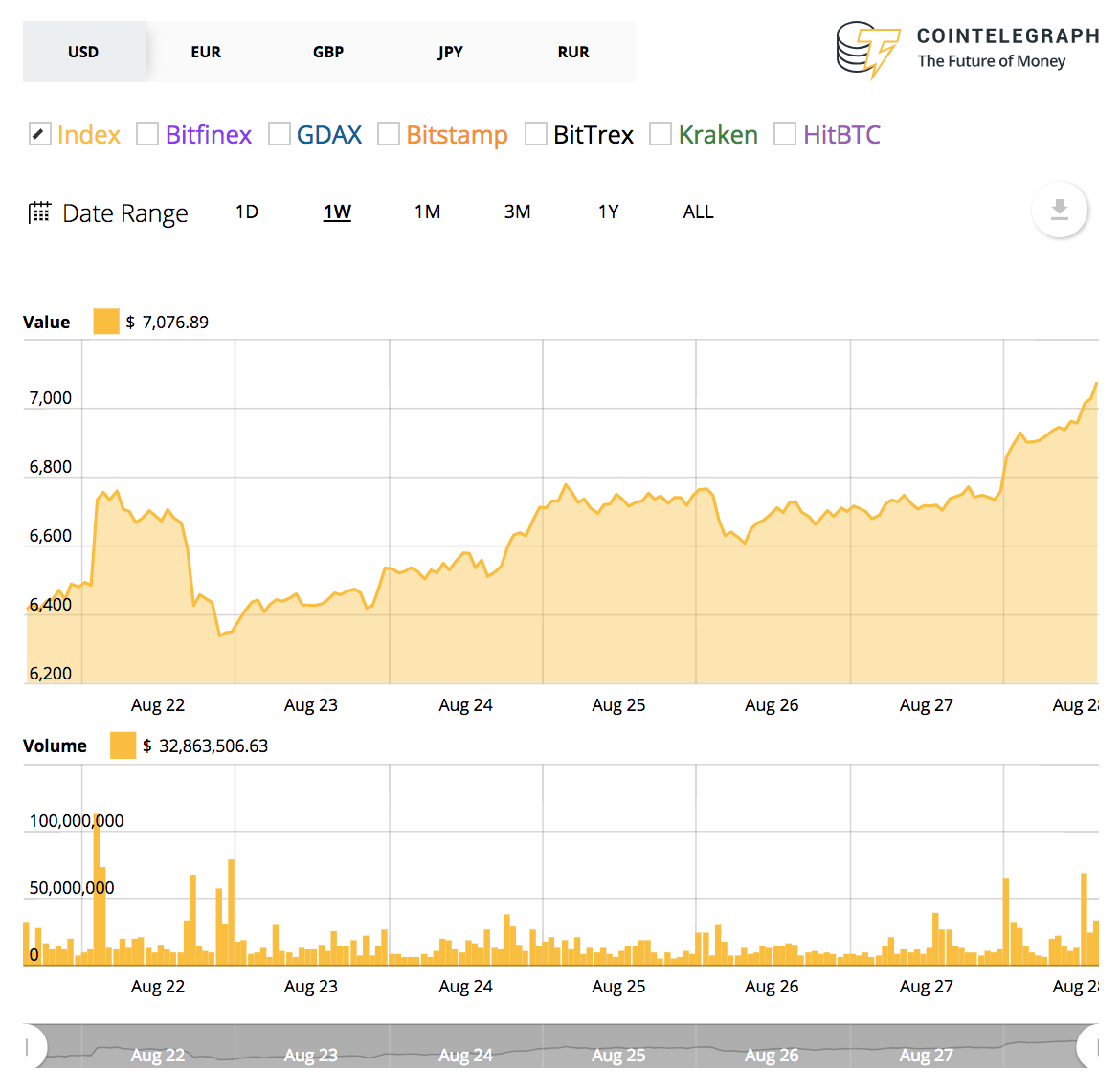 On the week, Bitcoin is up a strong 4.1 percent, with its monthly gains now around 9.1 percent.

While, the coin has yet to reclaim the $300 price point — which it last held August 20 — today, August 28, has seen the first persuasive upswing in price performance after a jagged and tentative week range bound between $270-280. Ethereum is now up 3.4 percent on the week; on the month, losses are just slightly down and remain at a stark 37.8 percent. 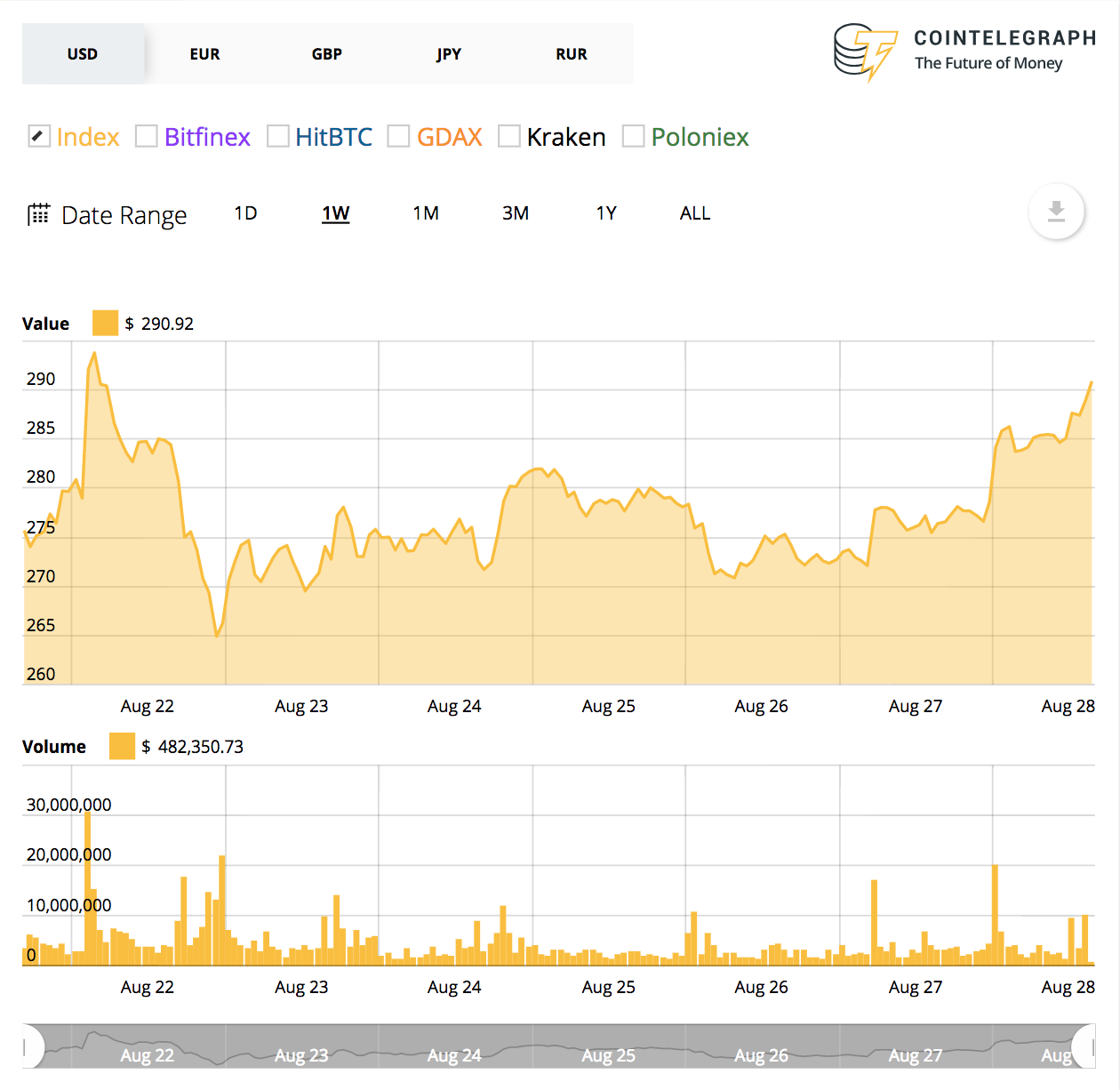 The strongest top ten performer is IOTA (MIOTA), soaring a staggering 19.4 percent on the day and capping two days of rapid growth to trade around $0.71 at press time. 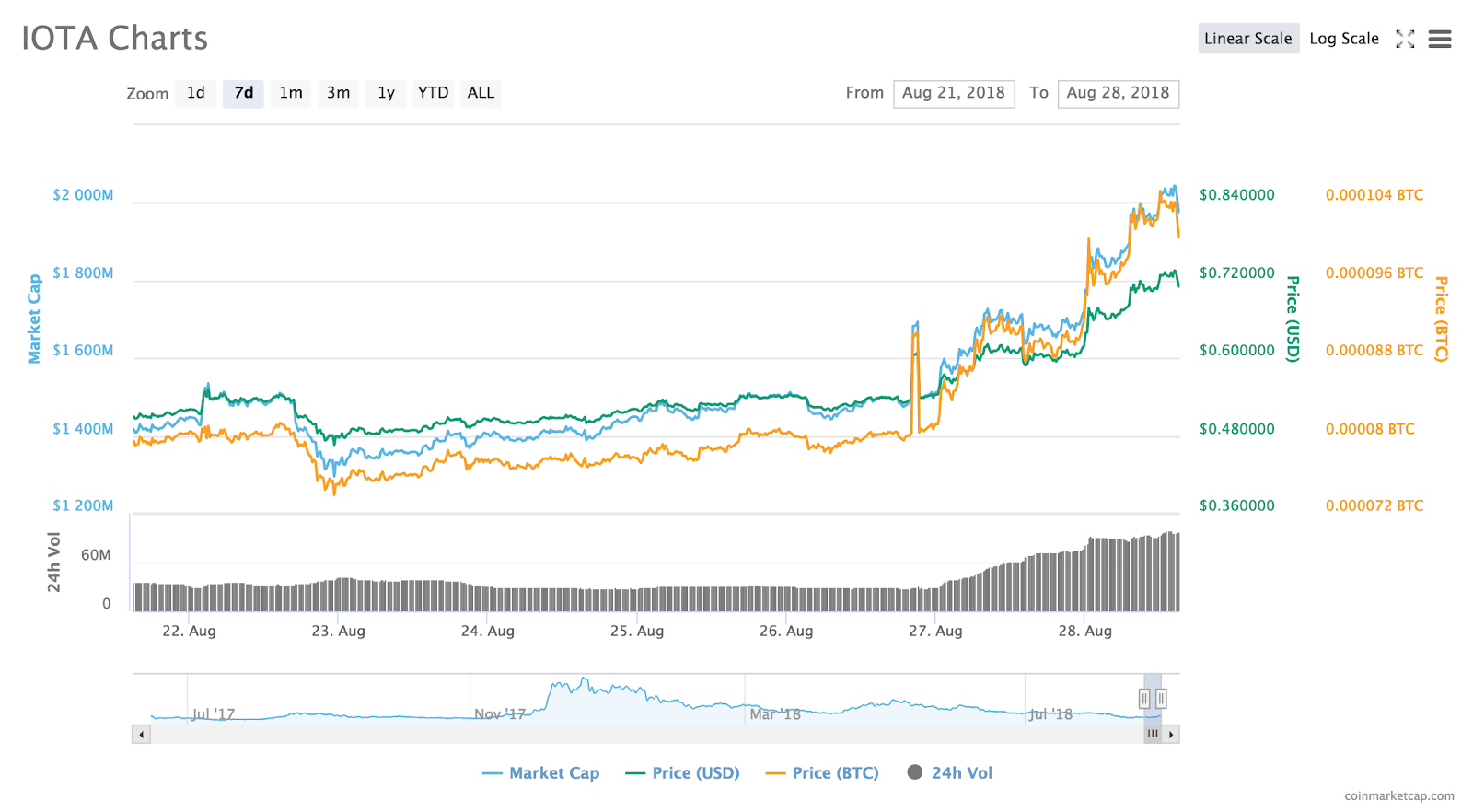 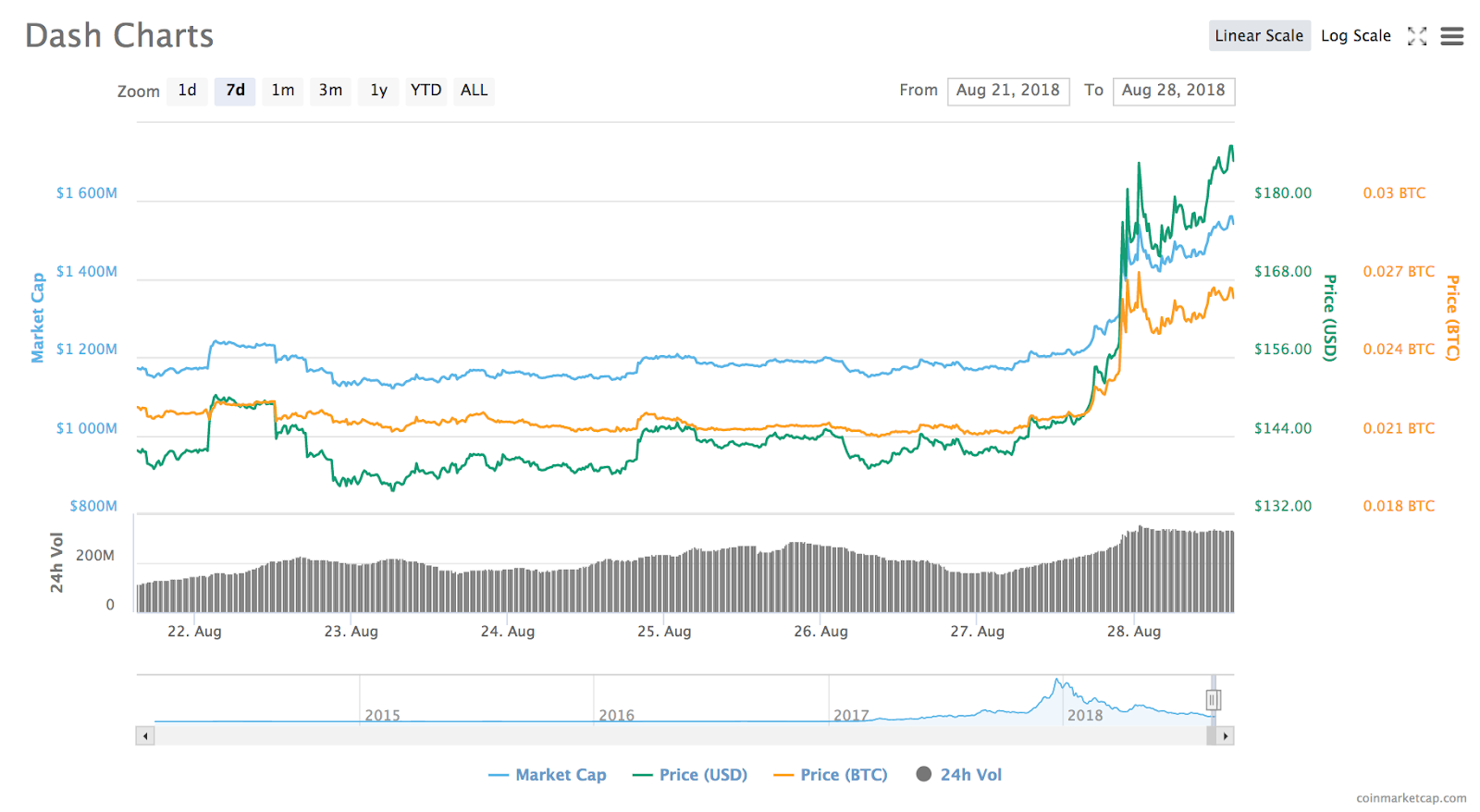 Total market capitalization of all cryptocurrencies is at around $230.55 billion at press time, up around $15 billion since the start of trading Monday 27th.

As the crypto spot markets rally, and Bitcoin reclaims ground above $7,000, fresh data from the U.S. Commodity Futures Trading Commission (CFTC) shows that bearish positions for non-commercial contracts of Bitcoin (BTC) futures are also on the decline.

As shown by the negative total tally on the CFTC’s latest Commitments of Traders (COT) report, the market is still overall net short, yet the new figure of -1266 indicates a sharp turnaround from the -1926 recorded earlier this summer.

Blockchain, meanwhile, has this week drawn the attention of two of the “Big Four” global audit firms, Deloitte and PwC, both of whose fresh reports revealed high percentages of enterprise executives convinced by technology’s potential.

To cap it off, the South Korean government has just announced its state-sponsored blockchain hackathon to encourage the technology’s inroads into the public and private sectors.